We've talked before about making dungeons awesome, building living dungeons, and developing fantastic locations but not yet about how to build lazy dungeons. How do the philosophies of the lazy dungeon master work for us when designing a dungeon? Where can we get the highest value when building a dungeon for the effort we put in?

Rather than simply give my opinion on the matter, I brought the question to Twitter and Facebook and did a bunch of reading on the topic to see what other people have to say on the matter. What I found was that there was no common way to build dungeons. Many DMs had many different ways they handled it. Some just improvise the whole thing. Others spend hours building beautiful dungeon maps in tools like Campaign Cartographer or Realmworks. Others used the five room dungeon idea, which trends closest to ways of the lazy game master with a small caveat.

So without any single common approach, I'm back to offering my best suggestions for what I've used, what I've seen, and what I've heard. The rest of this article will offer suggestiosn on how we might build the best lazy dungeon. 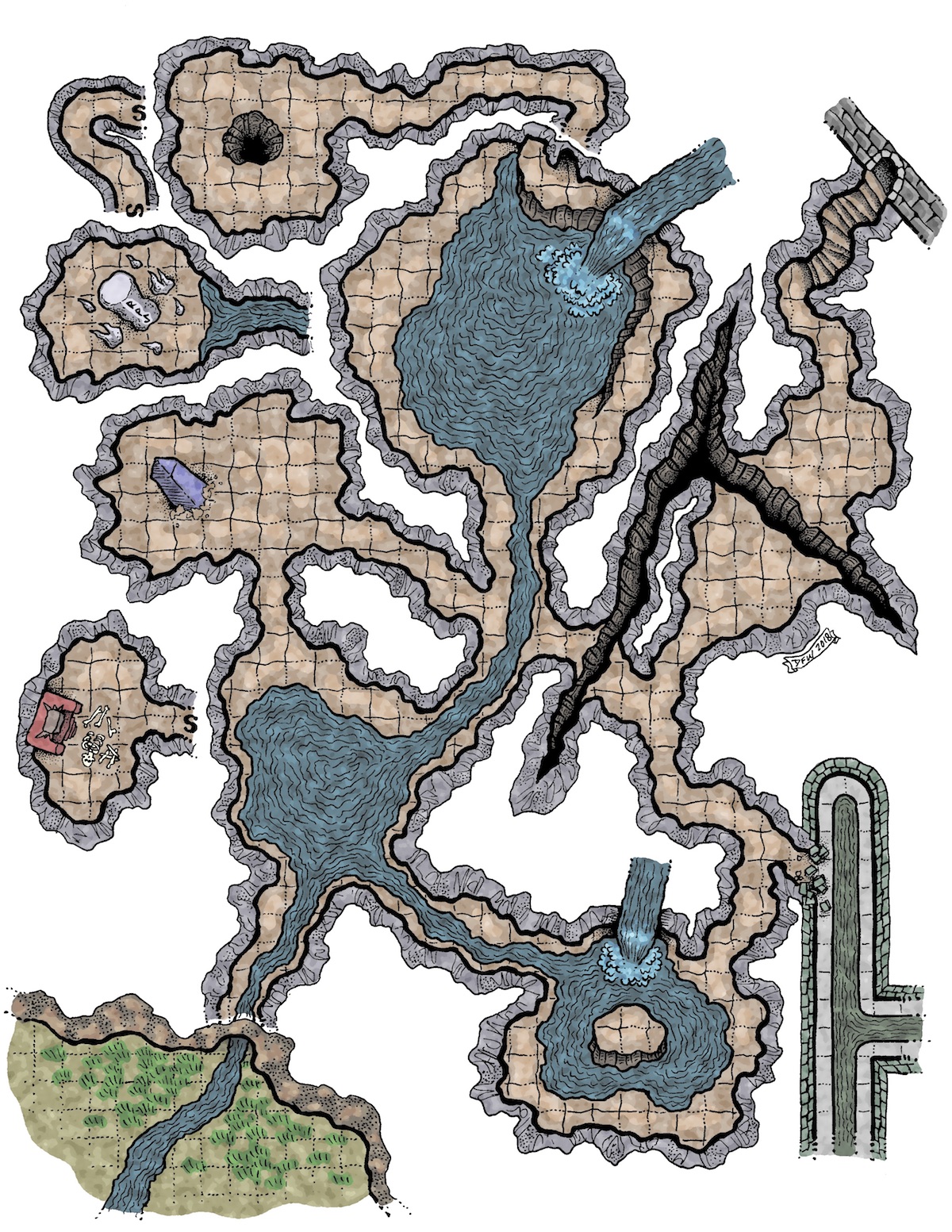 Inspiring Yourself with the Dungeon Master's Guide

Chapter 5 and appendix A of the Dungeon Master's Guide contains some excellent tables to give you some inspiration for your dungeon. If you don't have a dungeon already in mind, a few rolls on these tables can give you some ideas. Even if you do have a dungeon in mind, some of these tables can give you greater atmosphere. Maybe you know that the characters are going to head into some old caves, but maybe it's cooler if the caves were actually (rolls dice) used as a temple by cultists of a neutral diety who eventually destroyed themselves.

We're big on reskinning here at Sly Flourish. We can get great value by using beautiful maps drawn by brillaint artists instead of spending our own time on them. Chris Perkins talked about this in his article describing the Schley Stack. We can build our own similar archive using Google's Image search and looking for "Mike Schley maps" and "Jared Blando maps". Both artists also sell high resolution versions of their maps if you plan on actually using the map at your game.

We can grab just about any published adventure and steal the maps out of it to use in our own game. The Plunging Torrent map from Princes of the Apocalypse can represent an ancient flooded Abolith city laying beneath the Purple Rocks, for example. Stealing dungeon maps from old adventures is one of the best ways to squeeze the value out of the adventures we buy.

The Dungeon Master's Guide and Volo's Guide to Monsters both include excellent maps for a variety of situations. The cartographer Dyson has a huge collection of royalty-free maps that fit in any situation and Elven Tower who did cartography work for the upcoming Lazy DM's Workbook has a Patreon for his wonderful maps.

When we think about a dungeon in our game, we really only need to think about the parts of it that will come up in our very next session. We don't have to build out a multi-layer hundred-room monstrosity when our players will only see about 5% of it. Instead, we can think about what rooms and chambers might come up in the next session we run. When we think of these chambers, we do so using the same concept we've used for building fantastic locations. We give each important chamber an evocative name and then give it three interesting and usable aspects. For example, we might have the Squirming Charnal Pit with the three aspects deep central pit, necrotic runoff from above, and statues of the old pitkeepers.

If we're having trouble coming up with interesting features, we might use the random monument generator for some inspiration.

Depending on how long our session goes, we might write out five to ten of these locations. We'll need one for roughly every half our to hour of gameplay.

When we have our locations we can write down the names on a piece of paper and draw lines between them to show the hallways that connect them. We might even give these hallways their own aspects and secrets to discover. We can always throw in random traps if the pacing seems right for a fearful beat.

This whole process can be done in about fifteen to thirty minutes.

When we're building out a dungeon like this, there might be numerous smaller rooms that make sense for the dungeon itself. Everybody poops, so any humanoid habitat is likely to have a privy of some sort. We don't need to make it a fantastic privy (although that doesn't sound like a terrible idea), its just a privy. We can list out maybe an extra half-dozen such utilitarian rooms to fill out the dungeon itself. These extra rooms, of course, will depend on how the dungeon was as originally constructed. Most great dungeons were something else before they became dungeons. What they were before and what they are now are often two different things.

On the Five Room Dungeon

We'd be remiss if we didn't talk more about the ideas of five room dungeons. This thematic look at adventure design through the five chambers of a dungeon fits well with the philosophy of the lazy dungeon master although we don't have to stick to five rooms and we don't need to worry too much about those chamber themes. The original five-room dungeon idea suggests that we build particular encounters in a particular order (entrance with guardian, puzzle or roleplaying challenge, trick or setback, big climax, reward and revelation). Instead we can build situations for the dungeon and let that situation, and the character's approaches, evolve as the characters explore the place.

Focusing on What's in Front of the Characters

The key to making things easy on ourselves and still building a fantastic and realistic world for our players is to focus on what their characters can see and what is just over the horizon. We might have dreams of twenty-level deep megadungeons but all we really need is a cave entrance, a chamber with a fantastic monument in it, and a waterslide into a roaring underground river filled with ropers to keep things exciting. A few notes and a few connecting lines is enough to keep the adventure moving forward.

Special thanks to David Hartlage of the DM David Blog and Matthew Neagley of Gnome Stew for putting the seed of this topic in mind.