So why did I back the Kickstarter? I'm hoping to use these in a new way, a lazier way, and today we're going to discuss my hypothesis in how the Lazy Dungeon Master might make the most from the Dwarven Forge Game Tile Kickstarter. 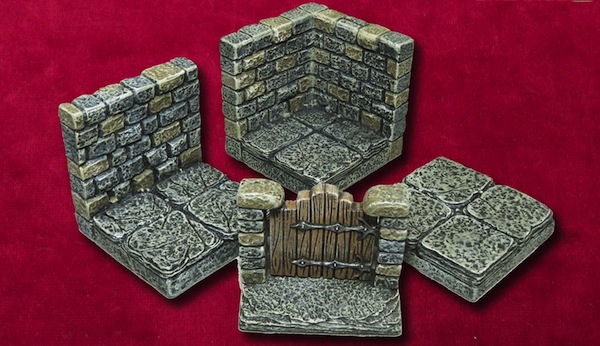 One of the great ideas Stefan and his team had with the Game Tile Kickstarter is focusing on only four basic pieces: the wall, the corner, the floor, and the door. A good number of these four pieces can build an infinite number of potential layouts for your game. Beyond keeping the manufacturing costs reasonable, these four pieces help keep DM's lives simple by giving us only four items to choose from when building out a room. Unlike Dungeon Tiles we don't have to go poking through a thousand tiny pieces to find just the right one. With four clearly distinct pieces we know exactly which piece we will want at any given time.

There are definitely disadvantages to having so few pieces. It's hard to ensure each layout doesn't look exactly the same as every other layout. To help with this, we'll need to accessorize!

There are lots of ways to make your Dwarven Forge layouts unique. We can go back to our unused boxes of Dungeon Tiles and pick out lots of interesting floor tiles such as magic runes, circles of blood, thrones, fire pits, and others. Though these tiles aren't 3d, we can make them pseudo-3d by placing them on a raised floor piece. This works well for thrones and fireplaces and the like. Use a tiny piece of sticky tack to keep the tile from sliding around on the Dwarven Forge floor piece.

To stay lazy, keep a baggie of the most useful dungeon tiles and dungeon dressing miniatures at hand so you can build out a room without a lot of poking around or having to plan it out ahead of time. Spend your time preparing to improvise instead of planning out details in something your players might never see.

The proposed durability of these new Dwarven Forge pieces also help us lazy dungeon masters by ensuring we don't have to take too much care of them. As demonstrated in the video, we can likely just stick the whole sets in a plastic basket or even a big bag near our play area. When the party enters a room or a section of a dungeon, we can just whip out the pieces we need, build it up real fast, and run it in place.

Dwarven Forge pieces have always been rugged. I've long since stopped using the foam boxes to store them and just stuck the whole sets in a set of plastic boxes on shelves. Still, I've taken enough care of them that I haven't been able to simply build a layout in the middle of the game. I'm hoping that can change with these new tiles.

My overall goal and desire is to be able to build interesting dungeon layouts as I need them during the game instead of trying to build out complicated layouts ahead of time. I dream of keeping a plastic basket next to the table. When I need a room, a hall, or a simple layout, I can pull out the pieces I need and build it like a game of Bastion.

How Many is Enough?

It's hard to figure out exactly how many of these sets one should pledge on. I ended up with two painted sets figuring that, by the end of the Kickstarter, it will end up more like three. Five is probably too many to easily store. One set probably isn't enough to build a good-sized room or a series and network of hallways. If you can afford it, I'd go for two sets, either painted or unpainted. I haven't seen the unpainted but they look good in the pictures. I imagine they would work out well enough but the painted are very nice indeed and fit well with existing sets.

An Experiment in Lazy Dungeon Mastering

I don't have these new game tiles in hand yet so I don't know if my experiment in using them as an aid for the Lazy Dungeon Master will work well or not. It will likely be nine months before I know for sure. In the mean time, I'll ponder and dream and use my existing pieces to see how it works out. Once I know for sure, I'll rewrite this article based on my actual experiences.

Subscribe and get the latest Sly Flourish article to your email inbox each Monday morning.