A while back I talked about how to get back your players' attention. In it I briefly describe holding a player's attention by keeping them busy at the table bu running your table like a three-ring circus.

In-battle skill challenges are a great way to add another layer to your battles. You can use them to protect your elite bosses. You can use them to tie into devastating environmental effects that challenge powerful parties. They even help you speed up a battle by giving you a way to end the battle early. In-battle skill challenges are easy to set up. Add a component to your battle that can be controlled through some sort of manipulation like athletics to smash it, thievery for careful manipulation, arcana for tapping into magical energies, religion to remove evil forces, or history to decipher ancient text.

Add two or three skill checks per item if you have multiple items or more checks if you have only a single one. Give players the option of using standard actions or minor actions. Using a minor might require rolling against a higher DC or might result in damage if they miss (my favorite). Succeeding in the skill challenge might alter the environment of the fight, remove combatants, remove protections, or give the PCs some sort of great advantage. They might even end the fight completely.

In-battle skill challenges are a great additional variable to add into any large battle.

You can also use these out-of-turn skill checks for things like learning which monster leads the others (and thus will end the fight sooner when killed), what the strange markings on the walls might mean, or learn a little more about the story for your adventure. Perception, dungeoneering, history, or insight checks work very well.

It might take your group a little time to understand what you're doing. Some players expect to be the center of attention on their turn and will not understand what's going on when you're asking another player to roll a die. Explain to them beforehand how you run off-turn skill checks and that it shouldn't interrupt anyone else's turn.

Physical or mental puzzles are a third component you can add to your game. Interesting word riddles might get your players working on a solution while others are busy smashing orc heads together. Symbol-based Sudoku or Strimko puzzles work very well for interesting arcane rune puzzles. Just replace the numbers with a symbology of your choice and prepare two versions of the puzzle. One with just the symbols and one with numbers should they perform the proper history or insight skill check. 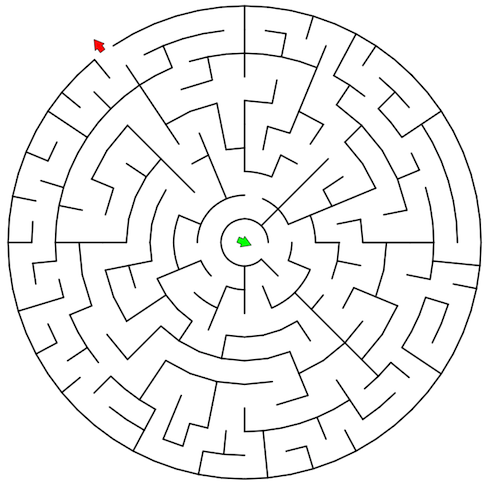 Maze puzzles, like the one pictured, can work well as a lock picking puzzle. An easy child's maze can be tossed to your thief who must find the solution in a set amount of time (like 30 seconds) or they suffer the penalty of the trap.

Your players who most enjoy these mind-bending puzzles can focus on the puzzles while your more tactical players work together to defeat the combat challenge in front of them.

Bringing it all together, the Chamber of the Guardian

Now we'll put this all together into a single level 6 encounter. Let's build a room deep in an ancient dungeon. Within this room you have bladed pillar traps and four piles of ancient armored corpses. When the party enters the room, necrotic gasses pour down on the bone piles from vents up above. Skeletal minions (Monster Vault Skeletal Legionaries) begin to animate from these bone piles and attack the party along with a four-blade-wielding skeletal guardian boss (Monster Vault Skeletal Tomb Guardian).

Characters trained in religion can attempt to sanctify a bone pile with two standard action medium difficulty religion checks. They may instead use minor actions but against the hard difficulty DC. Failure results in multi-target damage at the encounter's level.

All around the room are strange violet gems that flash and fade at different points in the conflict. Characters trained in arcana, religion, heal, or history can perform hard DC skill checks off turn to recognize that these gems are flashing in time with the fear and pain felt by the party. This room, it would appear, is powering off of the negative emotions of the characters!

In one alcove of the room, a mechanical construct clicks repeatedly. A medium DC insight, perception, or dungeoneering check reveals that this mechanical construct controls the flow of the necrotic gas that animates the skeletons. A character trained in thievery can attempt to disable the mechanical construct that controls the necrotic gasses that animate the skeletons. It takes two standard action thievery checks to open the construct which reveals a complicated mechanism. At this point, the DM should hand over the maze pictured above. The player has 30 seconds to complete the maze without touching any lines or any backtracking. If he or she succeeds, the skeletons stop spawning. If it is late enough in the battle, the skeletal guardian too will fall and the chamber doors open. 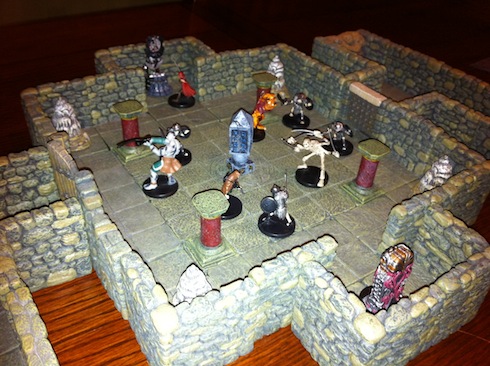 What we're left with is a single encounter with many possible variables. We have monsters to fight, we have puzzles to solve, we have knowledge to learn off turn, and we have skill challenges that help end the battle early. Use this as a model for some of your more complicated encounters and you're likely to keep all of your players drawn in and focused on the parts of the game they like the best.