What to use to represent characters and monsters when running combat in D&D is a constant and continual conversation among D&D enthusiasts. Some swear by a large collection of pre-painted miniatures. Others, myself included, claim you can run large elaborate battles with nothing but a quick diagram on a sheet of paper and some good narrative. A great many DMs and players prefer candy.

While many prefer pre-painted plastic miniatures, they suffer from a few problems. First, building a collection can be very expensive. Second, it always seems like you're missing the one miniature you need. Third, organizing, sorting, and pulling out miniatures can be very time consuming.

If you'd prefer a video on this topic, you can watch this ten minute YouTube video on crafting lazy monster tokens. 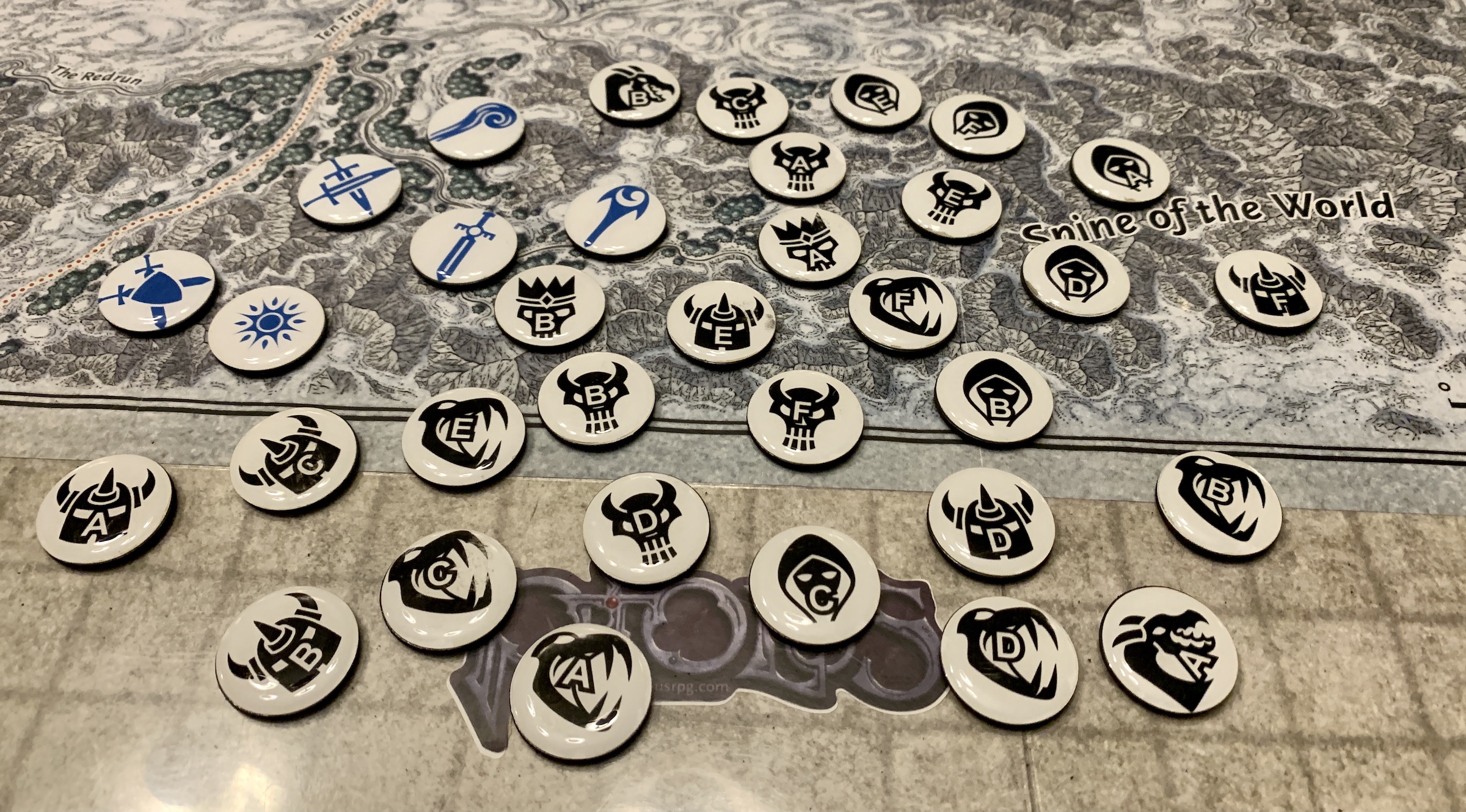 Here's the material you'll need to build up to two sets of monster tokens:

Here's how to build the tokens:

If you want to make double-sided tokens, you can use a glue-stick to stick monster tokens back to back. If you're going this route, stick cultists to beasts, helms to skulls, and crowned skulls to dragons. Stick them together in reverse alphabetical order so your As are glued to your Fs, your Bs to your Es, and so on. This way you can use two different kinds of tokens and still have them each start with A, B, and C.

When complete you'll have a set of 34 tokens: 6 adventurer tokens, 4 boss tokens, and 24 monster tokens. The monster tokens can represent humanoids, monsters, undead, and spellcasters with the skulls filling in for anything weird. The crowned skulls and dragons represent boss monsters.

As a cheap alternative, ask players to email you an online image of their character. Then you can scale, print, trim, punch, and turn that image into a token using the same steps above for making monster tokens.

If you're running single-session games and don't know what character classes players will choose, use the generic blue adventurer tokens from the PDF.

During the game, when a character damages a monster, ask the player to identify an interesting physical characteristic of the monster they hit that starts with the letter of the token. Thus, the ghoul represented by the skull A token becomes the "ghoul with an arrow in her head". This way you have an in-game narrative that connects the story of the monster with the token. Skull A is a ghoul with an arrow in her head. Skull B is the ghoul with the bones sticking out of his back. Skull C is the ghoul with the caved-in chest, and so on. This is far better than fighting "ghoul A".

There are a few ways to represent large monsters using such tokens. Some DMs prefer to use a 2" miniature base or a 2" wooden disk from the local hobby store. Put the 1" token on top of the disk and now it's a large monster.

An easier way is to simply say "this is a large monster" and treat it accordingly. If you're playing on a flip mat, you can place it in the center of four squares or draw a circle around it.

A Simple Tool to Help You Tell Epic Stories

Having a small set of generic monster tokens fits well with the philosophy of the Lazy Dungeon Master. These tokens give you the flexibility to run just about any battle right at the moment it takes place. They reduce your prep time, keep your costs down, and give you what you need to improvise at the table. Even if you have a substantial miniatures collection, a set of lazy monster tokens can help fill in the blanks when you need it.

Stay nimble and let epic stories unfold at your table.

quick diagram on a sheet of paper and some good narrative