The Dam of the Besilmer Kings

This is a scenario intended replace the Triboar encounter in Storm King's Thunder in which a pair of fire giants attacks the town seeking a piece of the huge armored war machine they want to use to gain control with the shattering of the Ordening.

This scenario makes use of the Dam of Kings location in Sly Flourish's Fantastic Locations.

In this scenario, the dwarven armorer of Triboar, Ghelryn Foehammer, asks the adventurers to take him to the Dam of the Besilmer Kings to seek out the mysteries of the Ostorian giants. The Besilmer dwarves had long studied these ancient giant artifacts.

When they arrive at the dam, the adventurers discover that a fire giant is laying siege to the dam, hammering into its surface and battling a clan of gnolls who have used parts of the dam as a lair in worship to Yeenogu. Within one of the vaults of the dam resides a pauldron of the giant war machine the fire giants hope to restore, a machine known as the Vonnindod. The party must get past both the giant, his war party, the gnolls, and other creatures within the dam before reaching the pauldron. Then they must figure out what to do with the five ton piece of metal. 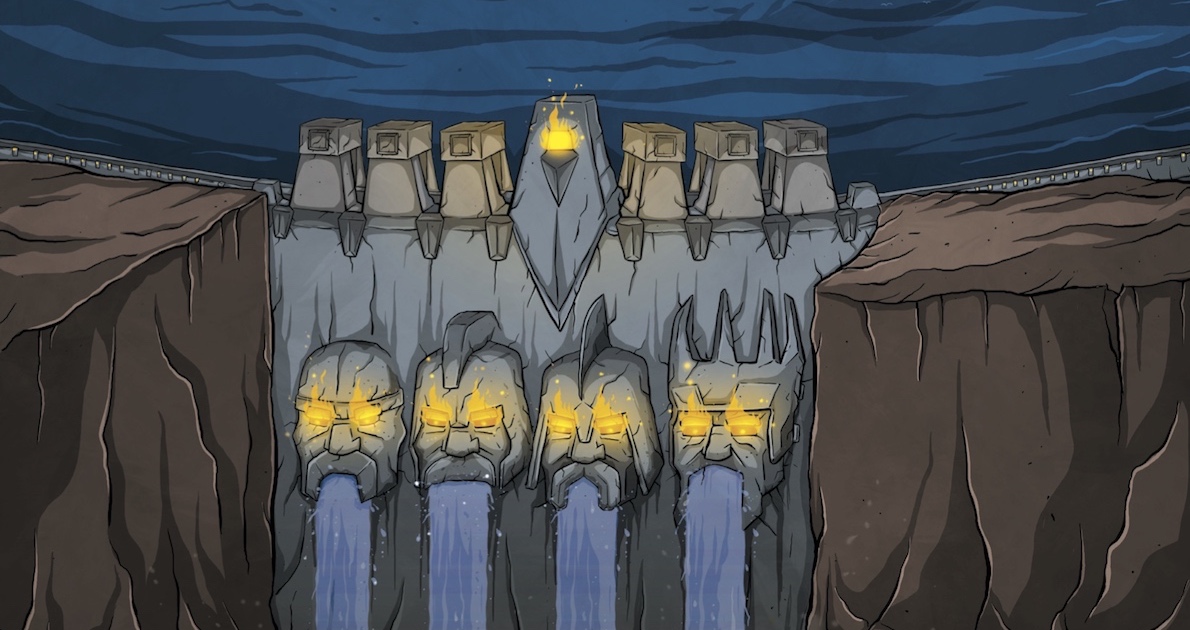 Start: Assault on the Dam

As the characters approach the dam, they see a fire giant hurling rocks at the keep in the center of the dam. Barbed arrows with black fletchings have killed a number of orcs, fired from the keep. A few rock tosses routes whatever enemies the fire giant is facing. He proceeds to get closer to the keep and start smashing his way in with a great hammer. Every so often he takes out a rod from his belt and waves it over the area, nodding to himself and ordering his orcs to enter the dam through great cracks he has created in the dam's surface.

How the characters get past the fire giant and his orc mercenaries is up to them. They might sneak or deceive their way in or find another entrance.

The dam itself has the heads of four dwarven kings on the side facing Triboar. One of these mouths is open and spews water into a thousand-foot-high waterfall to the stream below. It is possible to repel down and into the mouth. It is also possible to swim below the great reservoir on the other side of the dam and find one of the huge entry vents. The vents are covered with centuries of debris that is pressed up against huge iron bars in front of the huge water intake. The suction is immense.

Locations of the Dam

For the first few hundred feet of the dam, the fire giant has stationed orc guards to ensure they are not flanked by another force. These orcs are only moderately perceptive. If they see intruders and have trouble dispatching them, they will call to the giant who will come over and attempt to crush the adventurers by collapsing the twenty-ton stone roadblock on them if they will go under it.

The central keep has been under siege by the fire giant who has hurled huge rocks at it, crushing much of the structure. A handful of gnolls still attempts to fight them off but many of them have been crushed to death by the boulders. The upper floor of the two-story keep has a steep drop-off that falls 1000 feet to the streams below. Deep cracks in the stone floor of the lower level of the keep lead to the chambers below.

The gnolls have set up a small camp in the huge chamber that houses the waterworks of the dams. Four giant trenches are intended to bring water through the dam and power huge machines deeper in the dam itself. Three of these trenches are dry, their doors closed on either side and controlled by a complicated set of iron levers on a nearby control platform.

The gnolls have set up a small camp within one of the dry trenches where they feast on the remains of a clan of svirfneblin they have hunted throughout the dam. A handful of deep gnomes are imprisoned, some of them with limbs amputated, by the gnolls who use them as food and sacrifices to the demon prince Yeenoghu in the Ostorian Vault (found below). One of these, the svirfneblin loremaster, Gavren, knows much of the dam, the dwarves, and their discoveries of the giants and is willing to lead the party deeper into the dam if the characters free the remainder of his clan.

A band of svirfneblin had made an excursion from the underdark into the dam of kings, using their rock-forming ways to open up a passage from natural tunnels into the worked stone of the dam. Within the tunnel is a small svirfneblin campsite. The svirfneblin formed small burrows in the walls of the cavern and a built pillars that look like naturally forming pillars of stone except for their impossible uniformity. Within the center of the camp is the site where the gnolls slaughtered most of the svirfneblin, devouring their bodies and leaving their destroyed corpses and bones in a terrible pool. A pack of hyenas are still in the camp, seeking any remaining svirfneblin and continuing to gorge on the remains of the corpses.

The Hall of Giants

On the path to the Ostorian vault, the Besilmer dwarves built a hall of brilliantly-carved frescoes of the giants. It depicts giants of all types, in the order of the Ordening, from hill giants to storm giants. One of the carvings depicts a stone giant placing a crown on a dying stone giant queen (a hint about the Dodkong, the stone giant lich). This hallway is trapped with a lightning glyph that sends bolts of lightning the hall, electrocuting any who stand in the water. A number of gnolls were killed by the trap, leaving their electrocuted bodies floating in the water.

This vault contains the Ostorian artifacts of the Besilmer dwarves. Murals hang on the wall depicting the empire of the giants and their war with the dragons. Huge weapons hang crossed on the walls and enormous suits of armor stand in the corners. Great statues of the giant kings of old stand in the center of the swamped chamber, some having crumbled to dust. On the far side of the chamber sits the huge black-iron pauldron that the fire giant sought. It weighs nearly five tons and cannot be easily dragged through the small chambers of the dam. What the characters do or how they get it out is up to them.

The clan leader of these gnolls, a flind named Soulrend, has built an altar to Yeenoghu. He and his remaining gnolls will fight to the death, screaming that their lord has returned to the world and hunts in the underdark (a hint that things still aren't right in Out of the Abyss).

A Model For Your Own Adventures

This adventure outline is intended to give you a usable replacement to the fire giant encounter at Triboar but is also intended to show you a different way to think about adventures. It focuses on where the adventure starts, what secrets and clues the adventurers might find, and what interesting locations they might discover. Hopefully it serves either to give you a usable small adventure or stir your own mind when you think about how you put together adventures yourself.