The HBO series Deadwood is one of the greatest examples of organic storytelling. There's no central plotline or story to Deadwood. This isn't Battlestar Galactica or Lost which pretends to have a story but really doesn't. Deadwood is a story about people. We watch this show because we love the characters and we love the unpredictable ways they interact.

This sort of organic storytelling can breathe life into our D&D games. Instead of plotting out a story, we can focus on deep and interesting NPCs and how they smash against the heroes of our adventure in new and unpredicatable ways.

In this article we're going to look at three villains from Deadwood and discuss how they might act and react in your unpredicatble character-focused D&D game.

The portrayal of the gold mining emperor, George Hearst, is that of a driven and ruthless man. He has one goal: to find and extract "the color", his term for prescious metals, particularly gold. Anyone who gets in his way gets crushed.

Hearst is an excellent villain, one perfect to reskin and stick into your game. Good villains have a real purpose for what they do, something that they seek that pushes them over the edge. Like Hearst, they might appear warm and intelligent only to drive a mining pick into your hand should you frustrate them. Even physically, Hearst makes a great model. He's an overweight bearded man with a back pain that pushes him into fits of fury beyond his own intelligence. His sidekick, Captain Joe Turner of the Pinkertons makes a perfect sub-villain as well. 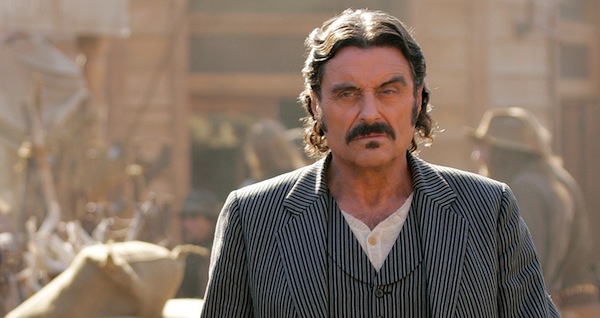 Though difficult to categorize as a villain, Al is no doubt a ruthless man. He is both smart and murderous, always seeking the upper hand whether it's in a duel of tongues or blades.

In your D&D game, Swearengen might be a perfect dark quest-giver. He might be the character giving instructions to the party, a necessary evil one must follow for a greater good. When building a character like Swearengen, you'll want to ensure he never pushes the party too far against their morals but still seeks his own opportunities for profit. An NPC quest-giver like Swearengen isn't afraid to send two groups after the same treasure to see which one becomes the victor.

Swearengen's dialog always dances outside of the traditional paths. He seek to unbalance those who speak with him, whenever possible. "Do not repeat back to the the things I say in different words".

Wolcott is probably the worst villain in all three seasons of Deadwood. He's a murderer of women who manages to use his business ties with Hearst to hide from justice.

As a villain in your game, Wolcott might be the same murdering psychopath we find in the show. Perhaps, in the world of Eberron, he is a murderous Dragonmarked noble of a house the PCs don't want to cross. The key is to make him as untouchable as possible but still clearly a villain the PCs despise and deal with.

Deadwood, a pool of NPCs

Deadwood is full of wonderful characters to steal for your campaign. It is the perfect example of a show driven by the actions of characters instead of the stories of the writers. Characters in Deadwood might appear stereotypical on the surface, but a deeper look reveals some wonderful meaningful characters that might bring new life to your game.

In case you missed them, here are some other excellent D&D articles posted over the past couple of weeks: