What if we combined the reverse-clues of Memento, the dreamscapes of Inception, and in-media-res clue-gathering scenes from the video game Return of the Obra Dinn into a model for dream-based investigations? Let's take a look how that might work in an Eberron game. 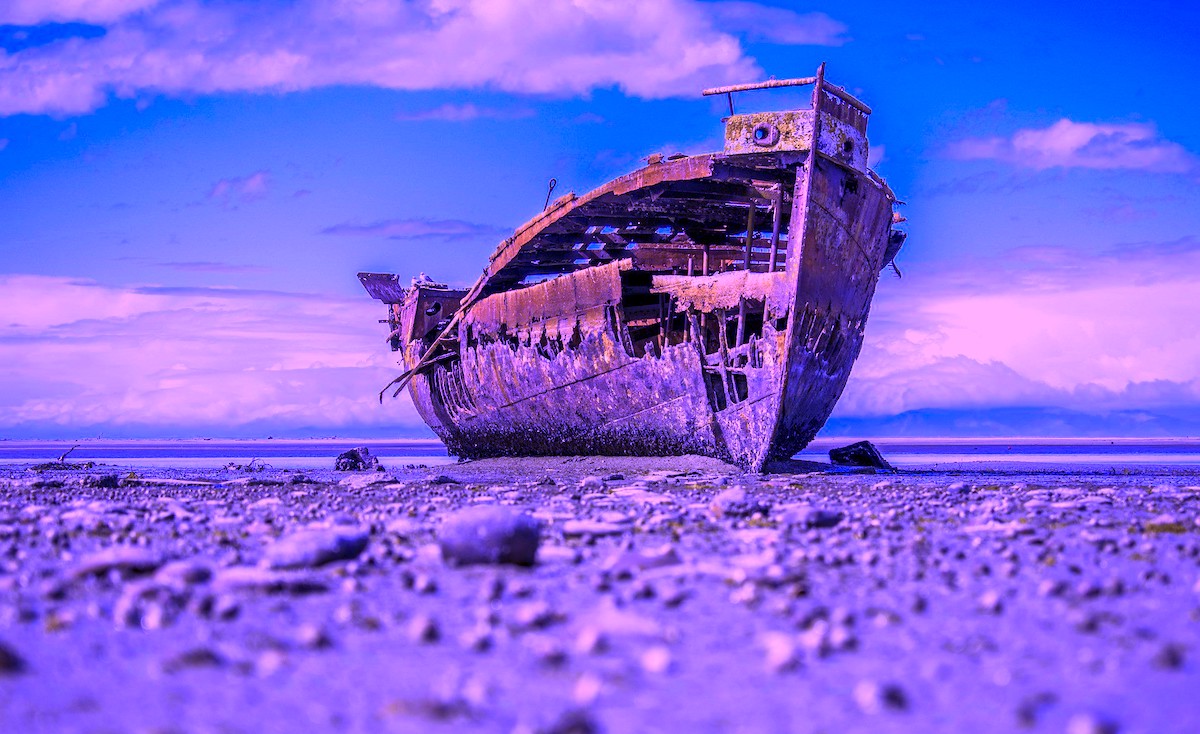 The Situation: A Ghost Ship on the Edge of Dal Quor

Our story begins as the characters head to the Northern Wind, a ghost ship in the docks of Sharn returned from Xen'Drik. Leto Skalle, a gold-ringed member of the Aurum, financed the ship's journey and the expeditions of its crew into the ruins of the arcane giants of Cul'sir. On it's return, Leto Skalle's mercenaries took what it brought back and left the ship and its crew to rot in the docks below Sharn. The characters travel to the ship to learn what happened there, what the expedition brought back from Xen'drik, and why no one has seen the crew since it returned.

When they arrive on the ship they begin to realize that the ship rests on an unheard-of manifest zone between the world and the dream world of Dark Quor.

This investigative model steals from three angles of storytelling from three sources of fiction; two movies and a video game. First, we're going to model our descriptions of the borders between worlds from the movie Inception. As the characters step into the borderlands they see huge buildings seemingly built of sand. They turn and watch a life-sized model of Sharn collapse as a billion tons of sand crash down from a falling tower. They look out over the sea only to see see a stretch of blue-gray sand swirling in ethereal breezes and crawling with powerful and tormented sorrowsworn. The dream-like state of this borderland can be fueled with the strange twisted nature of the dreamscapes in Inception. We can, if we want, even play with the dilations of time between layers of the dreamscape if we wish. Perhaps the characters spend days, months, or even years in the dreamscape only to return just moments from when they left the real world.

As the characters explore the ship, they come across clues. They find a severed and torn hand on the ground. They find bloody handprints on bars of a doorway meant to prevent a mutinous crew from reaching their captain. They find a strange three-bladed dagger forged by the Sulatar drow. They find a scrap of the contract between Leto Skalle, the captain of the Northern Wind, and the Tharashk dragonmarked explorer who would locate a sought-after Xen'drik ruin and the mysterious power contained within it.

We could reveal these clues in reverse order, as in the movie Memento. First, we see Leto Skalle's mercenaries removing their treasure from the hull of the Northern Wind while sealing up the remainder of the crew (including the characters) with the ghouls who have taken over the ship. Next the characters learn of the fate of the captain of the ship as the mutinous crew attempts to capture and eat him. Next they learn of the Sulatar drow attack on the expedition, an attempt to return what was stolen from the ruins. Next they find themselves in the ruins itself, drawing a huge Eberron dragonshard from a black-iron vault kept in the center of the giant ziggurat. Next they locate the ziggurat itself before being attacked by ankhegs. Next they find themselves at the mysterious dock on Xen'drik where an old hag curses them and hands them a scarred coin. Next they find themselves on the docks of Sharn negotiating their journey with the same Leto Skalle who, months later, would leave them to their deaths.

Each step happens in reverse order, giving the characters (and the players) a piece of the mystery. They learn of the end before they get to the beginning. Only when they reach the beginning do they have the whole picture.

This can all take place in the first person. As in Return of the Obra Dinn, the characters witness the situation themselves. The dreamscape of Dal Quor pushes them into these scenes where they must defend themselves from ghouls, cannibal mutineers, murderous shadow assassin drow, giant wraiths defending the shard, and ankheg defenders of the ziggurat. The characters feel the press of the scarred coin in their hand. They bear first-hand witness to the fated agreement between the crew of the Northern Wind, the Finders Guild, and Leto Skalle. They see it all.

It's tricky to ensure that dream-based investigations still give the players agency over the story. Because these dreamscapes often look at past events, our instinct is to ensure the characters don't change the past. Aside from the biggest events taking place in the past — the things already true in the current world — we might let them change the past and use it to shift the current and future story in ways that were already not solidified.

For example, as the characters are swept through the dreamscape realm of Dal Quor in our Eberron game, they witness an expedition in Xen'drik recovering a huge Eberron dragonshard kept in a vault within an arcane giant ziggurat. The giant wraith guardian of the shard (a wraith with double hit points and two attacks instead of one) animates and attacks. The character's can't actually prevent the expedition from getting the shard; the shard is already in the possession of the campaign's villain in the current day; but the characters have agency to destroy the wraith however they wish including dropping the huge black iron sarcophagus lid on the giant's skull head; shattering it and leaving an artifact intact in the actual present. Like the fortune telling scene in Curse of Strahd, we can use the unexpected discoveries in the dreamscape investigation to build the story in the future before it has been determined and make it all fit well in the story.

Running dreams in D&D requires careful work. Many people hate both dreams and flashbacks in fiction for good reasons. Dreams and flashbacks don't actually move the story forward. Things don't happen. Things in the real world aren't moving forward. Doing something in a dream isn't really doing anything at all.

Thus, when we run D&D games in which the characters partake in a dream, make it really valuable. Make it matter. The characters have to acquire knowledge they need, and the players want, so the accomplishment is there.

In our borderland dreamscape between the world and Dal Quor, things can be real. The characters can actually acquire the three-bladed glaive carried by the drow shadow assassins. The characters can hold the scarred coin in their hand. They can learn valuable information that can discredit Leto Skalle in the eyes of the Aurum or make him the enemy of the Finder's Guild and House Tharashk.

Most of all, things matter. Every clue the characters learn has to matter. We need to continually ask ourselves "so what?" every time we build out a scene or offer a piece of information. Why will the players care? Why will it be worth their time to struggle through battles they know aren't real? What can they gain that makes it worth the effort? This is important in every scene in D&D but its particularly important in dream sequences or historical flashbacks, even if our approach is cool and edgy.

A Unique Model for Investigation

These ideas are one possible way to build an adventure around investigation. Instead of making skill checks and revealing clues, what if every piece of evidence teleported the characters to the scene and they act in the scene first hand to see what happened? What if they put together each piece of the puzzle into the full picture? What if they could talk to people now dead? What if they could stare from the bow of a ship embedded in the sands of dreams, watching as the world of yesterday literally collapses as time moves forward?

Stepping into the world of dreams gives us the freedom to tell fantastic stories outside the bounds of the realities set in our fantasy worlds. With a careful touch, such an adventure can be one remembered for a lifetime.