D&D is a game of action and high adventure yet sometimes we lose the sense of wonder and excitement when we fall into the minutia of the mechanics. We also may want a combat system that doesn't require a battle map to play. Zone-based combat helps us maintain the fast pace and bold excitement of D&D without requiring a 5-foot-per-square grid.

This implementation of grid-based combat is loosely based on the zone-based combat systems in Fate Condensed by Evil Hat Games, Forbidden Rules by Robert Schwalb, and 5e Hardcore Mode by Runehammer Games.

Here's a quick summary for using zone-based combat in D&D.

A Flexible System for Many Different Types of Gameplay

This zone-based approach for D&D combat works with all types of combat styles including elaborate 3D terrain, beautiful pre-printed battle maps, online play with or without a virtual tabletop, hand-drawn maps, a stack of 3x5 cards, a dry-erase flip map, or even pure theater of the mind play. Whatever combat system you use, whatever accessories you enjoy, this zone-based approach works well. 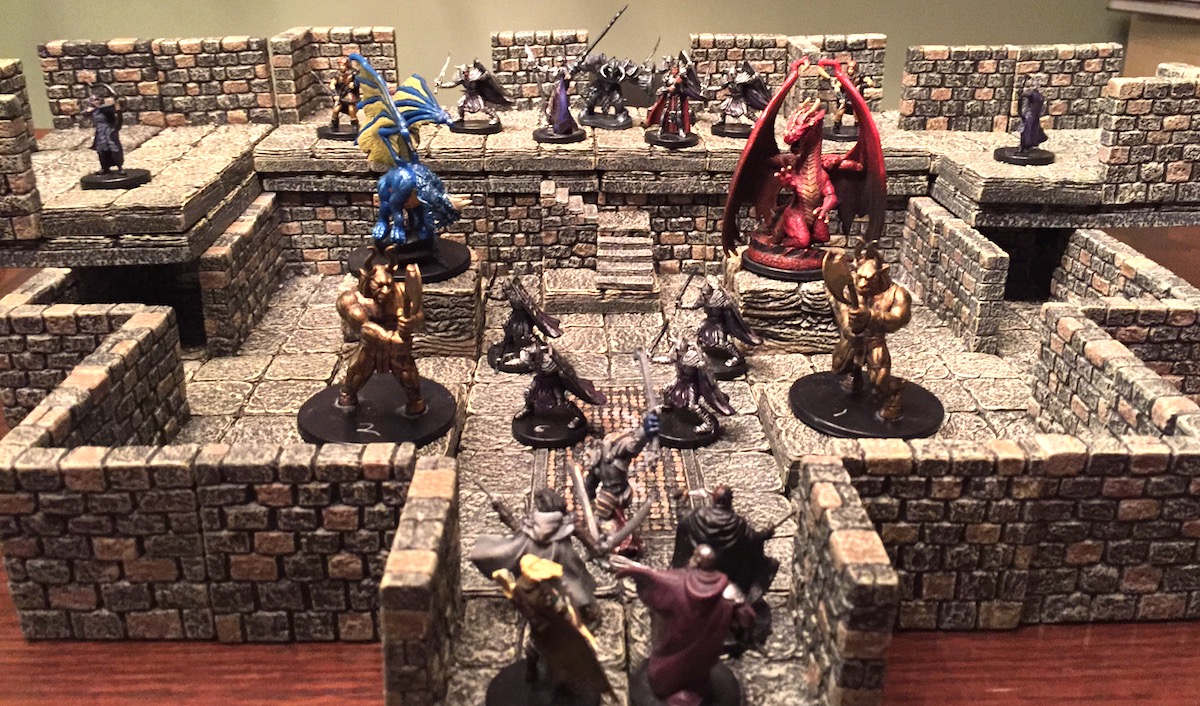 If the players need some motivation to use these effects, offer them suggestions and perhaps offer them inspiration if they're willing to take a chance at some danger. Motivate them to take risks.

Because D&D uses specific 5 foot distances, there are situations that don't fit well into a zone-based approach. The main solution is for the DM to adjudicate such situations as they come up. In general, DMs adjudicate towards what makese sense for the situation and lean in favor the characters.

Some characters move faster than others such as wood elves, monks, and rogues. When we abstract distances with zones, it takes away from the advantages of playing with these characters. What good is it if a monk gains an extra 5 feet of movement if we're not bothering to play in 5 foot squares?

First, we have to ask, how important is that extra movement really? How often would it come up when we do play on a 5 foot per square grid? For some, like the monk and rogue, it can come up often. They get whole piles of extra movement, not just 5 feet.

For those characters who get entire extra move actions, we can use a nice simple guideline:

Most characters can move within a zone or from one zone to another. Monks and rogues, however, can jump two whole zones if they want to.

As far as the extra 5 or 10 feet of movement that some characters have over another, we have to ask our players to accept that we're rounding that off in order to focus on the bigger and more heroic elements of the battle. You can also go with one of my favorites: "you would have been 10 feet short of your goal but since you're an elf, you made it!" That aways gets a narrowed-eyed harumph.

When we put a map down, fill it up with miniatures, and begin to run combat; we're bound to come to the discussion of how many targets—friends or foes—can fit in the area. Our best approach to this is to let the players know up front what they should expect from a spell's area to begin with.

The Dungeon Master's Guide outlines rules for this on page 247. We abstracted this further in our Guidelines for Theater of the Mind Combat into four categories: small areas (2), medium areas (3) large areas (4), and huge areas (8+). That's the starting guideline but circumstances can move that number up or down.

Opportunity attacks have been in the game even before the game focused on 5 foot squares. Though we may not have a specific visualization to recognize opportunity attacks, we can figure them out easily enough with some simple guidelines:

Most of all, we assume creatures move smartly to avoid opportunity attacks when they can. Don't surprise players with an opportunity attack. The players can't see the situation the same way their characters can. Describe the risks and let the player choose what to do.

On the DM side, we should feel free to have monsters provoke opportunity attacks. It's great fun for players and we always have more monsters.

What about feats like sentinel? Again, we can fall back to the players intent. Ask them what they want to do and then set up the situation so they can do it. This is a fundamental principle for running theater-of-the-mind combat along with running combat with zones.

Our overall goal when using abstract battle maps is to break away from the minutia of miniature wargaming and bring the focus back to the fast action and high adventure of our roleplaying game. Beyond being useful aids to ensure players share a common view of the battle, detailed battle maps and miniatures can be a wonderful rich part of this game we love. By abstracting distances while using physical maps, we can get the best of both worlds: detailed physical battle areas with beautiful miniatures and the high adventure we love best in D&D.