Here in the Sly Flourish labs we've primarily focused on 4th edition D&D over the years. With the release of the D&D Next playtest, our teams of scientists have branched out into not just Next but a number of additional RPGs. With this site's focus on improving D&D dungeon masters, we believe reading and trying out new RPGs is a wonderful way to strengthen GMing skills we might not otherwise get to try. 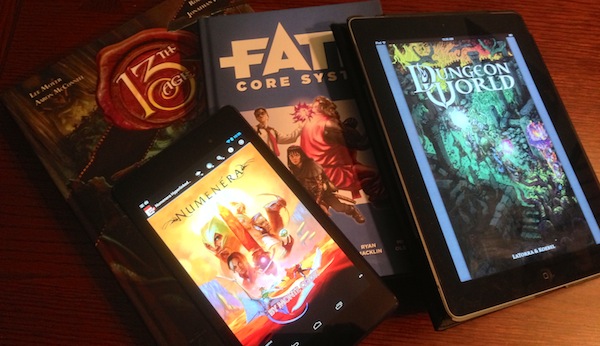 Over the past year, Kickstarter has made it possible to fund a handfull of fantastic new RPG products. Today we're going to look at four of these new crowd-funded RPG systems, all of which have much to teach us about Dungeons and Dragons on top of being excellent RPGs all on their own. These four include 13th Age, Numenera, Dungeon World, and Fate Core. All four of these systems are worth your time and attention as each brings a new fresh look at the game we love.

13th Age is the clearest successor to 4th Edition D&D. While D&D Next appears to return to the original roots of 1st, 2nd, and 3rd edition D&D, 13th Age embraces some of the key concepts that made 4e different such as healing surges (called Recoveries in 13th Age), encounter and daily powers, and a steep numerical escalation of PC power. 13th Age is the brainchild of Rob Heinsoo, one of the lead developers of 4th Edition D&D, and Jonathan Tweet, one of the lead developers of 3rd edition D&D.

13th Age has many features designed and intended to transfer over to your traditional D&D game. Examples include the escalation die, the "one unique thing", and 13th Age's approach to backgrounds. All of these are interesting features you might add into your home game.

13th Age offers a unique look at the world of D&D when compared to previous editions of D&D and the current potential future of D&D Next. With strong mechanics, some excellent roleplaying concepts, an abstract movement and distance system, and a limited but powerful level range; 13th Age has carved a unique position for itself among D&D successors.

You can read my full review of 13th Age at Critical Hits or my 4e Player's Guide to 13th Age over at Pelgrane.

After leaving his service as a freelancer on the D&D Next design team, veteran D&D designer Monte Cook began designing his own new RPG system called Numenera. Set a billion years in the future, our heroes find themselves in a completely new Earth where the remnants of nine previous advanced societies still exist to be used by a struggling society of pre-technology agrarians. The extremely distant timeline of Numenera gives room for limitless potential in technology so advanced it might as well be magic. This can give Numenera a distinct feeling that sits somewhere between Dark Sun, Gamma World, Shadowrun, and a traditional D&D game.

Numenera has unique mechanics that, while still D20 based, are more abstract from D&D than we see with games like D&D Next and 13th Age. None-the-less, Numenera offers clear character mechanics while still focusing on a more traditional RPG experience where the choices of the players often matter more to success or failure than the specific mechanics of the PC. To hear more of this philosophy, read Monte Cook's Putting the Play in Roleplay.

Numenera isn't without its blemishes. Some may dislike Numenera's handling of resources which essentially comes down to trading in hit points to perform powerful moves. The experience system can also be a bit strange. Experience points both boost your characters but can be turned in to re-roll any d20 roll as well, making them a temporary resource as well.

Rob Donohue, cofounder of Evil Hat, wrote a huge and in-depth review of Numenera that is worth your time to read and there's an excellent video describing Numenera's unique take on dice rolling.

It's also worth noting that Monte Cook has gotten together with Bruce Cordell and just completed a Kickstarter for a new game system called The Strange. The Strange uses the same mechanics of Numenea, now called the Cypher system.

Dungeon World represents the best example of what we will term an "opinionated RPG", something we will discuss later. There is clearly a "right way" to play Dungeon World, a way that focuses on building out a story from the actions and backgrounds of the PCs. You don't roll dice whenever someone asks to do something, you only roll the dice when there is a clear threat that needs to be avoided or overcome. Based on the story-focused Apocalypse World game, characters in Dungeon World have a clear set of "moves" they can perform with varying degrees success based on their 2d6 rolls. Character creation in Dungeon World is extremely streamlined and the game has a clear focus on abstract storytelling instead of tactical combat.

Dungeon World gives you a lot more than a simple story-focused game system. Sage LaTorra and Adam Koebel load up Dungeon World with some excellent DMing advice and a style of play that falls clearly in line with the concepts of the Lazy Dungeon Master. Even if you never play Dungeon World itself, the style of the writing and the advice you receive make it well worth a read.

Unlike the other three games we've discussed, Fate Core isn't a fantasy RPG. Fate Core is a RPG toolkit that lets you build characters and develop stories in any game world. Fate Core is written to support groups who want to dive right into the world of their favorite book, movie, or TV show. Though clearly story-focused, Fate Core has some excellent mechanics for increasing and decreasing a character's limited pool of "Fate Points" based on advantages or disadvantages they face in combat. Numenera contains a similar mechanic called the GM Intrusion that awards PCs for accepting complications. As part of the very successful Kickstarter for Fate Core, the designers also created Fate Accelerated Edition, a stripped down version of Fate whose core rulebook weighs in at only 45 pages.

I love Fate Core enough that, the day I got the core book in hand, I started building my own cyberpunk Fate Core game called Aeon Wave. The Kickstarter for Aeon Wave is complete, but the product will be out before the end of 2013, so you won't miss out.

Of all of the systems I've tried, I consider Fate Accelerated to be the best system for one-shot or convention games. You need little more than the cheat sheet, some character sheets, some weird dice, and some great ideas to have a fun evening with some friends.

The Power of Kickstarter

These four RPGs, along with many other successful RPG projects, show the wonderful and evolving power of crowdfunding. No longer does a company need to sell 100,000 units to break even. Now a small group of talented people can develop fantastic RPGs that focus on a specific setting or play style rather than trying to ensure every system has something for everyone. These four are just the beginning of many others. Primeval Thule by Richard Baker, Stephen Schubert, and Dave Noonan and Red Aegis by Matt and Brian James are further examples of how crowdfunding can back fantastic ideas and help them develop into very solid RPG products (full disclosure, I have agreed to freelance for both Primeval Thule and Red Aegis).

Because we now have the opportunity to see such a wide range of RPGs, we gamers are in a much better spot to choose the system we prefer. Whether our system of choice is the popular one or not is mostly irrelevant as long as we can find a group who enjoys playing in the same system we do. Since game designers now need far fewer sales to still make a profitable product, they can choose to focus their game on a particular style of gameplay for a particular style of gamer. Dungeon World is probably the best example of an opinionated game, although all of the games we've looked at expect a particular style of play.

At first glance, this style of game design appears arrogant and is likely to get people's blood up. Rather than get fired up about systems we don't agree on, it's a lot more productive to focus on the games that fit the style we enjoy the most. The more open minded we can be about the systems we try, the more we can improve our skills when running the systems we enjoy the most.

Even if you focus on Dungeons and Dragons, delving into the four games above can give you a great view of the differing perspectives and design decisions other games have chosen. Many times you will find settings, philosophies, or mechanics you can incorporate into your own Dungeons and Dragons game. Give them a look.