It wasn't until a few months ago that I learned about the little book written by Robin Laws, the prolific game designer of Toronto, Ontario, Canada, known as "Robin's Laws to Good Game Mastering". This well-known short book outlines agnostic principals for every game master to improve their game. Though difficult to find in print, the 32 page book is still available for eight bucks in PDF and is worth the cost. 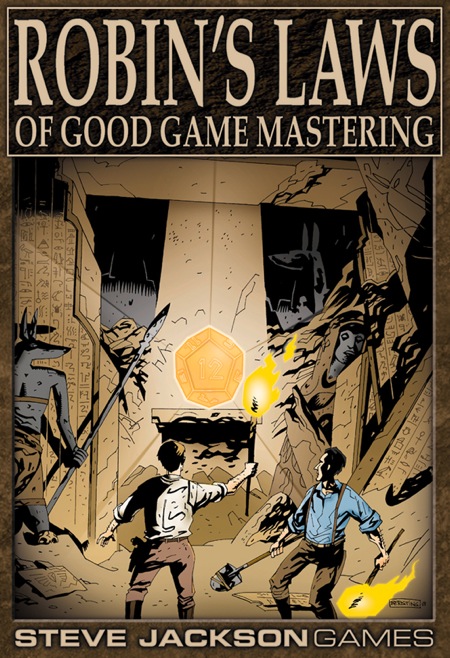 Phil Menard of Chatty DM has gone in-depth discussing how these principals might fit into our games with his Robin's Laws Revisited series. Today, I'm going to look at four specific tips I found in this book that I feel can improve our D&D 4th edition game.

Tip 1: Build and Use A Player Goal Chart

I don't know that he invented it, but Laws discusses the primary player archetypes we might often find in our games: the power gamer, the butt-kicker, the tactician, the specialist, the method actor, the storyteller, and the dreaded casual gamer. Robin doesn't downplay any of these play-styles. These are how players have fun and, if they show up at our table, it is up to us, the DM, to help build the game they want. It is one thing to know that you have a power gamer at your table and something else to actively track this player's desires, goals, and progress. Keeping an up-to-date player chart with specific, actionable plans to fulfill this player's desires can do a lot to make your game strong. Build a spreadsheet or write it out on a piece of paper. Write the player's name, archetype, goals, and specific things you can do to fulfill them on the sheet. Review this every adventure to see if there is an opportunity to touch this player's motivation.

One can argue the merits or hazards of railroad games versus sandbox games, but the best games likely fall in between. Games with clear plots and structures are good for both DMs and players but no player wants to feel like they can't affect the world. Give them set, specific decisions throughout your campaign. You can document these as you design it by building a simple decision tree that goes out two or three steps. Add these decisions in each adventure to give your players a chance to affect, sometimes radically, the course of the world. I remember in the game Wing Commander, there was a success / failure tree throughout the entire game. Fail enough missions and you must defend earth from the Kilrathi. Succeed and you take the battle to their own world. Build a tree like this in your own world and design very few of these paths to total failure.

As writers of fiction, it is the drive of all DMs to build rich, deep worlds full of the most meaningful NPCs we can think of. We build 10,000 year old histories and entire pantheons of religions. We want to share all of this with our players, dazzling them with visions of a world outside their own. Often, however, these players simply want to know only what they need. "You don't need to make an adventure complicated, the players will do that for you," says Laws. Keep things simple, with a direct plot hook and a small handful of clear NPCs (with easy to understand names beginning with different letters - an old Orson Scott Card trick). Always ask yourself how you can simplify your adventure and your campaign. Quiz your players on how much they know and reduce it when they can't get the whole thing right.

Tip 4: Use Tools to Promote Spontaneity

All the planning in the world may go out the window when the minis hit the battle mats. This is the way of D&D, the thing that makes it greater than any PC or console game we might play. In order to capitalize on this, we must have our tools ready to improvise when these times come. Keeping a few handy tools in your Twyla Tharp campaign box can do wonders when you need to build your world out on the fly. Here are a few handy tools:

Within all of the specific tips found in this wonderful 32 page book, Robin has one law above all others: build for fun. Your goal as a DM is to build entertainment. Build your game for the fun of your group (and yourself) above all other goals and you will have a great game. Lucky for us, Robin Laws is a co-author of the upcoming Dungeon Master's Guide 2, available in September 2009.