How to Protect Your Villains

Note: this article has been updated from the original published 5 April 2010.

From a storytelling angle, we GMs love our big bad evil guys (BBEGs). These villains drive the ire of our players and move the world along with their villainous quests. Villains are the masterminds behind the treachery faced by our PCs and, for that reason, they are the most sought out for the PCs' vengeance.

In good storytelling we like to see our heroes struggle to face and defeat our villains but in D&D this often plays out a different way. Villains in D&D end up as the lightning rod for the PCs' most devastating attacks, often dying in the first one or two rounds of combat as all of our players use every powerhouse move they have to bring the poor wretch down. It's not uncommon for every PC to ignore any other threat in an encounter and focus all of their attention on the villain to bring them down as fast as they can.

It is for this very reason that our villains often require a bit of extra protection, a trick or two to ensure they can stay alive longer when they finally face the PCs. Today we're going to look at some tricks our villains can use to keep themselves upright even when the full wrath of the PCs falls upon them.

A Note On Editions

Though these tips were originally written for the 4th Edition of D&D, the same tricks work perfectly well for just about any d20 fantasy RPG including Pathfinder, D&D 5th Edition, and 13th Age. With some subtle design tweaking, there are many ways to shore up our villains defenses regardless of our system of choice. Use the examples below as guides for designing your own villainous defenses. 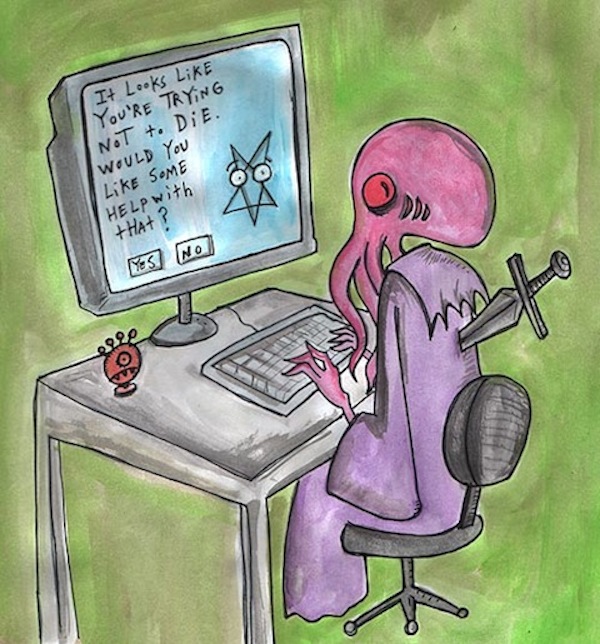 When you're designing some form of protection for your villain, there are a few things you want to keep in mind. Here are the steps for building a good villainous shield:

Here are some example shields you might use or re-flavor to suit your villain's needs.

A vampire lord lurks in his chamber plotting his villainous ascension when the PCs burst into his door. Having planned for this contingency, the vampire lord reveals two NPCs dear to the PCs whose souls protect the vampire. As long as he is channeling their life energy, he takes only half damage from attacks and is immune to any action-reducing status effect. Further, he gains one extra action per turn as long as he is able to channel these souls.

The PCs can defeat this protection in two ways. First, they can inflict a certain amount of damage to the NPCs and kill them outright. Second, they can attempt to disrupt the flow of life energy with three successful skill checks per NPC, one check per round per NPC maximum. When disrupted, the vampire loses his shield of protection.

The Circle of Protection

Having seen the devastation left in the wake of the PCs, a dark priest has created a circle of unholy protection while he performs his ritual to open a gate to the nether-realm. While within this large circle of protection, the priest's defenses are all increased and the priest is immune to all mental effects. Further, any creature who attacks the priest takes a suitable amount of unholy damage in return.

This circle can be disrupted with four consecutive religious or arcane skill checks, one per round. On each success, the defensive bonus drops until, after four successes, the circle of protection fails completely.

A powerful night hag has been harassing the PCs from the shadows and now they have discovered her dark plot and cornered her in the deserted streets of the abandoned village of Nulb. She smiles when they face her and suddenly, two copies of the hag appear behind the PCs.

Instead of a single villain, this night hag has split herself up into three. Each of them gets full actions and takes damage as an individual opponent. However, the twisted nature of these creatures means that, when hit with an area attack or multi-target attack, only one of them takes the damage from it. Otherwise, they act as three completely separate villains and are only defeated when all three are taken down.

It's easy to go overboard when designing protections for our villains. Always keep in mind what is fun and what is frustrating for our players. Protections should be like an interesting puzzle for the group, not a roadblock or filler to pad out a battle. There's a thin line here sometimes, and one you may overstep from time to time. Be prepared to think on your feet and change the rules of a shield if it turns out to be too much of a pain in the ass. Above all, our game is mean to be fun. Don't let your own frustrations with a weak villain end up turning the game into a grind fest.

The best insurance we have to help our villain stay alive is to know our players. Recognize that, the minute they see a big boss, they're going to unleash everything they have at it. Without making it a complete pain in the ass for the players, use the villain's knowledge of their strengths to shore up the villain's defenses. With the right defenses in place, our players will face an opponent far more dangerous and crafty than the typical brutes they're used to.

Knowledge is power. Give your villains both.