Monster Optimization: Anatomy of a Dracolich

In one of my recent games, our level 22 party traversed the twisted mountains of madness in northern Death's Reach. There they faced a beast of great power and ancient dark magic - the Dracolich Ashencrown. Now a level 22 party is a pretty hard party to really challenge, especially for a single solo creature without any backup. I lucked out in one regard that we only had four PCs and one companion character, but even still, I wanted to ensure that this was a dragon they would remember.

As I mentioned in my Powerhouse Dragons article, dragons are creatures to be feared and dreaded, not cut down quickly. Unfortunately, as built in the various monster manuals, they aren't always that dangerous. On top of this, the standard Dracolich's in the Monster Manual 1 are simply annoying to players. They have about four different ways to stun PCs and PCs HATE to be stunned.

So for this battle, I decided to use some tricks and modify a standard dracolich into a fun dynamic creature that would have the PCs on the edge (literally) and give them a battle to remember. Today we're going to dissect my new dracolich creation so that others can benefit from it.

To start, we began with a level 11 Stoneborn Dracolich (note, link requires a DDI subscription). Using the Monster Builder, I up-leveled this guy to level 23 - one level above the party he would fight. The monster builder upped his hitpoints, defenses, and damage properly. I like the Stoneborn because he doesn't have a lot of stunning abilities but still has a lot of nice effects.

Now the modifications began. First, I used the new DMG 2 rules for building solos. This reduced his hitpoints by about 200 and his defenses by two. I removed his vulnerability and the marking effect on his basic melee attack. Given that Ashencrown was a blue dragon once, I added the lightning keyword to his breath weapon. At epic, this helps him bypass most resistances. This annoys players but I haven't found a real good way to deal with very high resistances in epic-level PCs.

Now I started adding some fun effects. First, I added an armor-rend to Ashencrown's bite attack that stacked -2 AC penalties as he tore into the tanks. Every hit tore more armor away leaving the struck target more vulnerable.

Second, I added an aura that kicks in when Ashencrown is bloodied. This is an aura 5 of 10 lightning and necrotic damage. As soon as he is bloodied, the damage starts pouring out of him.

From my Powerhouse Dragons article, I gave him a "burst 2 within 10" version of his breath weapon. This way he could fire it at ranged attackers.

Like all my solos, Ashencrown resisted stuns and dazes. Instead of their normal effects, they removed Ashencrown's next standard or minor actions respectively.

For another bit of nastiness, Ashencrown's breath weapons actually creates four level 23 elemental mote minions. These minions attack as soon as Ashencrown's turn is over for 13 lightning and necrotic damage. They go down fast but every time he breathes, four more show up anywhere in the breath area.

Given that this battle was on a mountainous path, as a minor action, Ashencrown could stomp the ground and create an avalanche within a random 4x4 areas of the path for 3d6+8 damage from falling rocks. A better way to handle this would be three random areas every round that reveal themselves the round before they strike so the PCs can move around the battlefield to avoid the damage.

This creation of Ashencrown worked perfectly. The party was challenged, with lots of dynamic effects they had to worry about such as the falling rocks and the elemental motes from Ashencrown's breath weapon. His bloodied effect gave the PCs pause and pushed them quite a bit farther than they expected. This was my favorite quote from the game when one of the players pondered about how easy the first few rounds of combat went:

"Remember when Ashencrown was dazed and prone and knocked into the ravine? Those were good days..."

Here is a copy of the final version of the Ashencrown encounter should you wish to use him in your own campaign. This is a good encounter for five level 21 PCs. 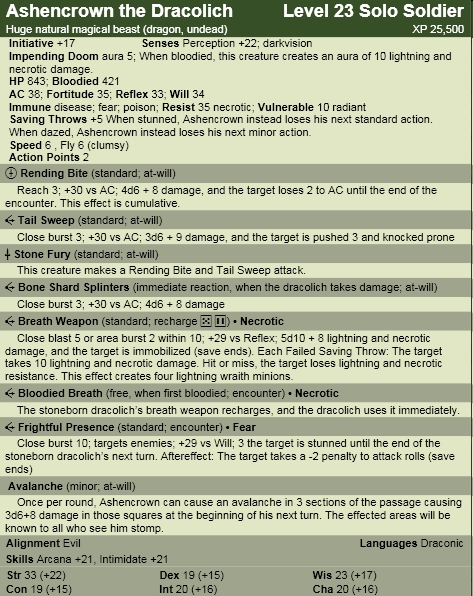 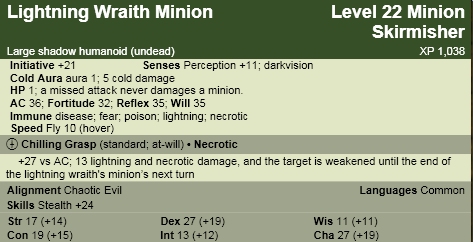 Tactics: Ashencrown begins with his breath weapon, either ranged or close burst depending on where he can hit the most PCs. He places his lightning elementals in squares where they can flank opponents. After that he will switch between Stone Fury and his breath weapon. He attempts to push PCs off the edge of the mountain where they will crash to the ground.
Terrain: This enocounter takes place on a narrow passage with a wall of mountains on one side and a 60 foot drop on the other. The passage is twenty to forty feet across (four to six squares). There should be areas where it widens and narrows. If a PC falls, it takes a double move action to climb the cliff wall back to the passage with a DC 24 athletics or acrobatics check.

Like this article? Consider using these links to purchase the Dragon and Undead related D&D booksDraconomicon 1, Draconomicon 2, Open Grave or use this link topurchase anything from Amazon.com.