Running tough high epic-tier battles is hard to do. The combination of feats, powers, and items possessed by our PCs push them well beyond their equivalent effectiveness at lower levels. Yet to keep suspense high, we have to run a tough battle once in a while. Today we're going to design the main boss of a tough encounter for a group of level 26 PCs and that boss is Orcus's right-hand, Doresain the Ghoul King. So let's start pimping him out. 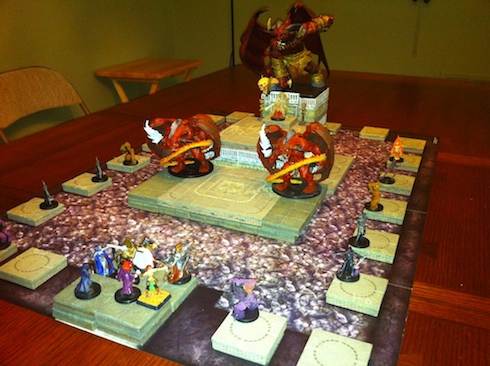 We'll start by defending our Ghoul King. Any single highly desirable target like Doresain is going to end up being a lightning rod for the PCs' most potent attacks. Even with a thousand hit points, Doresain would go down like a sack of wet noodles if we didn't give him some active defenses. We need to find a way to protect Doresain from two general effect types: action reduction and immobility.

Action reduction includes marks, dazes, stuns, dominates, and any power that prevents him from acting normally. Rather than using the Brutal Shakeoff template (which works better for brutes) or the Antihero template (which generally reduces the effectiveness of dazes and stuns but nothing else) we're going to go with a mechanic seen in the Dark Sun preview of Lalali-Puy.

Like Lalali-Puy, Doresain can curse PCs. These curses serve a number of nasty purposes including status effect protection and increased damage output. Unlike Lalali-Puy, we're going to give Doresain the ability to remove effects at the beginning of his turn instead of a free action so it can be done when Doresain is stunned or unconscious or under any other really nasty effect.

We're also going to let Doresain curse all targets as the battle begins. Given that a save can end these curses, they're not likely to stick around very long so we want to throw a lot of them out there to keep Doresain mobile.

For true mobility, Doresain can shadowwalk to avoid getting too badly pinned down. He saves this for only situations where he is truly pinned down.

For damage protection, Doresain can send a channel of psychic feedback into those who strike him. He can use this against both melee and ranged attacks, but of course he only gets it once per turn. The daze component to this can be directly converted into damage by the PC hit which gives it a nice damned-if-you-do, damned-if-you-don't choice mechanic.

We want to give Doresain a cloak-of-mouths attack so we'll make it an Aura 1 that inflicts 10 damage that increases to 20 when bloodied. This is mostly to carve into those thick high epic tanks that will be pounding on him (I'm looking at you, Matt James).

Doresain's primary attack is Mind Teeth, a nice high-damage psychic / necrotic attack that resembles a ghoul chewing on the memories of its victim and forces them to flee randomly. This will dish out a lot of damage when combined with the curses. Attacking a defender with this attack still damages other targets without triggering a mark.

Against adjacent enemies, Doresain can smack them with his Toothlust rod which pushes 4 and inflicts a large amount of ongoing damage.

So let's take a look at the final stat-block:

Any creature that begins or enters the aura takes 10 damage from the biting mouths of Doresains cloak. 20 when bloodied.

At the beginning of his turn, Doresain can choose to remove a curse from a target to also remove one status effect from himself.

At the beginning of the encounter, Doresain uses Curse on all enemies within 20.

One target within 20 is cursed (save ends). When Doresain deals damage with Mind Teeth to a target other than the cursed target, the cursed target takes an equal amount of damage and slides 3.

Brain Claws; At Will

Attack (immediate reaction): close burst 15 (triggering enemy); +34 vs Will; 2d12+14 psychic necrotic and the target is dazed. The target may remove this effect as a free action by taking 20 psychic damage.

Trigger: Doresain is bloodied Attack (immediate reaction): Close Burst 15; +32 vs Will; 4d8+27 psychic and necrotic and the target is subjected to Curse.

Now at the epic tier, environments are what set the stage for a really tough battle. For Doresain's inner sanctum, we're going to use the map from Kingdom of the Ghouls. This large area has small 2x2 platforms all round the room, a throne area in the center, and a main floor filled with a mass of ghouls. The ghouls are the primary environmental effect in this room.

Any radiant attack upon or within the ghouls will clear that area of ghouls until the end of the caster's next turn.

As a Worldbreaker mechanic, when bloodied, Doresain summons a massive writhing formation of ghouls. This ghoul mass moves four squares around the ghoul pit at the end of Doresain's turn. Anyone that begins within 3 of the ghoul mass takes 30 damage. The ghoul mass cannot be destroyed unless 100 damage is done to each of the two eyes of the statue of Orcus (see below) or until Doresain is killed.

We also have a large statue of Orcus that dominates the further half of the room. The eyes of Orcus sustain the giant ghoul manifestation that appears when Doresain is bloodied.

The skull mace burns with a fiery darkness. This mace gives the ghouls of the pit resist 20 fire which enables them to survive the Balor's auras (see Support Creatures below). If the mace is destroyed, the fire resistance disappears and all of the ghouls within the aura of the Balors. The mace takes 200 damage to destroy. Every DC 28 minor action athletics, arcana, or religious success does 50 damage.

Orcus gave Doresain a Balor as his personal guardian. This guardian will fight only as long as it makes sense. If Doresain is killed or incapicated, it will fly out of the battle and flee back to Thanatos. You, the DM, may choose when to remove the Balor as the flow of the battle moves on. Use the updated Balor stat-block from the D&D compendium or monster builder that increases the Balor's melee damage significantly. If you have six PCs instead of five, add another Balor to keep the battle strong.

Doresain's sanctum is also protected by eight Lich Vestiges. These vestiges inflict 21 fire / necrotic damage per ranged attack. (See the Vestige in the Monster Manual for more detail). If you have six players in your game, add four more Vestiges.

This is a huge encounter designed to really push a group of level 26 PCs to the limits. It might push a little too hard, though, so we built in some safety mechanics. First, we can cut back on the extra damage inflicted by Doresain's cloak and mace when he becomes bloodied, keeping it at 10 damage. Second, we can lower the damage of the ghoul mass to 20. Third, we have the option to have the Balor flee.

If things look really bad for the party, Doresain might step away and escape to Orcus's home plane of Thanatos as he lets his Balor finish the job. This would give the PCs an opportunity for revenge later. 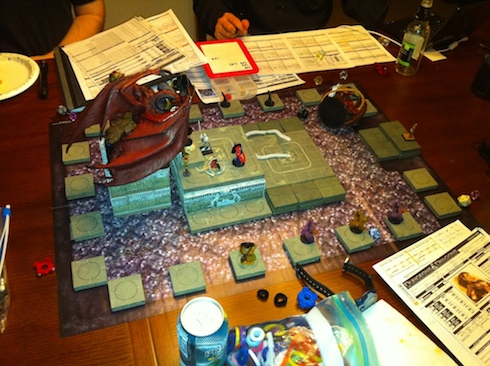 How did it play out?

After running this battle a couple of nights before writing this, I found a few interesting things. First, I kept forgetting to slide PCs when Doresain hit them with Mind Teeth. I need to read my own stat blocks more carefully at the table. Second, the PCs indeed saved against the curses. For our game, we had only five players. Our sixth, a cleric, was away. If the cleric had been there, however, I would have had to change a lot to keep the threat of the battle high. Clerics have a variety of powerful stun, immobilize, and push effects against demons and undead, and this battle is all demon and undead.

I also forgot to use the Brian Claw trigger when Doresain was hit. I used it once or twice but I should have been using it once a round. Again, I just need to be more careful and spend enough time to run it right. That's a failing for me at the table, I tend to rush things and run monsters much less effectively as I could.

Auras turned out to do most of the damage. It wasn't uncommon for someone to take 10 damage from the ghouls and 20 from the balor and ongoing 15. Later on one of the PCs took 50 damage between the balor and the ghoul mass at the beginning of their turn. The auras don't require a hit and work whether a creature is stunned or not. If you want a really effective and simple mechanic to boost your solo, give them a good aura.

In the end, one PC died (he had no surges going into the fight) and two PCs dropped to 0. They killed Doresain (who was eaten by his own ghouls during his death throes) and moved on to their final target - the Prince of Undeath himself!

This is an example of a double-length encounter that's really designed to put the screws on a high level party. This type of encounter is way too much for any group of heroes below the Epic tier but it has many examples of the sorts of things you might consider for a boss fight. Above all, build in flexibility so you can change the danger of this battle on the fly and ensure a high challenge without cutting into the fun of your group. And again, don't be like me - read your stat cards and know how your boss is meant to be played.