For updated guidelines to more easily determine the deadliness of a combat encounter, please see the Lazy Encounter Benchmark: A Simple Measure for D&D Encounter Deadliness.

Note: This article is reposted with permission from the original article posted to D&D Beyond on March 2018. It is the sixth in a six-part series of articles focused on helping new D&D DMs put together and run great games. The full list of articles includes:

In this article we're going to dig deep into one of the most challenging aspects of running a D&D game: building combat encounters.

This article goes hand-in-hand with my original article on Building Encounters in Fifth Edition Dungeons & Dragons. That article contains charts and tables to help you choose the right number of monsters for a given situation.

For an even simpler approach to determine deadly encounters, see The Lazy Encounter Benchmark, a Simple Benchmark for D&D Encounter Deadliness.

Here's a quick summary of this article's approach towards encounter building:

We're going to dig into all of these things throughout the article.

Develop Encounters from the Story

Dungeons & Dragons breaks down scenes into three different types of gameplay: NPC interaction and roleplaying, exploration, and combat. In the vernacular of D&D, all of these types of scenes are considered "encounters".

We don't have to define any scene as being a roleplay scene, an exploration scene, or a combat scene ahead of time. Instead, we can set up the situation and let the players choose how to approach it. Maybe they attack the bugbear leader of the goblins directly. Maybe they try to bargain with them. Maybe they sneak up the garbage chute and try to listen in to the bugbear's plans. We don't necessarily know what choices the players will make when they leap into an encounter and not knowing is half the fun.

It's common to break up our game into a set number of roleplay encounters, exploration encounters, and combat encounters but consider setting those categories aside and simply developing situations. These situations have interesting things going on in them that the characters can get involved with, but we don't have to know how they will interact with it. Sure, some scenes lean one way or another. When a horde of goblins attacks a wagon filled with friendly farming families (FFFs), the player characters are not going to go investigate rocks. Many times, however, we DMs can simply set the stage and let the players act within the scene as they want. That's a big part of the fun of D&D.

Choose Monsters that Fit the Situation

Most DMs want to have a vague idea of how difficult an encounter will be. A group of level 17 characters won't have much of a problem blowing this war camp off the face of Faerun but a group of level 4 characters running up against an entire war party at once could be deadly.

Before an encounter turns to combat, it helps if we know it's rough potential difficulty. Doing so helps us steer the situation and offer other options to the players before it becomes a surprise total-party-kill (TPKs). Understanding encounter difficulty is tricky and can cause real problems for new DMs. Most commonly, a new DM will pit the characters against monsters that are way too hard and inadvertently kill the characters.

Accidental TPKs are much more likely to happen at level 1 than any other level in D&D. Anyone who thinks a battle between a group of level 18 characters against Tiamat will be rough hasn't seen what happens when level 1 characters fight too many rat swarms.

The Dungeon Master's Guide has detailed instructions for building encounters at various difficulties. These are the guidelines that Wizards of the Coast themselves use to design monsters and balance combat encounters. I suggest that you ignore these guidelines. They're too complicated, take a lot of time, and don't usually give us the results we're after anyway.

In a wonderful episode of Dragon Talk, lead D&D Designer and rules sage Jeremy Crawford goes into detail on these rules and explains that the main goal isn't to "balance" encounters but to help DMs gauge the difficulty of a combat encounter, particularly if it's deadly. The math in the Dungeon Master's Guide can give us this rough gauge but so can a number of other easier methods. I'm going to offer three different methods for determining whether an encounter is deadly or not and you are free to choose the method you like the best. Two of these methods use the same underlying math of the Dungeon Master's Guide but are easier to use.

First, Xanathar's Guide to Everything includes a much-improved set of guidelines and tables for determining encounter difficulty. Instead of attempting to calculate encounter balance based on experience budgets, difficulty, and the number of monsters, Xanathar's Guide includes charts we can reference to determine the equivalent number of monsters to characters at a given character level and monster challenge rating.

Second, I'll offer some rules-of-thumb you can keep in your head to give you a rough idea of whether an encounter is deadly or not. This takes a little work to memorize but once it's wired into your head, you'll need no other tool or chart to gauge an encounter's difficulty. This method compares the challenge rating of monsters to the levels of characters.

Third, you can just wing it. The more experienced you get with D&D the monsters, the mechanics, and the capabilities of the characters; the easier it will be for you to judge the difficulty of an encounter on your own. There is, of course, a lot of variance during a fight, but as you run games you'll become better at judging the difficulty without any sort of forumlas or tables. Many experienced DMs ignore any sort of encounter balance rules and take an estimated guess at the difficulty of any given encounter.

If we reverse-engineer the encounter building math used in the Dungeon Master's Guide, we can figure out a few other relationships between challenge rating and character level. These comparisons assume a fight that is not quite deadly, but close.

A single monster is roughly equal in power to two characters if its challenge rating is 1/2 of the character's level. This increases to 3/4 if the character is above level 4.

Here's a small table that might help. This comes from the Lazy DM's Workbook, the companion to Return of the Lazy Dungeon Master. 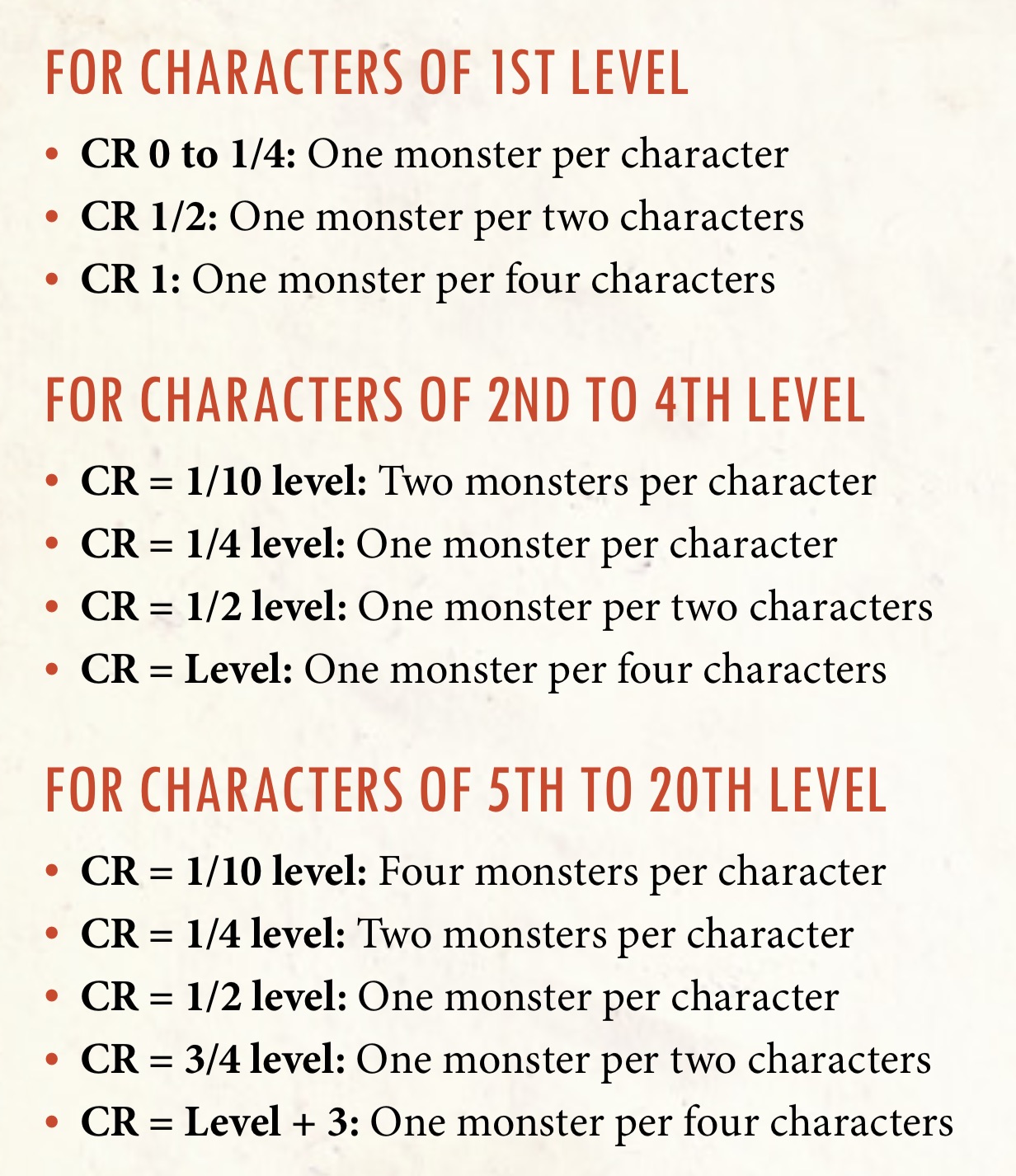 Any encounters above these amounts, in the quantity of monsters and the challenge ratings of monsters compared to the level of the characters, will be potentially deadly.

Thus, any guidelines you decide to use to help you understand encounter difficulty won't be perfectly accurate. Instead, you'll have to judge for yourself by seeing how the characters fair against various types of fights throughout an adventure or a campaign. Sometimes you'll need to ease back and make battles easier. Other times you'll need to increase the number of monsters to challenge the characters.

The more experience you get under your belt running combat in D&D and the better you understand the capabilities of the characters, the easier it becomes to see what the characters can handle and adjust accordingly.

Adjusting Encounter Difficulty on the Fly

There's a dirty secret among DMs. We're all cheats and liars. We do, however, cheat and lie for the fun of the game and the enjoyment of the players. We can, for example, vary the hit points of a monster depending on how the battle is going. If the battle is becoming a slog or is simply too hard, we can reduce the number of hit points a monster has. If the characters are carving through monsters too easily, we might increase them to add to the challenge. As long as we're varying hit points within the hit dice range of a monster, we're technically not cheating.

For example, an ogre has an average of 59 hit points and its hit dice are 7d10 + 21. Thus, any ogre could have between 28 and 91 hit points. A bigger brute might have 90 hit points but the weaker ones might only have 40. We don't have to make these changes ahead of time. We can change their hit points during the battle to keep up the high energy pace of the game.

We can likewise tweak the damage of a monster. Like hit points, we're given an average amount of damage and a damage equation. If we want, we can increase the damage the monster inflicts up to the maximum of that dice range and still be within the rules. Likewise, a hit might be less if we find that the monsters are inflicting way more damage than we expected.

Finally, we can add or remove monsters to tune a fight. Maybe six more hobgoblins rush in when they hear their fellow soldiers being attacked. Maybe two of the hobgoblins flee to get help or become distracted by a third party.

All three of these techniques give us dials we can turn to change the difficulty of a fight while it's happening. We don't want to do this sort of thing all the time, but the options are there if things aren't going well and the game's fun factor is dropping.

Six hobgoblins in an open field isn't that interesting. Four hobgoblins and their four worg mounts camping out around an ancient dwarven archway is more interesting, particularly if that archway is swirling with eldritch energy.

When we're developing the scenes in our adventure, we can add texture by throwing in interesting terrain or fantastic features. Chapter 5 of the Dungeon Master's Guide includes two tables of monuments and weird locales we can use as inspiration for some fantastic features to include in our combat encounters. Appendix A of the Dungeon Master's Guide also includes similar tables for dungeon features. Describing them can give our players ideas about how to use these features in combat which makes the whole battle more dynamic and exciting.

Features like this add an element of exploration and mystery to our scenes.

Building great encounters is a skill, like improvisation, that gets better the more we do it. It's a skill we can improve on for the rest of our lives. By keeping some general guidelines in mind and experimenting from scene to scene, we can learn what works well, what does not, and what things we want to try out in the future.