Out of the Abyss Chapter 7: Escape from the Underdark

This article is one of several articles on Out of the Abyss. You can read all of these articles at the following links:

Like previous articles, this article will contain deadly spoiling secrets that might kill you with a single word. Be warned!

Not By the Book!

Unlike previous articles, this article doesn't follow the adventure at all. Instead, we're going to use this chapter to tie off loose ends that the PCs have seen or caused throughout the previous chapters. We're also going to use this moment to come up with a big bang of a conclusion in case we're only running the first half of this adventure.

In short, don't expect this article to follow what's in the adventure itself. Instead, use it as one example of what we might do with that chapter to tailor it for the group for whom we're running Out of the Abyss.

As this chapter begins, our fearless heroes are heading towards Gauntlgrym. If you used the ideas in our previous article on Blingdenstone, the deep gnomes gave our party a map and a key to a long-buried chamber containing a gateway to Gauntlgrym that will save them months of travel through the underdark.

Before our heroes reach this gate, however, we can tie off the first loose end. Depending on what happened to the PCs throughout the rest of this adventure, this loose end could take many forms. Maybe it's a murder squad of Duergar from Gracklstugh bent on revenge. Maybe it's a fungal lord seeking to recover Stool from the PCs as part of Zuggtmoy's wedding. In our game it was Themberchaud the red dragon who managed to escape from Gracklstugh before the Duergar could assassinate him.

Whatever group it happens to be, we can build a fun encounter by having the PCs meet up with this vengeful group at one of the random environments from chapter 2. This keeps things interesting for both us and our players since none of us know exactly where this encounter is going to take place or how it is going to play out.

This encounter is just the warm up round, however. It's designed to help us tie off any outlying thread before we get into the main event and the big surprise. 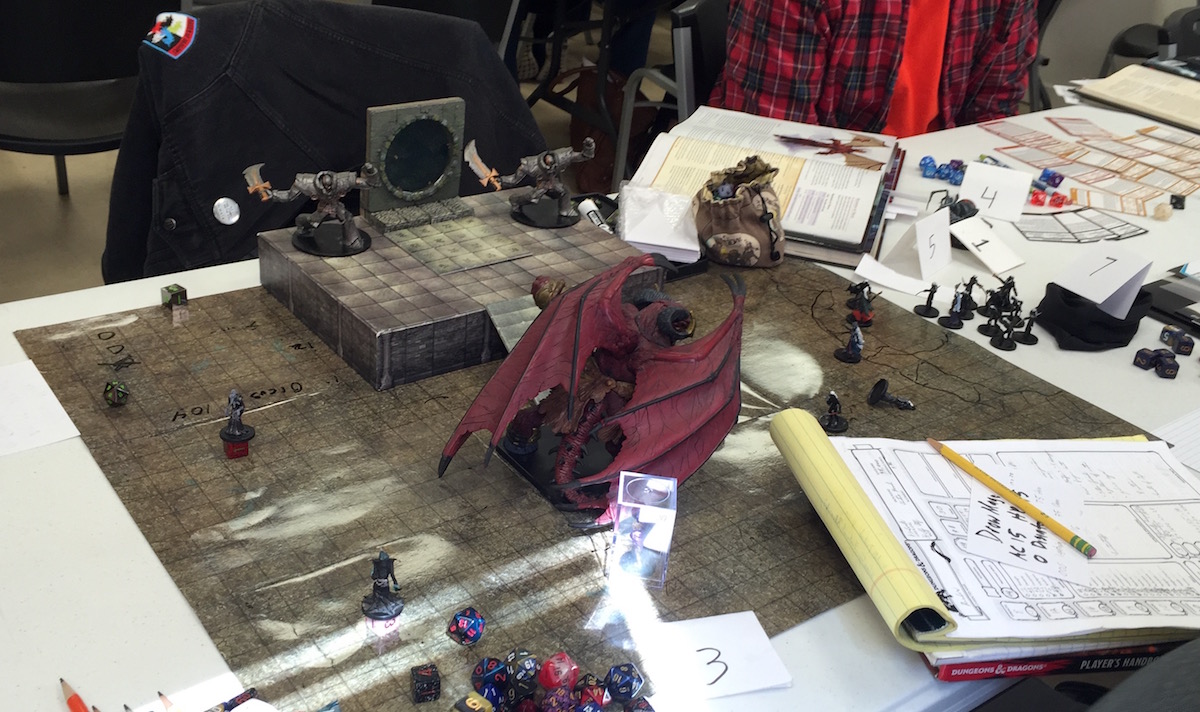 The Chambers of the Gate

Following the map given to them by the deep gnomes, our heroes come to an invisible doorway in the rock that opens with the aid of the key given to them by the deep gnomes of Blingdenstone. When they do so, they immediately feel that some sort of magical ward has been broken. If they investigate thoroughly, they will come to realize that old scrying protections on these lost chambers has now been broken. Outside magical eyes can see this gate.

When our adventurers enter these chambers, they find an ancient gateway built by the Delzoun dwarves thousands of years ago. It hasn't been touched for centuries since the dwarves and gnomes of Blingdenstone sealed it off both physically and magically from prying eyes.

Mosaics and carvings on the wall depict mighty battles of dwarves against drow, goblins, and orcs. Among the dust of the halls, the PCs can find the bones of dwarves who seemed to battle dwarven thralls of mind flayers. We can reveal all of this in the form of tweet-sized secrets that the PCs uncover as they investigate. This is also a foreshadow of things to come.

The Conclusion of House Mizzrym.

With the scrying magics gone, now it is possible that House Mizzrym can teleport in their hunting party or finally catch up with the adventurers in the chamber of the gate to Gauntlgrym.

The Set-Piece Battle: The Gate of Gauntlgrym

Since this scene will be the the final big conclusion of the adventure, it warrants setting up a nice set-piece battle. You might build a portal prop and use some other 3d terrain to build a fun tiered chamber with lots of interesting places to go and things to do.

This set-piece represents the ancient gateway to Gauntlgrym. The Delzoun dwarves, in our little fork of the world here, built a gateway near Blingdenstone thousands of years ago to give them quicker access to the eastern chambers of the underdark. When the mind flayers sought to use it, the Delzoun dwarves sealed off the gate. Now the gate lies dormant but our adventurers have the key to open it.

Meanwhile, our party gets a nice solid fight against their hunters, the drow of House Mizzrym. We shouldn't get too gonzo with this fight. This is our players' chance to really enjoy the growth and power of their characters. Put some drow elite guards, drow priestesses, a drow mage maybe, and a big pile of regular drow soldiers so PCs with area effect spells can blow down big swaths of drow jerks. It should be a tough fight but doable. If the PCs find ways to totally screw over these drow, let them do so. Let them use all of the save or suck effects they want. This is their fun revenge for their imprisonment so many months ago.

When they defeat House Mizzrym, it's time for the second wave. Again, in our game, this was House Barrison Del'Armgo. These drow didn't care about House Mizzrym losing to the adventurers but Barrison Del'Armgo would be damned to let the PCs simply walk away. This force is significantly more powerful including multiple elite guards, mages, and priestesses. 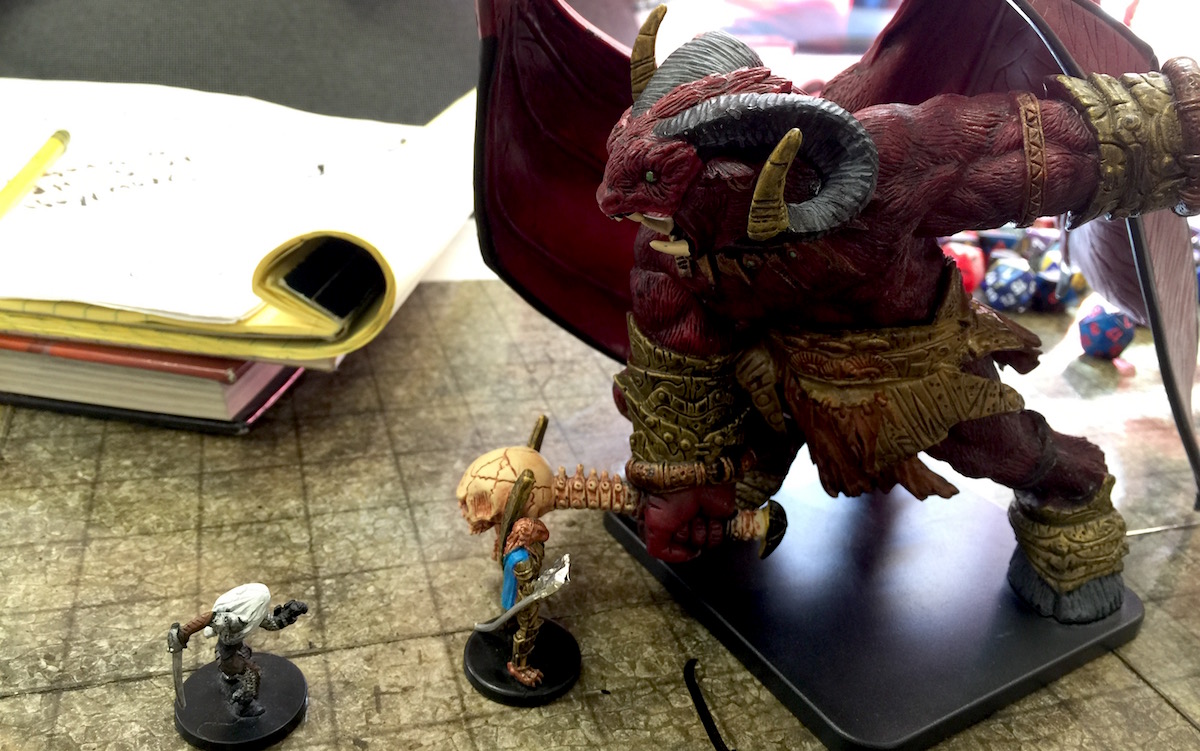 Wave 2: The Coming of Orcus

But then something terrible happens. A pair of gateways opens up, this time psionic gates, and in float two mind flayer arcanists. They begin to open up an even bigger gate, much bigger, and out steps the very demon prince of undeath himself—Orcus.

This is our change to remind the players about the true chaos that's taken hold of the Underdark. The Prince of Undeath, you see, also wants to open the gate to Gauntlgrym and he doesn't care who stands in his way.

At this point, in our game, I handed over reduced stat blocks for each of the drow to each of the players. They had the chance to roleplay these drow however they wanted. The chaos of seeing Orcus show up is enough to shake anyone's resolve or past alliances.

It's also time for a madness check. A DC 16 charisma check sounds about right to stave off the madness of seeing Orcus directly. Those who fail roll on the madness chart in the Dungeon Master's Guide. This includes the drow. This madness lasts for 1d10 minutes with a couple of caveats. Mad characters may make another saving throw at the end of their turn, if another creature spends its action to shake them out of it, or if they take damage. This makes madness not quite so horrible.

As for Orcus, we're playing with his actual stat blocks found at the end of the adventure. He's not too worried about the situation so he doesn't just go crazy but he isn't afraid to use power word kill from his wand. He'll probably start with the drow but eventually you might start rolling randomly against all opponents to see who he hits. The key here is to spread his attacks across all of the opponents, not just the PCs.

There are a few potential ways the PCs might deal with this. They might realize that the key to Orcus's arrival are the two mind flayers. If the mind flayers are killed, Orcus goes away. They might also just choose to wait it out until, three rounds from Orcus's arrival, the gate to Gauntlgrym opens and the PCs can escape with the gate slamming shut behind them.

This probably goes without saying but you'll want to be careful how you run this fight. A total-party kill in the final battle isn't much fun but they also shouldn't feel like they're fighting a much weaker version of Orcus. If they DO die, and you're not a complete bastard, you might have them awaken in Gauntlgrym itself, being saved by one or more of their NPC allies who were left behind to steer Orcus away from the gate before it closed for good. There are lots of potential options here.

However they get out of the situation, the PCs end up in the dwarven city of Gauntlgrym and the city's new king, King Bruenor Battlehammer. He will have heard of the battle against Orcus from those dwarves guarding the gate's other side but might dismiss it as clear madness. He does know, however, that the darkness of the abyss has opened up in the underdark and, as those with the most experience, asks the PCs to step in once again into the belly of the beast to find the source of this corruption and close it for good. The choice lies with them, of course. Retire happily back to the surface or dive down deep into the abyss once again!

Your Results Will Vary

Of course, this is just one way to end Out of the Abyss at the mid-point of the adventure. Given how many different paths each group of players might have followed throughout the adventure, its important to tailor this final piece around the choices they made, the things they enjoyed, and the loose ends they want to tie up. Build it out however makes sense for you. You might decide the whole thing with Orcus is just all too much and leave it to a nice big battle against the drow of House Mizzrym, and that's totally fine. The most important thing is that you and your players enjoy the conclusion of the campaign.

That takes us to the end of our play-through of Out of the Abyss. Time to take a step into another darkness and face the Curse of Strahd!