Since the release of the 5th Edition of Dungeons & Dragons I have had the opportunity to run a full campaign spanning levels 1 to 20. During this campaign, we ran through the two Tyranny of Dragons adventures, Hoard of the Dragon Queen and Rise of Tiamat and extended beyond the Sword Coast into the depths of the Nine Hells where our heroes cut down tremendous foes, including a few from Kobold Press's upcoming Tome of Beasts. Finally, at level 20, our heroes faced the fully powered goddess of dragons herself, Tiamat. 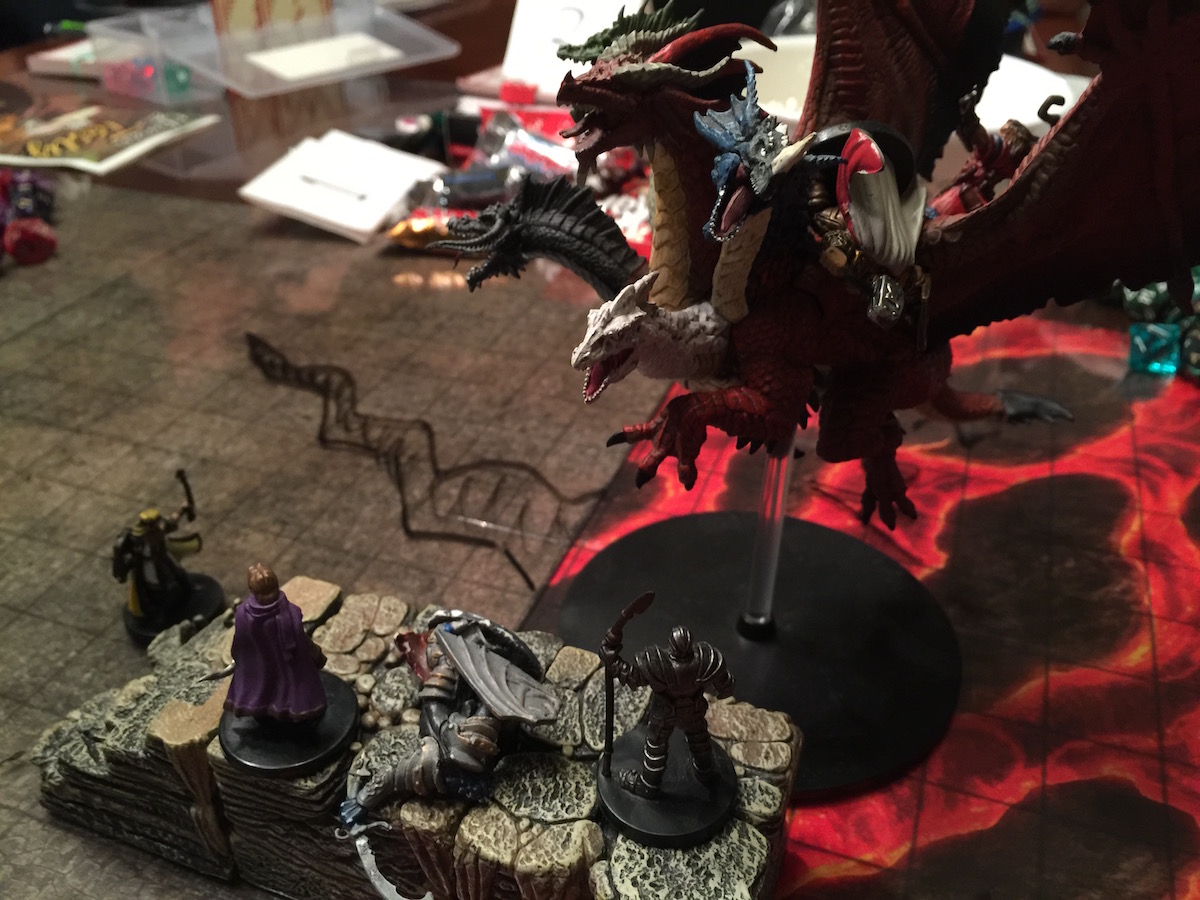 This experience gave us a wide-ranging view of D&D 5e, a better view than we had when 5e was first released. Before we had assumptions. Now we have experience. Throughout the rest of this article we'll discuss our observations running the 5th edition of Dungeons & Dragons from level 1 to level 20. Let's dive in.

Recapturing the Feeling of Dungeons and Dragons

A lot has been said about 5e's return to "traditional" D&D. After playing D&D 5e from level 1 to 20, this feeling stayed with us. From the beginning to the end, 5e just plain feels like D&D. These days we have lots of options for our roleplaying games such as Pathfinder, 13th Age, Fate Core, and Numenera. All of these games are great but when it comes to capturing the essence of original D&D, 5e does so from the beginning to the end.

Even after a full year running the game from 1 to 20, it's a joy to pull out the Player's Handbook, the Dungeon Master's Guide, and the Monster Manual and just get down to playing Dungeons and Dragons.

The Death of Superman

From the point of view of the players at our table, the one major observation they had is that, even at high levels, D&D 5e PCs don't feel as powerful as those in the 4th edition of D&D or 13th Age. A lot of this is due to the oft discussed flat math of D&D but a more streamlined set of options and more refined magic item progression feeds into this as well.

In D&D 5e, PCs are no longer superheros, they're back to being adventurers. Some players won't like this transition.

D&D 5e is not a uniform game. It isn't perfectly balanced. In D&D 5e's design, the designers made it clear that uniformity wasn't what they were after. fireball, they explained, is simply more powerful than a lot of other spells at the same level. It's meant to be imbalanced because imbalance can be wicked fun. There are lots of these imbalances in 5e and it can drive a lot of DMs crazy. Some spells, abilities, and monsters are simply more powerful than others at any given level or challenge rating.

We could complain about this or we can accept that these imbalances give the game some unpredictable character. We don't really know how every battle is going to play out because it might turn out that the monsters we choose punch way over their weight class or a PC is going to nuke the battle with a well-placed circle of death spell.

There are a lot of examples of these power spikes and sharp edges. A banish cast against a pair of pit fiends does the equivalent of 300 damage with a single failed save. The banshee, a CR 4 monster, can be a serious challenge for high level PCs because the banshee's wail takes away ANY amount of hit points if the target fails the saving throw. The vampire and beholder are both CR 11 creatures but vary greatly in their actual difficulty. A beholder's disintegrate ray does 45 damage on a hit while the vampire does about 8 with a slam attack. Force wall and force cage can trap just about any melee creature in the game small enough to fit in it with no saving throw and no real way to get around it. These examples can go on and on.

And you know what? These sharp edges are ok. This is D&D and imbalances like these have been a part of D&D for four decades.

The choice of acceptance falls to us. Are we ok with the sharp edges or not? If we're not, we have plenty of other systems. If we ARE ok with them, we can accept them, even embrace them, and enjoy our game.

Sometimes these imbalances lead to some awesome stories. Here's an example.

At about 14th level, the heroes of the Sword Coast crawled through the Doom Vaults of the Red Wizards of Thay. There, in a room with a strange pool, they found themselves face to face with an abolith. Our crafty warlock dropped a force cage on the abolith and the rest of the party began discussing how best to kill it with ranged attacks.

Then the abolith started talking to them. It described its plight as a prisoner of the Red Wizards. It described the Abolithic Sovereignty's own struggle against Tiamat. It described the power it could give to the party if only they would allow themselves to become part of the Sovereignty. It knew things about Tiamat and her cult that no one else in the multiverse knew. All they had to do was join with the Sovereignty and these secrets would be theirs. Two of the characters agreed and up the nose the tentacles went!

The abolith wasn't lying to them. The characters got a lot of advantages being part of the Sovereignty, including a dragon-slaying great axe. The Sovereignty got a lot out of it as well. And that's how an abolith in a force cage wins the fight—with some careful conversation. 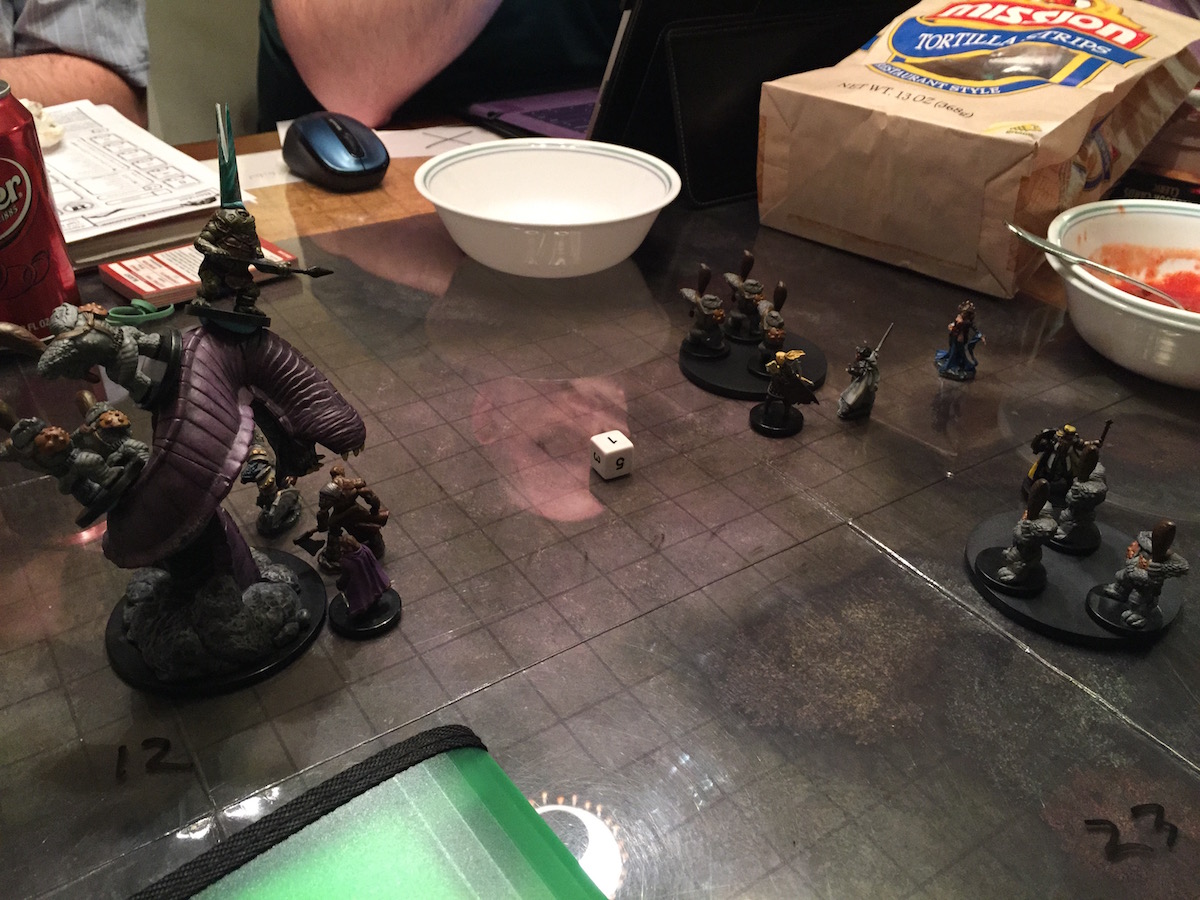 Of all the niggly bits of 5e, poor encounter building rules gave me the biggest problem across levels 1 to 20. Encounter building rules in 5e are too complicated and don't work even when you bother to go through the trouble. As we discussed monsters at the same challenge rating will vary widely in their actual threat. Consider the numerous discussions of total party kills due to the rat swarms in the beginning Hoard of the Dragon Queen.

As PCs raise higher in levels, battles become much easier than the encounter building rules would lead you to believe. In particular, adding a PC or two to the group above four greatly increases the power of the group. The rules attempt to account for this but not very effectively.

Beyond not being a very good gauge of difficulty, the default encounter building rules are also very cumbersome.

These complicated encounter building rules are a fixable problem and we lazy dungeon masters have a couple of tools we can use to make our lives easier. First, we can use the Kobold Fight Club to balance our encounters with glorious computational calculations. Second, we can come up with a simpler system for calculating encounters that mimics the systems of 4th edition and 13th Age by matching the amount and power of monsters to the individual power of each PC in a battle.

Like every previous edition of D&D or its variants, encounter building becomes a lot harder as characters get higher in level. Because some battles are completely circumvented with spells like force cage or banishment, you don't really know how hard or easy a battle is going to be. If you build encounters conservatively, you're likely to watch the PCs stomp over them. If you throw in the kitchen sink, things could get really hard on the PCs really fast.

This is a perfect problem for Wizards of the Coast to fix with a set of optional encounter building rules in an Unearthed Arcana article. 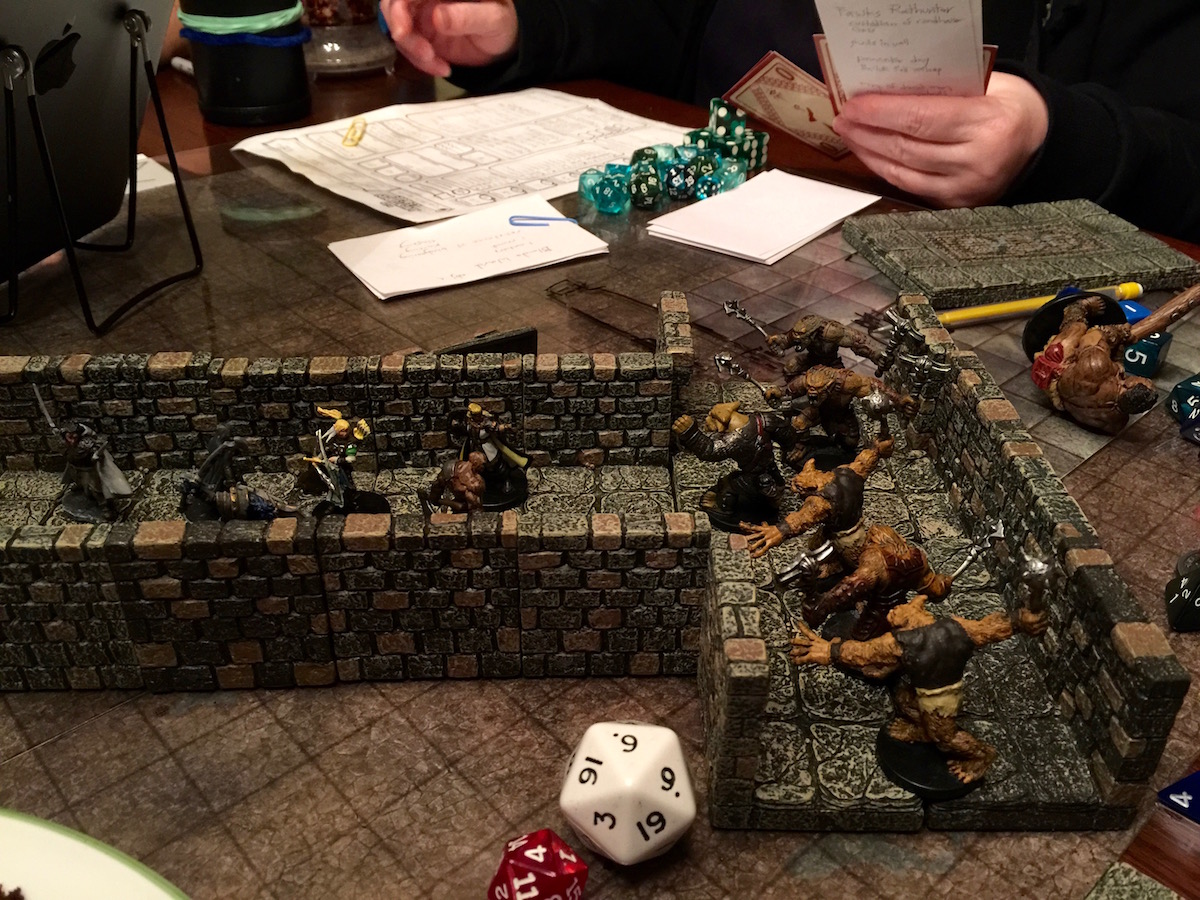 Beyond better encounter building rules, I really wish 5e included better rules for running abstract narrative "theater of the mind" style combat. I used narrative combat a lot during our 1 to 20 sessions and it was never perfectly clean.

I don't find measuring 5 foot distances to be particularly exciting in a game of fireballs and demon princes. Because 5e retains its traditional Dungeons & Dragons roots, its certainly acceptable that the game doesn't throw out the use of specific distances and makes them the default.

Yet I would love to see Wizards of the Coast release a set of optional rules for running "theater of the mind" style combat. As written, it feels like cheating when we ignore five-foot squares and every casting of thunder wave results in a scientific debate about the Pythagorean theorem if there isn't a set of miniatures on a grid.

Page 249 of the Dungeon Master's Guide helps us adjudicate area of effect spells but it doesn't go far enough to make it easy for players and DMs to run full theater-of-the-mind combat.

This would make another perfect Unearthed Arcana article. We can, of course, use Sly Flourish's Guide to Narrative Combat to help us in the mean time. 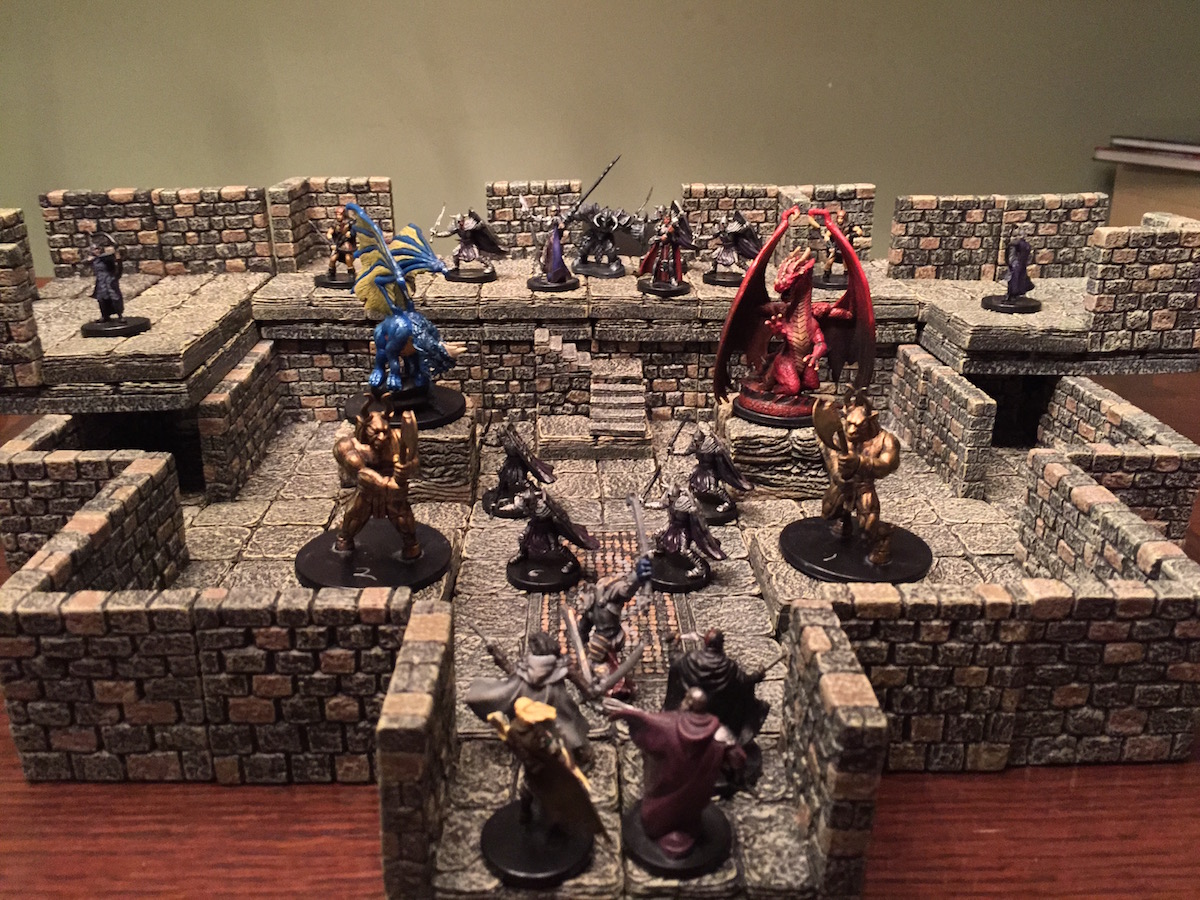 As we close in on the end of this article, here's a few quick summaries of our experiences running a full-range 5e D&D campaign. 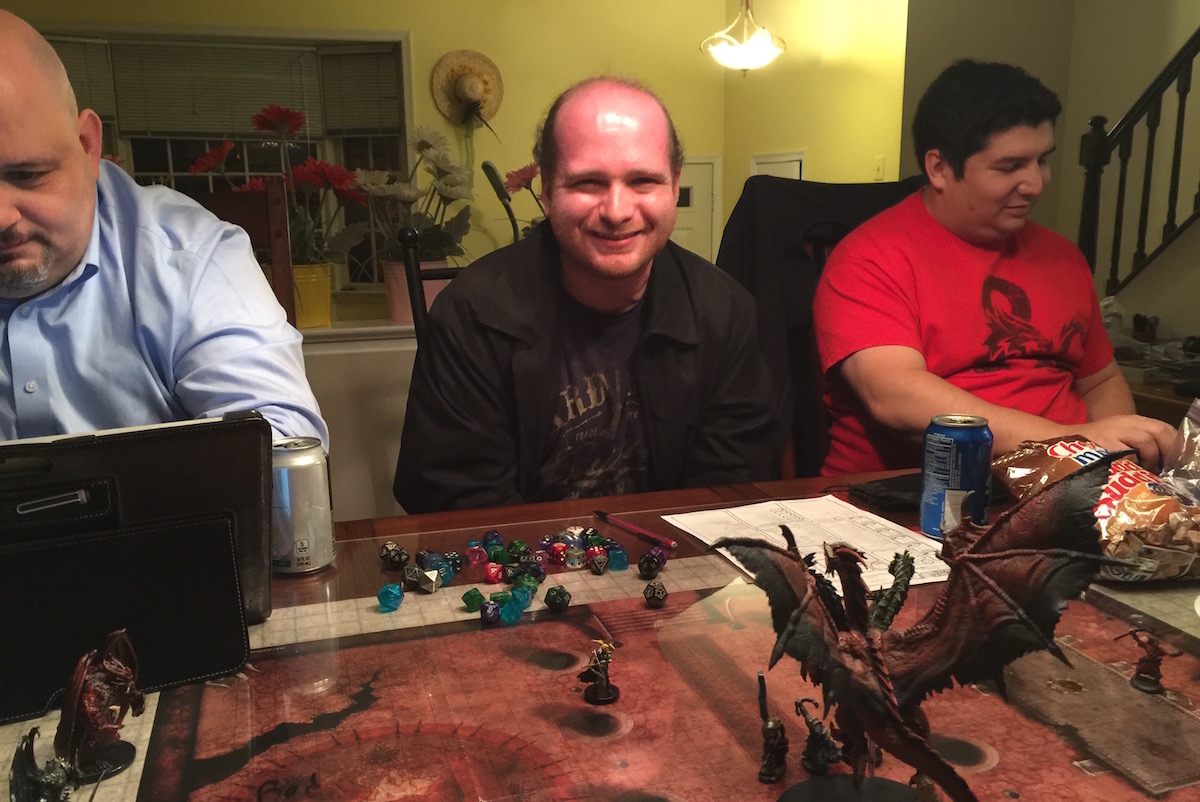 This is the look you have on your face when you critically hit Tiamat with a vorpal sword. How many times do you get to do that in your life?

When it comes down to it, the real value of a roleplaying game is its ability to bring together a group of friends, share a fantastic story, and have a lot of fun. From the first level to the last, D&D 5e brought us a wonderful campaign, a mountain of laughs, and a great story to share and remember. We had an epic campaign of deep personal stories, epic battles, and unique moments we will remember for the rest of our lives. After running D&D 5e for all 20 levels, I can safely say that, warts and all, I love this game. I can't wait to play it again.