Nearly all of the D&D games I've run over the years have been at a table with live players, dice, books, and pencils. As we know, however, finding and keeping a good group of players for live home games is extremely difficult. Like in nearly every other aspect of our lives, the internet has made things easier for us to find players online and even play our D&D games with players from all over the world.

The friends of Sly Flourish over at Roll20 have one such system, a free web-based online gaming table to bring DMs and players together to play D&D wherever they are in the world. 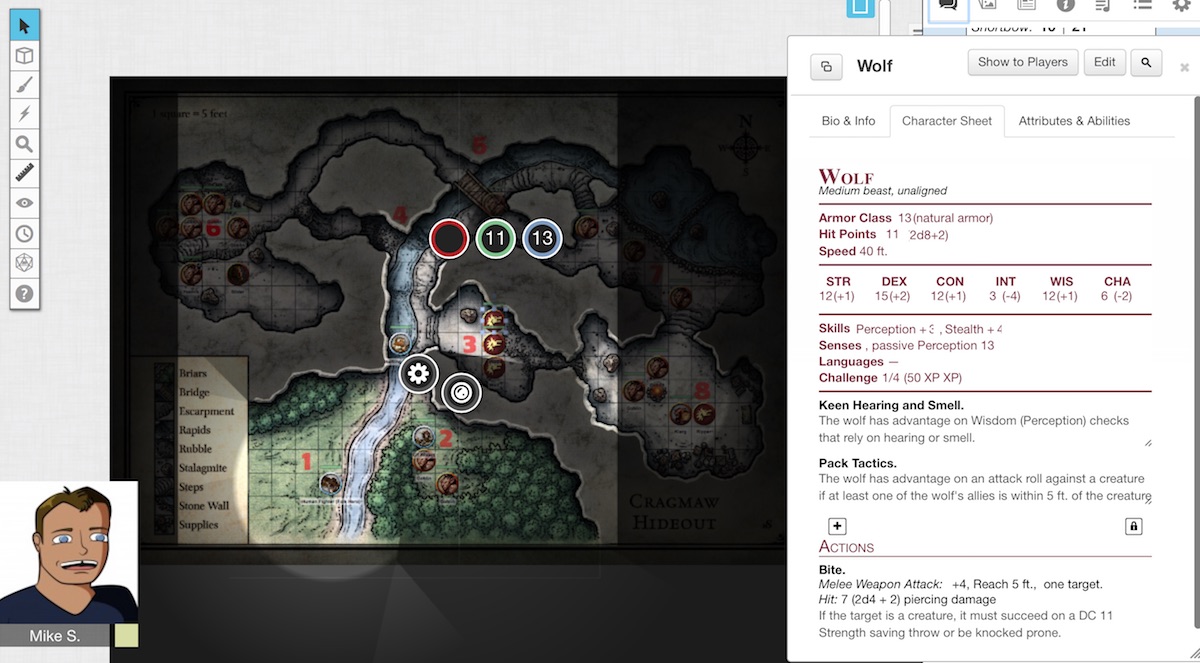 Roll20 is the recent winner of its fourth gold Ennie for best software and recently began partnership with Wizards of the Coast, releasing the excellent adventure Lost Mines of Phandelver and the campaign adventure Storm King's Thunder on Roll20.

These Roll20 adventure packs contain all of the virtual maps, tokens, statistics, and text you need to run these adventures. As an all-inclusive package, these digital versions of the adventures may very well be the most complete experience we can run for our players. Instead of drawing maps out on a flip map or using whatever miniatures we happen to have on hand to represent a pile of frost giants, we can use the actual maps drawn by the original artists directly in play and use the right tokens to represent those storm giants. These adventures also include the premium featured lighting effects, giving each PC token their actual point of view when traversing a dungeon. It's amazing space-age stuff if you ask me.

Running a D&D game online is very different from running one at the table, however. While some aspects are easier, like using the actual battle maps and tokens, other things, like reading the body language of our players, can be much harder.

Because I have little experience running games on Roll20, I reached out to my friend, James Introcaso. James is a fantastic force for good in the world of D&D, producing piles of excellent podcasts on the Tome Show and producing fantastic free products for D&D over at Ennie-award-winning site Worldbuilder Blog. James has run hundreds of games on Roll20 including games for D&D legends Greg Bilsland and Chris Perkins and was also one of the Roll20 conversion producers for Storm King's Thunder. He's extremely versed in running (and building) Roll20 games and possesses a fantastic D&D-focused brain from which, like the great illithid, we can slurp powerful ideas, experiences, tips, and tricks for making our online games great.

Your acting can be smaller. Because everyone is zoomed in on your face, the acting is closer to your face. What you do with your arms isn't as important as every movement of your face, since you're acting in close-up.

There's more you can do at a virtual table. A virtual table allows you to have a traditional top down battle mat and roll dice, but they also provide a lot of other options. Dynamic lightning and vision settings make darkvision and the number of torches a PC carries matter more. Tokens won't slide off the map if you want to try a side view mat. Any digital map, mini, or picture you own or have access too can be used in your table—many of them available for personal use for free.

It speeds up play, prep, and improv. All the math in a virtual table is there and ready to roll. Building PCs is often faster. Spells can be resolved more quickly. Instead of drawing out a map, you can just drag and drop. Instead of digging through a box for a token, you type in it's name and bam, it's there. When you buy a module through a VT, not only do you get the PDF, all the tokens, maps, handouts, etc are in the table ready to go. Plus you're online so looking up the rules via various SRDs is a quick search and click as opposed to flipping through a book.

There's less side conversations. When someone's turn is taking a long time or you're looking up a rule, there's less people having a side conversation, since everyone can hear everything you say. Whispering into the mic is basically the same as shouting into it.

Players are more easily distracted. Keeping players engaged is key since their favorite websites and social media are literally a click away.

It is more difficult to maintain intimacy. Just as many people would rather have sex in person instead of cyber sex, most people would rather play in person than online. When you're all together, it's easier to activate the collective imagination, to experience personal connection, and to get immersed in the story.

What are your three best tips for running the best online games we can?

Take advantage of virtual table features. To counter the lack of intimacy, you want to make sure you pick a great virtual table and get familiar with it. Not only do you not want to spend half the session figuring out how to roll a d6, you want to wow your players by using the table to its fullest ability.

Do some prep. You don't have to go overboard, but be prepared with a few encounters or scenes. If you stop to draw out a map, or look something up, try to keep the game moving by asking a character to share part of their backstory with everyone else (something they might share over a meal or on the road with the rest of the party).

Keep the game moving. Whenever you stop, someone could click over to facebook or their favorite Twitch stream and then that person has been taken out of the story. Online games suffer when they slow down, even moreso than in-person ones, so keep that pace going!

What are the three things best avoided when running online games?

Watch out for scenes where only one person does something. You certainly want to give each player a time to shine, but don't get bogged down for more than a few minutes in a scene where one character does all the talking, or is the only infiltrator into an enemy base, etc. If this is necessary for the story, have your players roll initiative, spend 3-5 minutes with one character and then switch scenes to another in initiative order.

Other websites. If you don't want your players constantly surfing the web while you're playing, stay off them yourself. They can tell when you're not engaged, even if you aren't with them in person.

Multitasking. A lot of people think they can run a game online and wash dishes or cook at the same time. This can be possible for a player, but for a GM it's not advised. You need to keep the story moving, so plan on limiting the distractions just like you would if all your friends were coming over.

How can we maximize the impact of our preparation time online? Where should we focus our attention when preparing a game?

I'd say it's the same as prepping for any in-person game, except that you should spend some time up front and get familiar with the table. These tools are fairly new and always updating and getting better, but to take advantage of those improvements you have to keep up with the tech.

Where do we think many end up spending time that doesn't have a big effect on the game? What should we avoid doing?

Virtual tables let you build huge maps - which is great... but only if you need them. Just because you can build a 300 x 300 grid map, doesn't mean you necessarily should. You might not even need to waste your time building a mat for certain encounters. Think realistically about what your players will use and don't get bogged down in your prep with your new toys. Learn to use them, get creative, but keep all the tricks you use at the table as well. Theater of the mind should still be on the table for sure. Not everything needs a battlemat.

How can we best keep our players' attention when we're competing with the entire internet?

Pacing and knowing the software you're using are key. Those things can slow down play which makes people open a new tab. Also if you have a player who takes a long time to decide what to do in combat, make sure that person understands the importance of keeping things moving along. Then do all the things you'd do at the table to engage players. Remember—it's not all about combat, just because a virtual table makes it easier, doesn't mean you should leave exploration and interaction behind.

What parts of the game do players seem to enjoy most when playing online?

The features of the virtual table that let me do things I can't do at a normal table. Dynamic lighting, side-view battle mats, and macros to speed up play.

What do you think people are missing about running games online? What word do you want to get out there about running online games?

The tools out there can really enhance your game plus it means moving away for work or family doesn't have to break up your game. Roll20 literally saved my game. We had been defunct for a year and then were able to play again when we discovered it. It cuts down on commute time, which means more time gaming with friends. Plus these tools can be use in-person if you want to explore them with your regular group around a physical table.

What is the best way to find players and GMs for online games?

Tons of message boards. Roll20 has a place on their site to advertise for players or GMs. Google+ has groups. Facebook has groups. Put out the call on Twitter with a hashtag. Meetup.com has places for virtual groups. The AL has a digital region now. You have tons of options.

[Finding a good GM] is a little more difficult. I'd say search around on the places above, find a GM with a cool concept and then google away or search the site you found them on for other posts to make sure they're not hateful. There's less risk gaming online than going to a stranger's house, so you have to be willing to take the plunge. One shots are a great way to meet new GMs and then ask if they have a longer campaign you can join.

A Different Way to Play

A big thanks to James Introcaso for sharing his experience running Roll20 D&D games. Above all, it's useful to understand and remember the differences between running a tabletop D&D game and running one online.