The fifth edition of Dungeons and Dragons takes us back to a time when combat encounters can be as short or as long as we want. Where many battles in D&D 4e took an hour or longer, 5e's design allows for everything from tiny skirmishes done completely in narrative to giant set-piece battles with multiple waves of opponents, tons of complications, and interesting goals.

Today we're going to focus on the far end of this spectrum: the big set-piece battles. These are the huge battles that take as much time as they need to and that your players will remember for years. Let's jump right in.

A good set piece battle needs a fantastic location (!). The place needs a lot of nooks and crannies. It needs objects to screw around with. It needs lots of nodules and bony protuberances that your players can look at and say "woooo".

You can grab some high level inspiration for your set-piece battle at places like DeviantArt and see what catches your eye. That will give you an overall feel for the battle but, for more detailed encounter locations, poke through images of battle maps from both Wizards of the Coast (which are mostly now out of print unfortunately) or Pathfinder flip-mats.

If you like these maps and have access to the physical copies of them, they can become the center of your set-piece battle. Most of these detailed maps have all of the nooks, crannies, nodules, and protuberances we want to grab our players' attention and make the battle interestingly complicated. 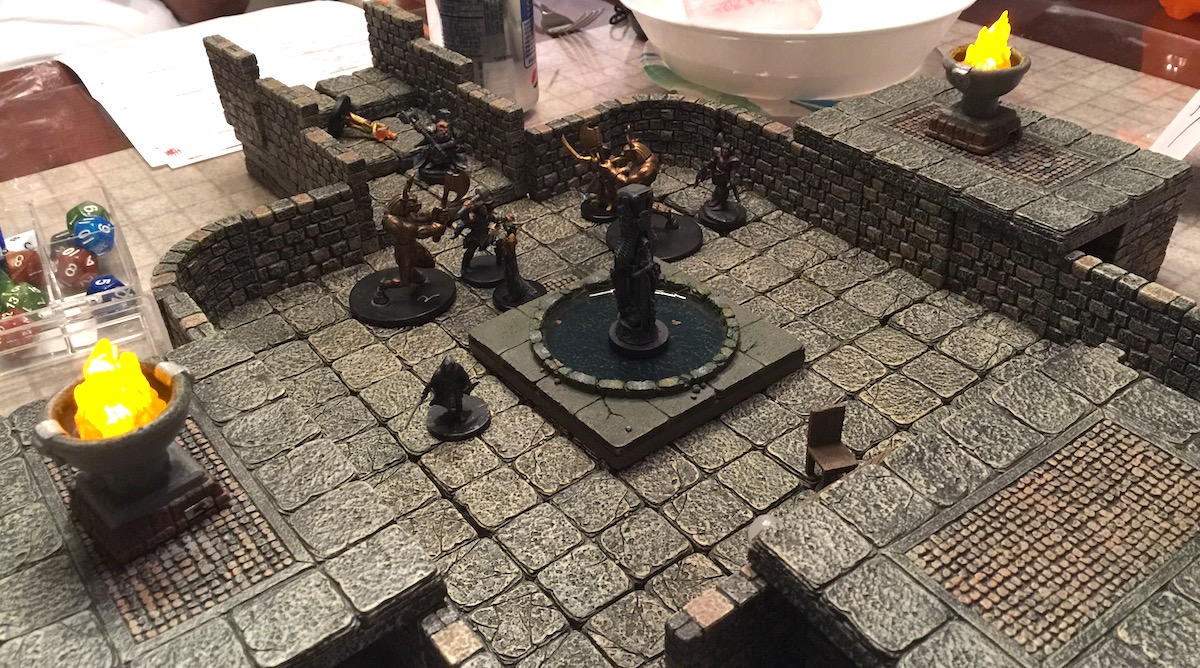 Great set-piece battles often go into the third dimension. They have towers, they have raised platforms, they have battlements. Players are often use to fighting on two dimensional planes so when you add all of these raised bits, it really grabs their attention.

Adding that third dimension can be costly, though. You can go all out on the Dwarven Forge if you can afford it but many cannot. Instead, you can use some tricks like building a portal prop or using sewing spools from Michaels. With some creative thought you can dig around the house to find interesting ways to build up your battle arena.

A lot of players have had luck with Hearst Art Molds for building Dwarven-Forge-like pieces without having to refinance the house. There's a definite trade-off between time and money when it comes to 3d terrain, although ANY 3d terrain is likely to take up a good bit of time. This may seem contradictory to the teachings of the Lazy Dungeon Master but we'll get to that in a bit.

Adding miniatures as props is another cool way to go 3d. If you have any giant or unpainted miniatures you can use these to represent statues in your set-piece battle. Statues are an awesome complication because many players will assume they're going to come alive and drop a beating on them. Sometimes they do, sometimes they don't, but the threat is always there. Creative players will even learn how to use these statues to their advantage, which we should encourage.

Statues can also form the centerpiece for an ancient monument to add a nice hairy complication to the battle area.

Another option is to build up using foam. You can buy a giant slab of this stuff for about $15. You'll need a nice long craft knife to cut it into the right shape and size. Some 4x4, 4x6, and 8x8 blocks can build up all sorts of interesting shapes. Stick some dungeon tiles on top with some poster putty and you can have a cool 3d setup without spending a ton of money. 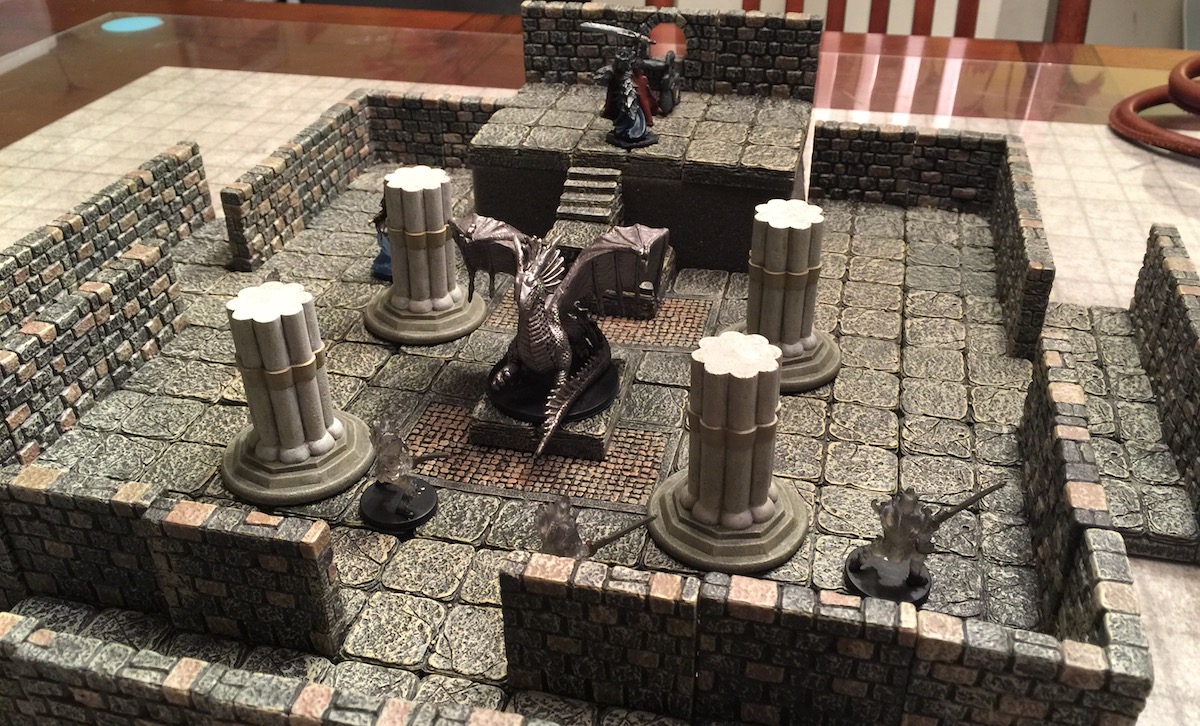 A Goal or Two

Good set-piece battles need to have some interesting victory conditions other than just "kill all the bad guys". This could be really complicated like completing a series of skill checks to charge four ancient statues with arcane energy or it could be as simple as killing a particular monster or monsters to defeat the rest of them. Here are a handful of ideas for goals:

You can combine a couple of these goals in a single big battle or mix up a goal like this along with a couple of waves of monsters to switch between stressful puzzle solving with good old fashioned slaughter.

Set piece battles are begging to be used for longer and more complicated combats. If you throw giant piles of monsters at the characters, however, you could overwhelm them. One way to keep things interesting and still use the same set piece for your battle is to break it up into parts.

Waves of monsters is a good and easy way to do this. During a fight, at a certain point, a bunch of new monsters can enter the arena. Maybe they're summoned or teleported in. Maybe they rush in from the outskirts. Maybe the characters even see them coming and know they have to deal with whatever is in front of them fast before the next wave comes.

If these waves would overwhelm your characters you can put in some in-game systems that can replenish the characters' health, spells, and abilities. Maybe the rush of combat fills them with a new resolve, giving them the equivalent of a short rest. Maybe defeating a particular foe fills them with a powerful energy of vengeance and victory. Maybe there's something more practical like a pool of holy water that, when ingested, replenishes hit points, allowing for the use of a recovery, or allowing for the expenditure of hit dice.

As the characters do battle, the environment might change on its own or they might be able to change it as they fight. Perhaps they fight on a crumbling tower slowly falling over the edge of an abyss. Perhaps they battle on an airship that's on fire. Perhaps a great ritual brings those huge demonic statues to life while a portal in the center of the room grows ever larger and more violent. There's lots of ways the environment of a set-piece battle might change.

The characters themselves might have interesting ways to change the environment. Instead of planning it all out, fill the arena with interesting features and enjoy how the players figure out what to do with them. Load-bearing pillars, strange holy relics, vast statues, narrow crumbling bridges, razor-sharp stalactites; there are many details that crafty characters can use to their advantage.

Building big set-piece battles seems contradictory to the ways of the Lazy Dungeon Master. The maxim of the lazy dungeon master says that the less we prepare, the more flexible our game becomes. Building a single big location can remove that flexibility. If we spend two hours building up a really cool 3d terrain setup, how likely are we to let the game steer away from it?

For this reason, it's important that we understand when to build a big set-piece battle. In short, we can come up with a single simple rule for building a set-piece battle:

We only build a set-piece battle when we KNOW the game is headed that way.

This doesn't mean we should force it that way, it means the game is already headed that way no matter what our desires were or what actions the characters take.

Here's a cheap trick for ensuring a game will include a big set-piece battle without forcing the story to head that way: end your game right before a big set-piece fight. If the characters kick in the door of the lich queen and witness the resurrection of the six antipaladins; THAT'S when we end the game. We leave it on a cliffhanger that's sure to stick in the minds of our players AND lets us build out a big set-piece battle to begin our session next time.

Another cheap trick is to use the cold open and begin your game with a big set-piece battle even if the previous game didn't end there. You can jump the story forward a bit and throw the characters right into the middle of a big fight. This works well for single-session games or the first session of a longer campaign.

As an example, say we're running a Dark Sun campaign. We can jump right into the story by starting off in the arena or being ambushed by a band of cutthroats at an old ruin. If we know our campaign is going to start that way, we can set up a our nice big set-piece battle without worry that it won't get used.

A Nice Change of Pace

Not every fight needs a set up this big. Now that games like D&D 5e give us flexible encounter lengths, we can choose which fights should be fun small skirmishes, perhaps executed in the narrative, and which should be big fun set-piece battles with 3d terrain, interesting goals, waves of monsters, and lots of details the characters can interact with.

Like many aspects of this hobby of ours, set-piece battles are an excellent tool to add to our ever-expanding toolkit. It's there, ready to use, whenever it will make our game even more fantastic. Give it a try.