The Hunger: A Level 1 to 20 Gnoll Campaign

Reading Volo's Guide to Monsters, along with the Monster Manual is a fantastic way to fill our head with D&D lore that helps us plan our games and improvise while we're running them. If you get nothing else out of this article, consider how much value you can get by reading these books cover to cover to steep yourself in D&D lore.

Reading the section on gnolls in Volo's Guide got my head spinning around the idea of a full level 1 to 20 fifth edition Dungeons & Dragons campaign built around gnolls. I had in my head an image of a hyena twitching in the remains of a half-digested corpse of a villager (gory, I know). As the characters watch in horror, the hyena starts to twist and break like the best scene in American Werewolf in London. The party witnesses the full transformation (or maybe partial transformation if they decide to blast it to pieces before it finishes) of a hyena into a gnoll. 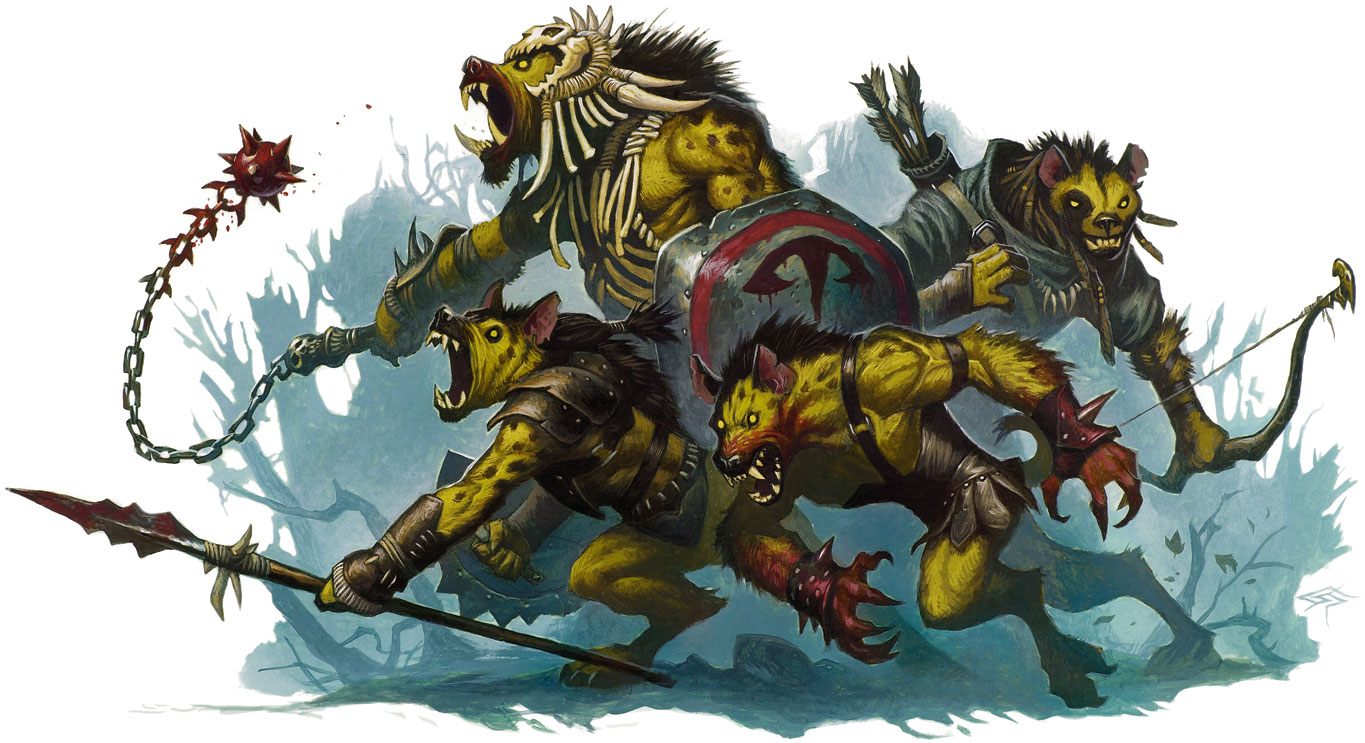 A whirlwind of events would take them from that single scene all the way into the Death Dells where they will hunt—or be hunted by— Yeenoghu the demon prince of gnolls and the most powerful minions on Yeenoghu's home plane of existence in the Abyss.

Can we build an entire campaign around this central pillar? I believe we can! Of course it won't JUST be gnolls. We'd have lots of side threads going on too, but building a full level 1 to 20 campaign arc focused on Yeenoghu's Hunger sounds like a lot of fun to me, so let's dig in.

Following the steps in Return of the Lazy Dungeon Master for building new campaigns, we start with a central theme for the campaign. The shorter the better, so here is my campaign pitch in three words:

That's simple but it's a good central pillar around which to build the campaign. It's a quest the characters can get early on in the adventure and work towards all throughout their characters' levels.

Six Truths of the Hunger

Next we come to the campaign's six truths. What sets this campaign apart from others? Here we list the six things that make this campaign unique among campaigns. These are truths we will share with the players so they know what to build their characters around.

This is going to be a campaign of overland exploration and dungeon delving and will have all three pillars of play. We can reinforce to the players that they will will want to build players with the following goal:

"My character wants to work with their fellow adventurers to find the source of the bloody hunger that grips the land and end it."

We don't have to build out an entire campaign from end to end here, but we will outline the major story drivers of the campaign. We've borrowed the idea of Fronts from the excellent RPG, Dungeon World.

We hold these fronts loosely. New fronts might pop up and old fronts might change drastically. Volo's Guide includes a wonderful section on hobgoblins as well as gnolls so we can add them as a third party that might end up as allies of the, enemies, or both for the characters and their goals.

When it comes to the selection of monsters we might choose or this campaign, Volo's Guide has an excellent section on the Anatomy of a Warband and on Gnoll Allies that works as a great checklist of potential monsters we can sprinkle throughout our campaign.

While we don't need anything more than the above to run a decent start to a campaign, it might be fun to write a loose outline of the places the characters might visit and the events that might occur as they go through the campaign. I picked twenty such places and events, one for each level of the game. I have no illusion that these will all get used at exactly the right level but it gives me a loose outline of ideas I can go through when running adventures. I am happy to throw any or all of these away as the campaign progresses.

Level 1: The Dying Hyena. The party encounters a dying hyena that turns into a gnoll in front of their eyes. More hyenas howl in the distance.

Level 2: Slaughter at the Village of Nix. The party sees the slaughter of the village of Nix and hunts down those that committed the act.

Level 3: The Charnal Pit. The party witnesses the gnoll's feast at the charnel pit outside of Nix.

Level 4: Assault on Fort Kellum. The party arrives at Fort Kellum to see it under assault by the gnolls.

Level 5: The Dead Gate. The characters explore the ruins of a planar gate previously used by Yeenoghu four hundred years ago and the ruins of dwarves and deep gnomes that surround it.

Level 6: Citadel Gallax. The party explores, infiltrates, or is invited into a ruined citadel now rebuilt by the Black Fist hobgoblin warband.

Level 7: The Tower of Fangs. The party faces the cult of Hunger at one of its temples and discovers their dark portents.

Level 9: The First Portal. The party finds and close the portal Yeenoghu used to enter the prime plane.

Level 11: The Temple of the Hunger. The party faces the cult of Hunger and its high priest to recover the Book of Savagry.

Level 12: The Demon Rift. The party discovers and must close a rift spilling out scores of maw demons like an infected wound in the world.

Level 13: The Hunters at the Twisted Shrine. At a long-forgotten shrine, the party must survive an assault by a war band of gnolls specifically born and bred to hunt them down and slay them.

Level 14: The Assault on Baldur's Gate. The party arrives at Baldur's Gate to find Yeenoghu and his army waging an assault on the city.

Level 15: The Prince of Savagery. The party faces Yeenoghu and his army in order to save Baldur's Gate.

Level 16: The Gateway. The party faces Yeenoghu's gatekeepers and enters the gateway to the Death Dells.

Level 17: The Death Dells. The party begins their exploration into Yeenoghu's Abyssal plane.

Level 18: The Maw. The party travels through a huge sinkhole consisting of the rotten corpse of a single huge maw demon.

Level 19: The Hunting Grounds. A twisted maze of brambles surrounds Yeenghu's lair in which the mightiest gnolls of the demon prince eternally hunt their prey.

Level 20: Yeenoghu. The party faces the Prince of Savagery on his throne of corpses.

A Loose Outline and a Fun Exercise

When we sit down to plan a campaign like this, we need not plan too far. Things are going to go off the rails from the very first session and that's what makes these games so much fun. We can, however, get our minds working by thinking about what might happen and have some fun diving deep into the lore of the game to see where our minds go. Such exercises keep our minds limber and keep us ready to run some great games even if we never get around to running a campaign like this.

When you think of your own campaign, where does your mind go?