Different players have different opinions on skill challenges. Some love the chance to interact in the world while others see them as a speed bump between battles. For this latter category, we can try a different way to bring them back to this element of the game. Today we’re going to look at a new way to run skill challenges that moves the choices and the mechanics over to the players so they can make more meaningful choices and work closer as a team to accomplish the challenge laid in front of them.

4e combat also gives a great deal of choice, some might even say too much choice, to each player. Unfortunately, players have few mechanical choices when it comes to skill challenges. They choose a skill, most often the highest one they have, come up with some story to try to support their choice, roll a die, and hope for the best. There’s little tactic, there’s little interaction between players.

When thinking about skill challenges, we can look at another die-rolling game system with very simple mechanics but very similar mechanics to a skill challenge, Zombie Dice. In this Steve Jackson dice game, you roll a series of dice deciding when to stop rolling based on whether you have rolled three failures. Different colored dice present different odds. While the game itself is very simple (thirteen six-sided dice in a can), deciding when to stop is the key factor that keeps the game fun.

Skill challenges can be the same way. Instead of a single die roll against an unknown difficulty, we can hand the mechanics of the challenge directly over to the players using a Skill Challenge Worksheet. The worksheet shows them the number of required successes, the success and failure state, the relevant skills and DCs, and any potential advantages. Players get to choose what they want to try, who needs an assist, when to use an advantage to recover a failure, and what their odds are for each series of rolls.

The mechanics of the skill challenge work exactly as written, only now we reveal the entire system to the players and let THEM choose how to accomplish it. 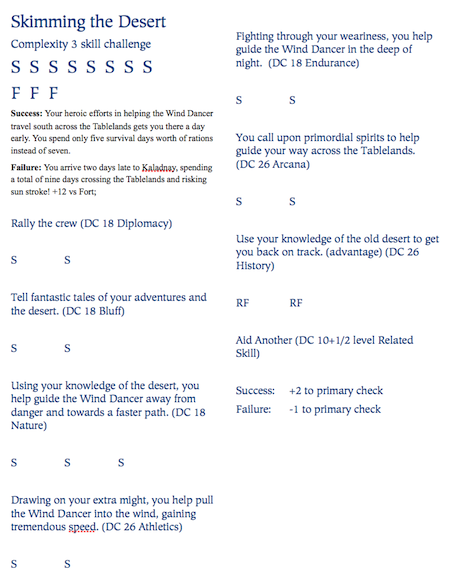 Widening the gap between the players and the story

The big risk with a system like this is that it further separates players from the game world. Instead of getting into the situation and thinking up the best way to accomplish the challenge in the game world, players will simply work the numbers to give them the best chance to succeed. For this reason, its important to flavor the worksheet so they know what their characters are doing. As they roll their checks, you can also describe what is happening in the game world.

Many groups play D&D for the story but for groups that prefer the gameplay, this is another way to run skill challenges that reveals the strategy of the rolls over to the players. It gives them a wider range of choices that matter and gets them to discuss as a group how to accomplish a large task. While it may further abstract players from the story, for those that prefer the mechanics to the lore, a skill challenge worksheet handled by the players directly can bring them back to the game instead of heading out for pizza.