We've talked previously about running narrative combat with D&D 5th Edition but we can often get stuck when trying to understand exactly how we can do so. Sometimes running combat completely in the narrative can be too hard but we don't want to jump straight into a gridded system. We want something in between, something that keeps combat in the abstract but helps players and DMs understand what's really going on. Today we're going to look at one way to track abstract combat. 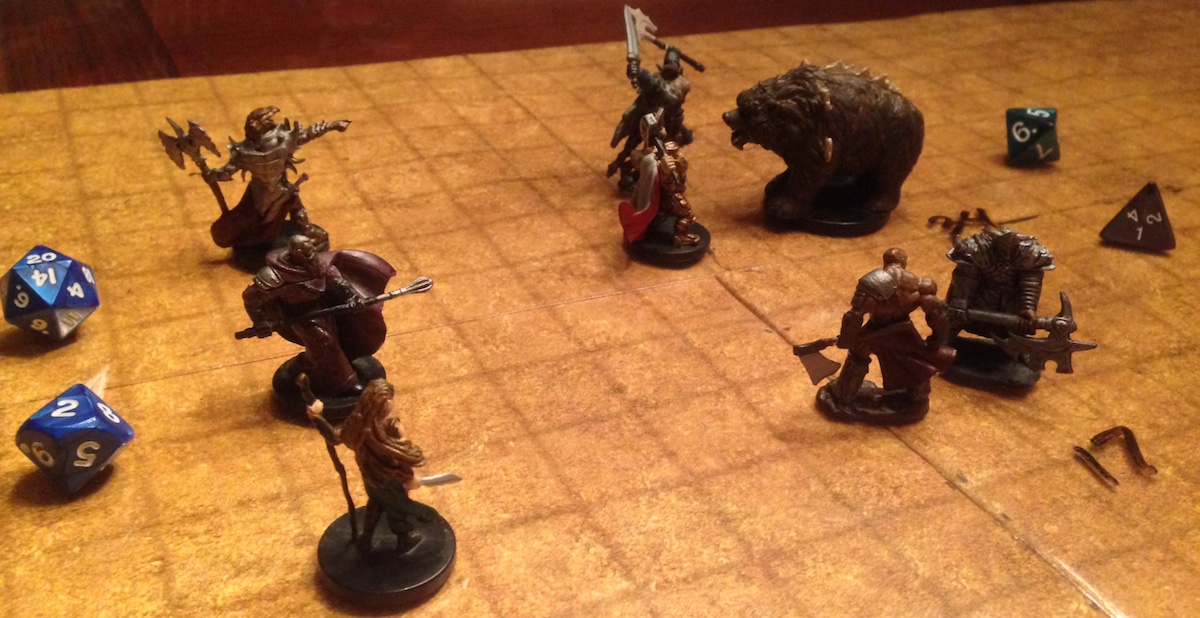 Before we begin, we want to lay out our goals for tracking abstract combat. Here are a few that come to mind.

With our goals in mind, we can take a look at our tools. Here's a set of tools that will make tracking easy.

If you're a fan of the older Final Fantasy games, you remember how abstract combat played out in those games. PCs were lined up on the right. Monsters were on the left. You chose some actions and watched your little icons move an inch over, wave a sword, and a damage number bounced down on the monster. It was a nice simple way to run combat and one we can use in our own tabletop games.

Here are the things care about with abstract combat:

We can lay miniatures out on a mat to help us understand these things and still ignore the grid and the distance it represents. We place miniatures together or apart based on the abstract distances mentioned above. This lets everyone see who is in melee with who, and who is separated off from the rest.

With a Paizo flip mat we can write damage and effects directly on the map which makes tracking these things quite a bit easier and lets everyone see everything that's going on.

What About Area Effects?

There are certain aspects of D&D 5th Edition that make narrative combat difficult. Area effects are a big problem and there isn't an easy solution. Players and DMs could argue for an hour about whether or not it's two or three kobolds within the fan of a burning hands or whether that fireball hits four PCs or only three. Determining whether or not a dragon's breath hits the whole party, only a couple of targets, or only one can become a big area of contention.

One solution is, if it's going to be a problem, skip narrative combat and go back to the grid. There's no reason you have to do narrative combat for every battle. If you see area effects coming into play, use the grid to keep everyone honest.

As a second solution, you can simply make an agreement with the group that the DM arbitrates these decisions. The DM decides how many monsters or how many PCs are caught in an area effect. You'll want to make sure everyone agrees and understands this before you run a battle this way. Being fair can be hard to do so you'll want to make good work of the dice and try to come to an agreement that everyone can, at least, understand.

Again, we can look to 13th Age for a solution and have area attacks hit a random number of targets. Small blasts hit 1d3 targets. Bigger blasts hit 1d4 or 1d6 or even 2d4 if they're really big. You can even roll randomly to determine who gets hit. This turns over the decision to the dice and helps everyone recognize that things are a bit more fair. You might be unlucky but at least the DM wasn't being an asshole about it.

Before you jump right into this method for tracking combat, you will want to explain it to your group. Try it on a battle that doesn't have a lot of moving parts, such as a small battle with limited environmental conditions and a single enemy such as a battle against a group of goblins in a large cavernous room. Explain that the display doesn't represent actual positions or distances but instead is used simply to track combatants and their relation to one another. Once your group begins to understand what they're looking at, they'll begin appreciate the simplicity.

One Tool for Your Combat Toolchest

This method of tracking combat is only one method you have at your disposal. Sometimes you might just want to talk through a battle against a flock of stirges. Other times you want a big three-dimensional set piece battle against a boss villain and her hordes of henchmen. This article only describes one of these methods and it is only one of many you can use. Don't force yourself to always use one style or another. Choose the right tool for the right job. Choose the format that brings the most fun to you and your players.