While we pay much attention to the D&D Next Playtest there has never been a better time to dig into the 4th edition of Dungeons and Dragons. After four years, we have the most polished 4e products available, ones playtested throughout the life of the edition. If deep tactical roleplaying and rich refined character mechanics are the style you seek, 4e is hard to beat.

This article, a rewrite of the original article entitled A New DM's Buyers Guide to D&D 4th Edition from January 2011, aims to help new dungeon masters figure out what they need to run great 4th edition D&D games. 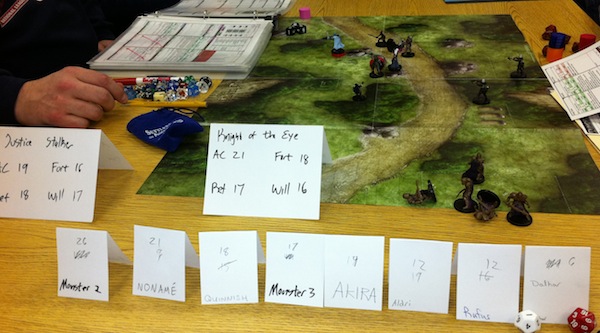 Where to begin: Dungeon! and the Red Box

If you're just starting out with dungeons and dragons and want to get a feel without a big investment, consider starting with the D&D Starter Set, also known as the Red Box. While it doesn't contain character creation rules, it does have everything you need to play the first three levels of the game. It also includes an excellent poster map you can reuse for years.

If you're not sure that your friends or family will take to D&D, consider trying out the Dungeon! board game. Based on the original version from 1975, this board game is a great way to get a feel for fantasy dungeon delving. Make sure to try out the cooperative rules to give it a more traditional D&D feel.

The DM Kit, Heroes of the Fallen Lands, and the Monster Vault

After you've gotten a feel for the game and want to go a bit further, pick up the three best D&D 4e products you can buy: the Dungeon Master's Kit, the Heroes of the Fallen Lands and the Monster Vault. These three products give you everything you need to run years of D&D. All of them are well refined from previous 4e products and include not only the rulebooks but poster maps and tokens to represent both PCs and monsters.

If the core classes in Heroes of the Fallen Lands aren't enough for you or your group, add Heroes of the Forgotten Kingdoms to add five additional classes to the mix.

If you're looking for some help with game worlds, consider world soucebooks such as the Eberron, Forgotten Realms, and Dark Sun.

As we've discussed before in battle map comparisons, poster maps are one of the best accessories you can buy. They're cheap, easy to set up, and beautiful. When you buy the Beginner's Box, the Monster Vault, and the DM Kit, you'll already have ten poster maps in your library. You can add a whole bunch more by picking up the three Dungeons and Dragons map packs: Haunted Temples, Vaults of the Underdark, and the upcoming Shattered Keeps. Add in a GameMastery Flip-Mat and you'll have all the flexibility you need.

With all the tokens included in the Monster Vault, minis are certainly optional. If you're dying to add some real PC minis to replace the tokens in the DM Kit, take a look at the Heart of Cormyr Dungeon Command set for a set of great hero minis. You can also pick up the Pathfinder Heroes minis for a small selection of high quality minis. Here are some other tips for buying miniatures.

After some discussions on Twitter, I'm adding D&D Insider to the list. D&D Insider gives access to hundreds of downloadable PDF adventures and articles including a few from yours truly. D&D insider is $10 a month or $72 for the year. Most importantly for your 4e game, D&D Insider gives you access to the character builder. Though filled up with all of the legacy feats, powers, and items of older 4e sourcebooks, you can generate an "Essentials" character quickly.

While the products above will help you run great D&D games for years, there are some products you might consider avoiding. Dungeon Tiles seem like a good idea but end up being more of a nuisance than they're worth.

For sourcebooks, consider avoiding any books published before September 2010 and stick to more polished post-Essentials publications.

An alternative, the Pathfinder Beginner Box

We have no edition wars here. If you're looking for something a bit more traditional in your D&D, though still rich in character mechanics and tactical combat, the Pathfinder Beginner Box is a fantastic product, one superior to the D&D Beginner Box in a lot of ways except price (it's ten bucks more expensive). In this box you get stand-up cardboard PC and monster tokens, a wet and dry erase poster map, an adventure, a miniature monster manual, pre-generated characters, and character creation rules for four classes up to level 5. It's a great deal and a lot of game packed into a small box. The Pathfinder Beginner Box won the gold Ennie for Best Production Values and it is well deserved. It's a great product.

A great time to start

While it might seem like the glory days of 4e are behind us, there is no better time than to dive into 4th edition. If tactical roleplaying games appeal to you, you've come to the right place.