Note, this article was originally published on Critical Hits on 29 November 2010 and is reprinted here with permission. When reading it, consider the context of the time. D&D Next hadn't been announced. 13th Age didn't exist yet. I ended up playing a lot more of 4th Edition after writing this, though I have moved off to other systems at this point. Consider this article as a slice of personal history.

As I write this I sit less than 12 hours away from the last adventure of a level 1 to 30 4th Edition Dungeons and Dragons campaign and I'm feeling strangely emotional about it. I'm extremely lucky to have players willing and able to play nearly every week for two and a half years. I've had to come up with an interesting adventure for over 100 sessions that tied together a story spanning the entire level range of 4e D&D. 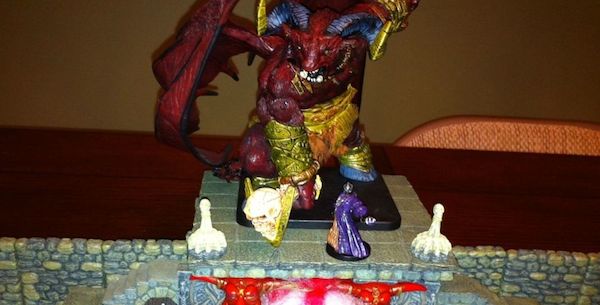 Over this time I probably spent an average of 10 hours a week working on my campaign. I built out the battle maps, outlined the story, generated the encounters, came up with props, and organized the events. While I followed the H1 through E3 published adventures, I ended up tweaking, converting, or discarding a lot of that material for my own.

I lived in that world for a long time. I put myself to sleep at night thinking through the eyes of my NPCs. It was a lot of work and I regret none of it, but I spent so much time on it that I don't know exactly how I feel now that it's over. I'm happy to have completed the longest single-story campaign I've ever run in my life. I'm also sad to see it end. Reading the body language of the players as I read the final paragraphs of flavor text, I think they felt much the same.

So what did I learn? How do I feel about 4th Edition now that I'm completely through it? What would I do differently if I could start over? All questions I will try to answer now.

It's pretty clear to me that the rules-heavy nature of 4th edition creates a very complicated game. With every power adding a new rule it is impossible for anyone to understand how all these things will act together. At last count there are 55 player classes, 3,000 feats, 7,400 powers, and 8,800 magic items. That combination of tweet-sized mini-rules is almost collapses in on itself.

I long gave up trying to figure out what abilities and combinations the PCs had or how they worked. Near the end, there wasn't any bad roll that couldn't be boosted up by five points using some combination of forgotten feats, situational bonuses, magic items, or triggered actions. People would say things like "deep rumble strike" and then hit an invisible monster for 130 damage. Another would say something "astral wintersgate" and then negate an entire monster's round of damage. There wasn't a way in hell I could tell if they had a real power or were just making up nonsense words and then doing whatever they wanted to do.

I sound like I'm complaining but 3.5 was even worse for me. Chainwielding half-orcs and solid fog spells trivialized every monster I ever threw at them. High level D&D games pre-4e seemed to end up as coin tosses. Heads you kill them all, tails they kill you all. I had monsters who could cast burst attacks that killed anyone within the burst on a failed save versus a ridiculously high DC. Of course, with 4e, I miss having monsters even potentially that lethal.

The Catch-22 of Essentials

When I wrote about D&D Essentials, I noted that what we have is a rebalanced version of D&D. I love Essentials and I'd love to run an essentials-only high level campaign except for one thing: my players would hate it. Part of their hate would come from seeing all the other options they couldn't choose. Part of it would be knowing how much more powerful they used to be when they could pick from any source. Part of it is that Essentials is potentially too simple to keep players interested for a full 30 levels of play.

Further, an Essentials-only campaign really doesn't change much at the heroic tier, the level most games seem to focus on. Having an Essentials-only game matters most at the paragon and epic tier and that's the tier where players most likely want a lot of options. Even writing this, I have no idea what the best solution is to this quandary.

I do know that, looking at the Red Box, the Dungeon Master's Kit, the Monster Vault, and the Dungeon Tile Master Set, that D&D would have been a very different game for me if I was starting now. I wouldn't have to scrounge for minis or use a hodgepodge of scattered dungeon tiles and dry-erase mats to play like I did back in Keep of the Shadowfell. Finally WotC learned how to package and sell a complete version of the game that needs very little else to play. I don't know if I'd have the same tupperware boxes full of a thousand minis or the seventeen ziploc bags full of dungeon tiles if the game had been this complete when I bought it back then.

The Hardest Part About Running a High-Level 4e Campaign

Building an interesting story and setting up interesting environments for high-level 4e D&D games isn't too hard. While the story needs to be over the top, it isn't much different than coming up with interesting story at any other tier. The hardest part about running a high-level 4e game is keeping PCs challenged. PC power scales so high that it becomes nearly impossible to guess how they're going to incapacitate your monsters.

This leads to one of my biggest rules for dungeon masters - never fall in love with your monsters. I failed at this time an time again. I spent a ton of time building out big and powerful monsters only to see them emasculated, tied up, beaten, dressed up in a tutu, and dragged around the battlefield in a cart while the PCs poked them with sticks and laughed. My response was to spend even more time on the next monster. And so on.

4e doesn't do well with boss monsters above level 15. Even monsters designed after the Monster Manual 3 will still fall like a sack-full of rotten oranges against even a moderately well-tuned epic-tier party. I wish I had been more like celebrity DM god Chris Perkins and just let the dice fall how they may rather than worry so much about building up a great challenge. Sometimes you simply can't challenge them so let them have fun mopping the floor with your illithid's tentacles. Don't fall in love with your monsters.

What Would I Have Done Differently?

Story-wise, I was very happy with the way things went. Some players got a little less story than they wanted but the story certainly kept the game tied together. Keeping the story as simple as possible brought even the tactical gamers into the fold. I quizzed my players regularly and cut it back if they clearly weren't getting what was going on. As I ran it, I don't think I would have done anything differently with the story or NPCs.

For some reason I don't think I ever really remembered all the powers any monster had. To the last battle I often forgot many of the capabilities of the monsters I ran. I was simply careless and in my interest of keeping things moving fast, I'd end up forgetting a lot about the monsters triggered actions. One thing I'd do differently is pay more attention to monster abilities and take my time a little bit more with them.

The One House Rule I Wish I Had Used

If I could choose any single house rule that I wish I had implemented from the very beginning, it is this one. Under no circumstances except for perhaps an environmental effect should PCs be able to critically hit on anything but a natural 20. I saw no circumstance get more abused than extended critical hits combined with a great number of attacks combined with triggers that trigger off of critical hits. This mainly took place above level 25 but the damage boost due to higher crit ranges is visible as early as level 11. This is certainly not a change players will like so you likely can't implement it after they started to enjoy critting three times a battle.

The problem is, critting goes from something really fun to a simple battle tactic. Tactical warlords know they'll see at least a couple of crits a round so they can tune their character to offer free hits every time they crit. Players can choose weapons based on the bonus effects on crits knowing they will see them often. In the final battle of my game, we saw no fewer than eight critical hits in four rounds including four crits within four dice rolls on a single character. It's an unpopular houserule, but one I believe adds the fun of crits back in instead of letting them become an institution.

If I still haven't convinced you that crits are overpowered, listen to Mike Mearls in a Tome Show interview I did with him. Go to minute 17:00 mark.

Where Do I Go From Here?

I don't think I'll run another level 1 to 30 game again. From now on I think I'm going with the episodic adventure stylings recommended by our own Chatty DM. I'd like to run a few Gamma World games. I want to run a Dark Sun mini-campaign. I might like to play the adventure series of the DM Kit and Monster Vault* after that. I can't say if this is the way D&D was meant to be played, but I like the sound of it and I think it will fit in better with our group. I'll always look back fondly on the Shieldbasher campaign; from the day they discovered an Orcus worshipping serial killer murdering women in Fall Crest to the day they faced Orcus, the God of Death, in the throne room of the Raven Queen. For the past two and a half years, it's been one hell of a ride.