Using Curse of Undeath in your 4e Game

In November 2012 I received a review copy of the fourth Dungeon Command miniature skirmish faction pack, Curse of Undeath. Like Heart of Cormyr, Sting of Lolth, and Tyranny of Goblins; Curse of Undeath includes twelve miniatures, tiles, and all the other stuff you need to play the Dungeon Command skirmish game. Like my previous article on using Tyranny of Goblins in your 4e game, this article will give you some tips for using the miniatures and tiles in the Curse of Undeath as the centerpiece in a one-shot 4th Edition D&D adventure or as part of a larger campaign. 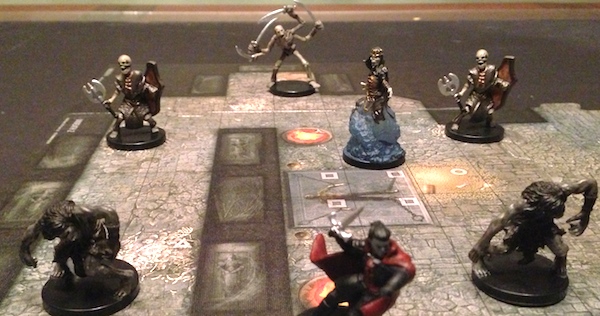 Use the Curse of Undeath Dungeon Command set as the centerpiece of your 4e #dnd game. (tweet this)

A scenario for level 11 PCs

Curse of Undeath includes monsters considered quite a bit more lethal than those in previous faction packs. The lich, vampire, and dracolich miniature all represent truly dangerous and powerful foes. Level 11 PCs are at the right level to face such dangerous foes. If you're running a one-shot adventure, focusing on level 11 PCs will give players the opportunity to feel the raw power increase of 4e's paragon tier.

If you are running a one shot, consider limiting PC options to Essentials or Essentials + Feywild, Shadow, and Chaos. Use inherent bonuses instead of default magic items to simplify character creation and options at the table. Give each PC a single rare magic item of their level or lower to act as their character's iconic possession.

Stats for the miniatures

For this scenario we're going to focus on the following miniatures and match them up with monsters from the best monster book for 4th edition, the Monster Vault. Here's the match up:

Creative DMs might find ways to re-skin the remaining miniatures to fit monsters or villains they want to include in their games. The Disciple of Kyuss would make for a fantastic villain.

The tiles included in this Dungeon Command set have numerous features we can use as terrain effects in our 4e encounters. Consider the following potential options.

Dude on the Altar: This tile features two firepots flanking a poor fellow chained to a large stone altar. This tile begs to be used as an in-combat skill challenge or roleplaying event. In our scenario, described below, we'll use him as a captured and drained celestial entity but he might just as easily be an undead creation, an infernal prisoner, or a simple human sacrifice.

Firepots: Firepots beg to be used as a simple terrain feature. Here's a quick example. Any creature adjacent to a firepot may, as a minor action, infuse their next attack with +5 fire damage per tier with a medium DC arcana or endurance check. On a failure, they take 1d10 fire damage per tier.

Bone Piles: Bone piles speak to grasping hands clawing out from the shadows of death. Any natural creature that enters a square adjacent to a bone pile is immobilized until the beginning of its next turn. As a minor action, a creature can break free from the grasp with a medium DC athletics or acrobatics check. They may also end the immobilization as a minor action by taking 1d10 damage per tier as the claws tear into their flesh.

Arcane Circles: Let's steal from D&D Next's "advantage" mechanic for the circles. Any creature in the circle can channel arcane energy into their attack by making a normal DC arcane check. On success, they may roll twice on their next attack and take the better result. On a failure, they must roll twice and take the worse result.

Chamber of the Lich Lord

Let's build a small scenario based on the miniatures, tiles, and monster statistics described above. In this scenario a lich named Varaxus captured a celestial servant of Pelor and is draining its celestial power to fuel his most infernal creation, the dracolich Ashwynd. When the PCs enter the chamber, Varaxus's agent among mortals, the vampire master Avaren, defends the chamber with his two vampire servants. During this battle, a sphere of protection surrounds the lich as he performs his ritual upon the chained celestial being (represented by the tile with the figure chained to the altar).

When Avaren the vampire is slain, the two remaining vampires take gasious form and flee. If both vampires are slain and Avaren is bloodied, he takes gasious form and returns to his coffin in the back of the crypt.

At this point, the PCs can break down the sphere of protection with three DC 19 arcana checks as standard actions. Any failure results in 3d6+14 lightning and necrotic damage to the PC attempting the check.

Once the sphere is broken down, Varaxus himself engages the PCs. He begins by summoning two soverign wraiths (the skeletons) and the skeletal tomb guardian. Meanwhile, raw celestial energy flows from the celestial creature, pouring into dark runes on the walls of a dark sealed chamber (the tile with the three doors surrounding the violet magic circle.

Any time the lich takes damage, half that damage is redirected to the skeletal tomb guardian. If the lich is reduced to 0 hit points, the tomb guardian and both of the soverign wraiths discorporate.

Three rounds after the lich begins his battle with the PCs, the walls surrounding the necrotic chamber break open revealing Ashwynd the Dracolich who engages the PCs.

A DC 19 religion or arcana check reveals that the life essence of the celestial entity on the altar is directly linked to the necrotic energy fueling the dracolich. If the PCs choose to slay the defenseless entity, they can immediately inflict damage to the dracolich equal to the dracolich's bloodied value. Otherwise they must take the dracolich down directly.

The battle ends when the PCs have destroyed the dracolich. As an optional victory, they can save the life of the celestial entity.

As described in the article on Tyranny of Goblins, sometimes a little constraint can make for some fun creativity. Finding ways to build an entire D&D adventure out of a single box of Dungeon Command can result in some fantastic adventures. Give it a try.