A New Dungeon Master's Guide to the Forgotten Realms

On a recent Twitter discussion, I brought up this tremendous value we DMs get by using the Forgotten Realms as our setting for D&D. I tended to get three types of responses. First, some people agreed. Second, some people said that they simply don't like the Realms. That's totally fair. Third, some people didn't use it because they are intimidated by the very advantage the Realms brings to us—the tremendous amounts of background and detail.

It's this third group that we'll focus on today, although this article may help anyone even if they don't like the Realms or are already on board.

In this article we're going to discuss how we might squeeze the most value out of the Forgotten Realms. We'll talk about where someone without any experience in the background of the Realms can leap in and get enough to run a great game in this vast and ancient world. 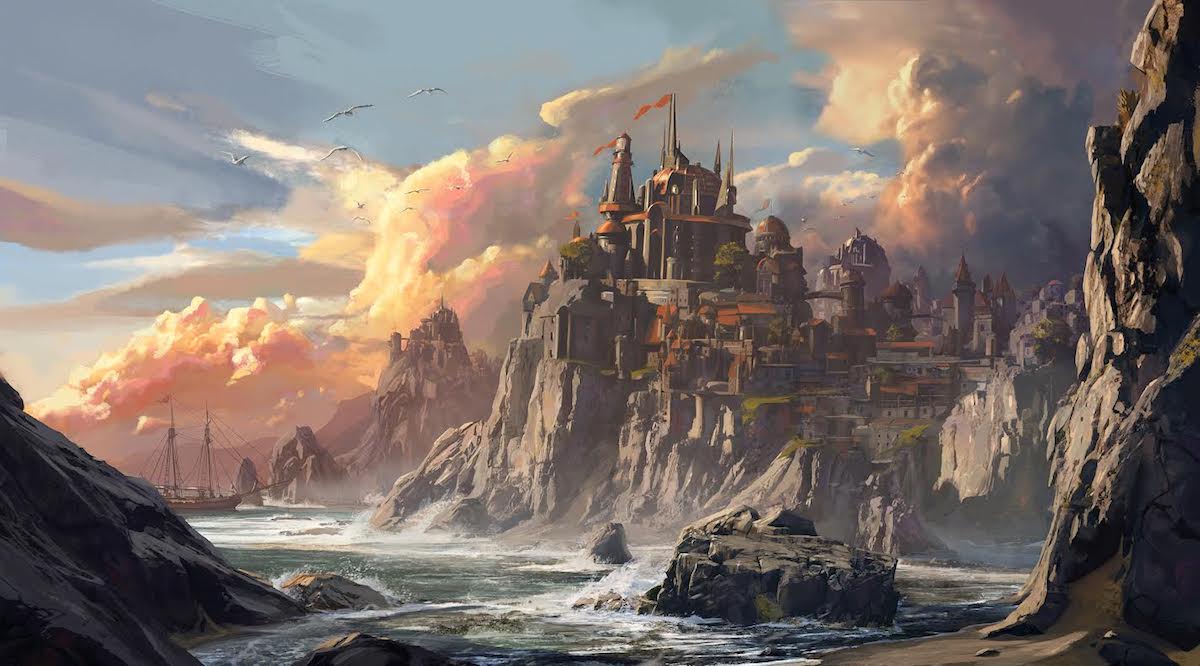 Here's a secret truth of D&D that might be a high barrier for many of us. DMs better love to read. We might be able to run a fair bit of D&D without reading a whole lot but the game gets considerabily better the more time we're willing to invest in reading the books that we use to run our games. This means reading the Monster Manual cover to cover. This means reading published adventures to really understand what's going on in them. This means reading about the campaign worlds the characters are going to explore. The more we read, the more we absorb these fantastic ideas into our brain, the easier it is to improvise a great game at the table.

We need not be slaves to what we read. This is our game and we can run it how we wish. Often, though, it's better to know what we're changing instead of just leaping ahead without understanding the world. Even if we have no intention of running what we read, delving deep into our D&D books fills our brains with ideas we can use when we prepare and when we run our D&D games.

Reading D&D sourcebooks pays dividends in every game we run. Reading books isn't a lazy technique but when we consider the value it brings us, the return is worth the investment.

This is as true with campaign worlds as it is with every other book.

As mentioned, there are hundreds of Forgotten Realms books available but the Sword Coast Adventurer's Guide is the widest ranging book on the Forgotten Realms published since the release of the fifth edition of D&D. It focuses on the western half of the continent of Faerun but for someone new to the Forgotten Realms, focusing on that side of the world is a fine idea. Nearly all of the published hardback adventures for D&D 5e also focus on the Sword Coast. If we plan on running those adventures, learning about the area makes it easier to run those adventures. There's a lot of Forgotten Realms to love in the east and south but we can focus on the west and have years of campaigns to run.

The Sword Coast Adventurer's Guide covers three major cities on the Sword Coast including Baldur's Gate, Neverwinter, and Waterdeep. There are dozens of other towns and villages covered in the book as well.

Purchasing the Sword Coast Adventurer's Guide on D&D Beyond gives us the advantage of being able to search the book on a phone. This makes it much more usable when you need to look up a location quickly.

Focus on a Single Location and Spiral Out

If we plan on running a game in the Forgotten Realms, we need not memorize the Grand History of the Realms or the full breadth of its locations. Instead, we need only focus on the areas of the Realms that the characters will likely experience in their very next session. If we're planning to run Lost Mine of Phandelver, still my favorite published 5e adventure, we need only worry about the areas around the village of Phandelin.

When we finish a session or adventure we might want to expand out to the locations the characters are likely to go to next. We DMs can expand our own view of the Realms by staying a step or two ahead of the character's travels.

Use the Forgotten Realms Wiki

The Forgotten Realms Wiki likewise stands as font of knowledge on the Realms. Written in the typical wiki fashion of "just the facts", it not only gives a summary of any given location or event but also shows us what published sources talk about that particular area. It's these sources that can help us dive quite deep into the Realms, beginning to really fill out this world in our minds.

Diving Deep into the DM's Guild

At this point we're using the Sword Coast Adventurer's Guide as our core reference for the Realms and using the Forgotten Realms wiki as our way to identify books that dive deeper into specific areas. Now we can go to the DM's Guild to find those books. There's thirty years worth of history of the Realms captured in hundreds of products on the DM's Guild if we want it.

If we're planning on spending a lot of time in Baldur's Gate, we might pick up the Murder at Baldur's Gate adventure which includes an excellent reference to the city. If we're going to be spending a lot of time north of the Spine of the World, we probably want to pick up the Legacy of the Crystal Shard which contains a full reference book on Ten Towns and the rest of Icewind Dale. If we're considering a campaign in Neverwinter, the 4th edition era Neverwinter Campaign Sourcebook can't be beat. Even deep locations like Menzoberranzan have older sourcebooks we can use should our characters decide to take a long vacation in the city of the Spider Queen.

We probably don't need to drop ten to twenty bucks on each of these locations if the characters are just visiting. If that's the case, the summaries in the Sword Coast Adventurer's Guide and the Forgotten Realms wiki are probably enough. Only if we're going to be running an entire campaign, or a good piece of one, in one of these locations will we potentially want to buy a whole sourcebook on the area.

The sheer scope of the Forgotten Realms, in physical size and in history, can overwhelm us if we let it. Instead, we can recognize that we only need to know what will directly help us run our next game. If we dive too deep, we might find we'll never have enough time to absorb the whole thing. We need only start with a surface-level understanding and then dive in as we want into whichever parts of it we'll need for our game. This lets us spend our time wisely as we sort through the work of hundreds of authors on hundreds of products that span back across the decades.

With just a little work, we too can become part of the Forgotten Realms.