Note, this article has been updated since the original written in 2012.

Many DMs like to use tent cards hanging over a DM screen to run initiative and this is a fantastic way to do it. There are a few small businesses out there who sell very nice tent cards for characters and monsters to use this way and custom character cards look great when printed nicely.

There's a lazier way, though. It's one I've been using for the past six years or so and, though it isn't nearly as beautiful and elegant, it's fast and easy. It requires very little preparation, no upkeep, and you don't need a DM screen to use it.

I first learned of this technique from Teos Abadia (Alphastream on twitter) who learned it from Paul Ellison, one of his long-time players back during the Living Greyhawk days. I've since had the opportunity to meet and play with Paul at a couple of gaming conventions. His fan-dance LARPing is second to none.

But I digress. Here's how these easier initiative cards work. 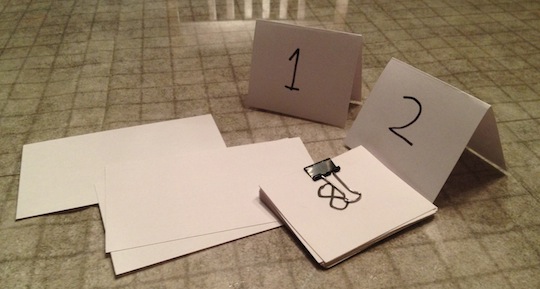 Take nine or so 3x5 note cards and fold each one in vertically in half. Then number them on both sides with the biggest black marker you can find, numbering them from 1 to 9. When you're done, you should have a set of folded 3x5 tent cards numbered 1 to 9 written on both sides.

When it comes time for initiative, have everyone roll their initiative result and then hand out the cards, with the highest initiative winnner starting at 1 and counting down. Each player puts their initiative card in front of them at the table. Now everyone can see who goes in what order.

Monsters too get their own initiative card which goes in front of the DM. The nine cards will cover six players and up to three different monsters. Any more than that and you have far bigger problems than how to handle initiative.

When you begin combat, look around the table to see who has card 1. After that person takes his or her turn, look for the next card down the list and so on.

At the end of the battle, have the players throw in their initiative cards to prepare for the next battle.

One way to make your life easier and help keep your players' attention on the game is to delegate the handling of initiative. At the beginning of your game, ask for a volunteer to handle initiative. If no one is forthcoming, ask someone in particular to help you. With the initiative cards in the player's possession, he or she can call for rolls and pass out the cards. This makes it easier for you to roll monster initiatives and give your scores to the delegated lord of initiative. It also spreads around responsibility for the management of the game which has side benefits as well. Players may be less competitive with the DM when they're helping to manage things outside of their character.

Unlike previous initiative card systems, this one requires no DM screen. Some DMs, myself included, now forgo the screen to keep dice rolls open and knock down the physical barrier between DMs and players. Letting go of your DM screen also keeps your DM kit small.

Caring for your cards

To keep your cards always standing upright (*snort*), use a binder clip to bind them together when not in use. Make sure to bind them in the folded position, not flattened, so they'll hold their shape over time. If treated right, this single set of cards could last the rest of your life. These cards are an excellent accessory to throw into your DM walk-away kit.