We live in a renaissance for tabletop RPGs. The net, social media, and crowdfunding has birth to some fantastic systems including Dungeon World, Fate Core, and 13th Age. 13th Age, a self-proclaimed love letter to Dungeons and Dragons, was developed by Jonathan Tweet and Rob Heinsoo, both former D&D designers themselves. 13th Age is a fantastic system with a lot of neat ideas packaged into a solid refinement of D&D. Many of these ideas are designed to be directly portable into your game. Today we're going to look at just one of these elements, the escalation die, and see how we can use it in our other D&D games.

For a full full review of 13th Age, please take a look at my 13th Age Review on Critical Hits. 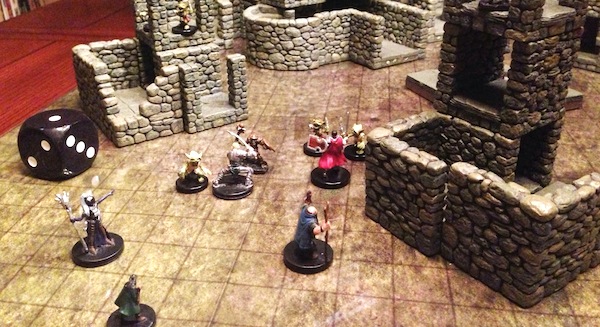 A Quick Primer on the Escalation Die

The escalation die is a very simple concept. You put the biggest D6 you can find on the table. Starting on the second round, all of the PCs get +1 for each pip on the die. At round 3, you flip the die to 2. At round 4, you flip it to 3, and so on. I may not have read it right but, if you pass pip six, I believe all of the PCs explode.

This is a simple way to keep battles moving fast and increase the chances for hits. 13th Age itself has many other mechanics tied to the escalation die but, as is, it can fit easily into any of your d20 RPGs. We dont have to limit it to attack bonuses for PCs, though, there's a lot we can tie to this little mechanic.

If the escalation die is not a core part of your D&D game, you can use it in specific battles and tie it to a story element of the game. Perhaps it is tied to an ancient altar that fills all nearby with visions of rage-inducing violence. In this method you might give both PCs and villains +1 to attack and damage for each pip on the die after the first round. Now the violence in that particular battle grows on both sides as the rounds go on. This makes later rounds more deadly than the beginning rounds, building up a nice bit of tension later in the battle.

The escalation die can also be tied to a damaging element as well as a bonus to PC damage. Perhaps waves of necrotic energy flow off of a statue of Lolth. At the beginning of each round, all non-evil entities in the room take 1d6 damage for each pip on the die after the first round.

You might even have the die represent a count-down. When the die hits six, the airship on which they fight might crash to the ground if they don't fight back the fire elemental lord that normally fuels the ship.

Following the ideas of Quinn Murphy's Worldbreakers, you can use the Escalation Die to trigger specific abilities of a boss monster. As the PCs battle the red dragon, the dragon's skin becomes hotter and hotter, releasing waves of heat as the battle escalates. Each point on the die adds 1d6 onto the dragon's attacks and melee attacks on the dragon result in 1d6 damage to the attacker. Now the PCs are motivated to kill the dragon quickly instead of letting it fester.

In 4e, you could also use the escalation die as a minion generator. Each round after the first spawns a new vampire spawn minion for each pip on the die. Now the PCs really have to end the battle quickly to prevent the onslaught of bad guys.

Just One Element of 13th Age

The escalation die is just one neat mechanic in 13th Age. The game has quite a few more that fit well into typical D&D games including the "one unique thing" and using backgrounds instead of skills. Give it a look, it's a fantastic product.