One of the greatest strengths in 4th Edition Dungeons and Dragons is the ability to re-skin one monster into another. I don't know if we had this ability in previous versions but, for some reason, the class-focused nature of monsters in previous editions didn't lend itself to such simple monster creation techniques.

And now we return to our article, already in progress.

While Gamma World includes a variety of monsters with which to threaten your players, these might often not be enough. Using the Monster Vault, however, you have dozens of options to reskin D&D monsters into creatures crawling across Gamma Terra. Today we're going to look at one particular reskinning example, turning a young white dragon into a cyborg assassin. 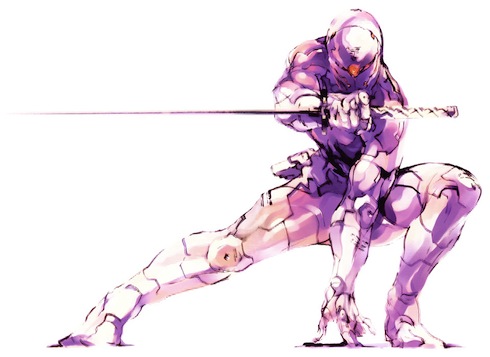 There are dozens of possible seeds that might lead your Gamma World party into the clutches of a powerful cyborg assassin. Perhaps a group of assassins hunts one of the PCs, hoping to either kill him or her or bring him back into their organization like the Bourne Identity. Perhaps the party has an item worth quite a bit to a very rich and eccentric old man who still has his family's collection of cryogenically frozen ninjas like those in Neuromancer. However your party crosses paths with this assassin, it is sure to be a dangerous confrontation and for that we need a dangerous base monster upon which to base this assassin.

The Young White Dragon from page 67 of the Monster Vault is a great example of an improved solo creature. It can easily threaten a party of five without aid or support, has ways to handle nasty status effects, and lots of cool attacks. Looking at the stat block, however, you might not see a lot of parallels with a cyborg assassin but we'll get to that.

The Young White's action recovery gets rid of nasty stuns and dazes (although these are less common in Gamma World), a standard assortment of bite and claw attacks, a powerful breath weapon, and a triggered tail slap. When bloodied, the White increases its critical threat range to 17 to 20 making it particularly dangerous at the second half of the battle.

Now let's start reflavoring the White into our cyborg assassin. The cyborg will have two primary weapons, a vibroblade katana and a plutonium flechette pistol. The vibroblade, a metal blade in two parts that vibrates so fast it gets red hot, will be his primary weapon and the flechette pistol will be his secondary control weapon. We'll reflavor the white dragon's Bite, Claw, and Fury attacks with the assassin's vibroblade attacks, a weaker quick attack for the claw and a more powerful attack for the bite. We will reflavor the dragon's breath weapon with a spray from the assassin's flechette pistol. Instead of cold damage, it will do radiation damage and we'll be nice by removing the slow effect.

We'll reflavor the tail slap with a vibroblade riposte and the bloodied breath will be another quick spray of the flechette pistol.

Instinctive rampage, the free action attack the white dragon receives, works as the assassin races past opponents cutting them with his vibroblade with a quick strike.

When the assassin becomes bloodied, he ups the power on the vibroblade by twisting a knob on the end of the blade. It begins to glow white hot and parts of it seem to start melting off. If it hits hard, however, it could sever through just about anything (crit range of 17 to 20).

To explain the assassin's large number of hit points, we'll describe him as having a utility belt with a powerful kinetic shield that gets weaker as it's getting hit. When he's down to 3/4 hit points, you might explain that the shield is now gone and they're hitting the real guy.

Here's a look at our our cyborg assassin came out. You'll notice we changed a couple of defenses around to better fit a ninja skirmisher instead of a big white dragon. We also added some anti-immobilization effects to the assassin's defensive traits and tweaked the reaction attack a little bit. I can't help but tinker.

Whenever the assassin ends its turn, any dazing, stunning, dominating, slow, immobilize, or restrained effect on it ends.

When bloodied, the assassin can score a critical hit with its quick cut or heavy cut attacks on a roll of 17-20.

Twin Cut; at will

Trigger: An enemy hits the assassin while flanking it.
Attack (free action): The assassin makes a Quick Cut against the triggering enemy.

Easier than it looks

What we have now is a very in-depth reflavoring of a Monster Vault solo but it doesn't take nearly this much work to reflavor on the fly in your own game. Most of what we've done above can be done in your head during the game without any notes or even a lot of planning. Simply pick a creature of the level, role, and type (solo, elite, normal, minion), and reflavor it to fit anywhere in your game. Reflavoring existing monsters is one of the best ways to make your game unique, challenging, and fun.