The same thing occurs in Tomb of Annihilation when the characters come into contact with Valindra Shadowmantle, a lich in service to Szass Tam of the Red Wizards of Thay. The characters are likely around level six at this point.

Putting the characters in the presence of powerful villains is common in a lot of adventures, published or not. Sometimes it's fun for the characters to actually face the true villain of the adventure early on, such as meeting Strahd in the beginning of Curse of Strahd. Other times, like when Demogorgon steps out of the Dark Lake in Out of the Abyss it serves as a powerful backdrop for the plot of the adventure.

There's a big problem with scenes like this, though: facing insurmountable foes removes player agency. 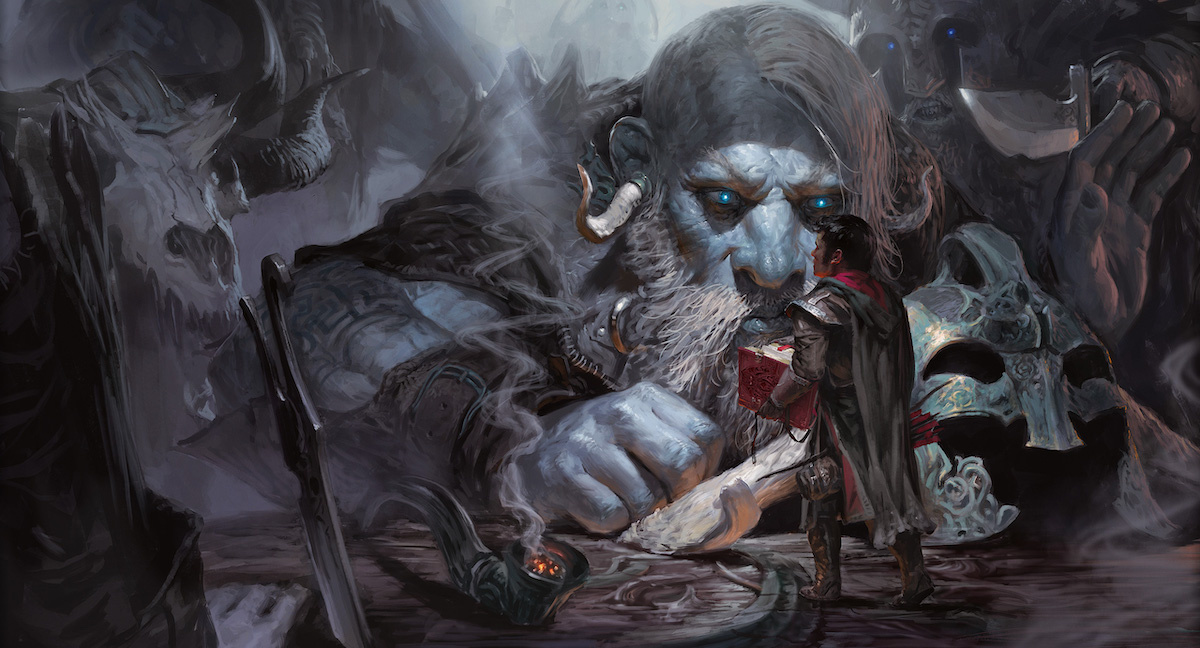 (Cover to Volo's Guide to Monsters by Tyler Jacobson)

However they got there, when the characters face these foes and combat is off the table, the players might find themselves limited in the options from which they can choose. Sure, they can negotiate, but how good is the negotiation when one side can completely obliterate the other? How well has it worked out for the goblin the characters captured after slaughtering fifteen of its friends? That goblin doesn't have a lot of options to choose from.

Neither do the characters when facing an adult blue dragon at level 1.

So we come to an easy high-level piece of advice for situations like this: give the players options when facing insurmountable foes. If the story has worked itself into a position where the characters face an insurmountable foe, it's up to us DMs to make the options clear. It's up to us to return agency to the characters so they can actually make some meaningful choices.

Perhaps the villains have a weakness the characters are aware of. For example, what if the characters know about a lich's phylactery or a vampire's coffin. Maybe they even have control of it, putting the two opposing sides on more even ground.

We can also expand the options for the characters in a few other ways. Maybe the characters learn of a traitor in the enemy's forces that they can exploit. Maybe they learn how they can steal what they want instead of needing to negotiate for it directly. Maybe they learn that, buried deep within that ancient black obelisk, is a nalfeshnee just waiting to burst forth. Should something go terribly wrong, a good crack on the obelisk will complicate things for the villains.

So what sort of angles might the characters have when facing an insurmountable foe? Here are some general examples:

If a villain is on the horizon in our games; if we think they're going to come into play and there will be a stand-off between the insurmountable villain and the characters; it helps if we lay out perhaps three angles the characters can capitalize on when that confrontation occurs.

Bending the Story to Our Will

When we're building out a D&D game from the story that unfolds, sometimes these situations appear and we don't have a good or easy approach to give that agency back. If we're letting scenes unfold how they unfold, we might not have any options prepared ahead of time. It might turn out, as the course of events takes place, that the characters find themselves face to face with an insurmountable foe.

In cases like these, we have to remember that fun comes first, even before staying true to the continuity of a story. Stephen King fully expected to kill off Paul Sheldon in Misery until he realized that no one wants to read a novel only to have the main character killed off at the end. He must not have read No Country for Old Men yet (spoilers!). In any case, when it comes to our D&D game, no one will care if you stay true to the direction of the story if it's not fun for the players.

Therefore, moments like this give us license to alter the world. This is a good time to stop for a minute and think about how we can give agency back to the players when they face an insurmountable foe. We can manipulate the world to give them an edge. We can reveal a weakness. We can reveal a nearby doomsday device. We can have the villain realize that an ally of the characters is too important to anger. This is one of those times where tweaking the reality of the story is ok because we're doing it specifically to make the game more fun. Like adding hit points to a boss monster that's dying too fast we can bend space and time for the sake of the fun of the game.

If we're used to previous versions of Dungeons & Dragons, particularly third and fourth editions; we're probably used to focusing on balanced combat encounters. It is hard for us to break away from clear encounter-focused D&D adventures and letting the story take us in directions we weren't used to. As we get used to letting the story go where it goes, situations like facing an insurmountable foe can become more likely.

As hard as it is for us to change our thought process when running fifth edition D&D games, so to might it be hard for our players. When the characters end up facing an insurmountable foe, it's up to us to telegraph the danger. We have to let them know that we don't expect they'll go toe to toe with a villain like this and kill it. They might very well die if they try. It's possible, even likely, that players will think they're getting manipulated. They'll think that it isn't fair that they're facing such powerful monsters. If there isn't a good story reason why they're facing such a foe, they might be right. The adult blue dragon in the first chapter of Hoard of the Dragon Queen felt like this to me. Why would an adult dragon need to go poke around at a village? Why not leave that to the cultists?

When the story does support a confrontation against an insurmountable foe, we have to make it clear to the players that the foe is indeed insurmountable and also telegraph the other options available to them. If they're a combat focused group of players, we may really need to make it clear what other angles they have available. If we took combat away as an option, what was that option replaced with? If the answer is nothing, we've probably railroaded the story too much. The characters really don't have a choice other than 100% capitulation. That's not our job. Our job is always to put fun choices in front of the players.