Noticing, studying, and disarming traps is a common activity in Dungeons & Dragons and yet it can be difficult to understand exactly how it works. Likewise, depending on the situation, it can be difficult for us DMs to understand how best to describe what is happening in a way that still fits the fantastic tales of high adventure we want to share. Today we're going to look at two things: the tricky workflow for detecting, investigating, and disarming traps, and how we can let these situations flow into the rest of our story. 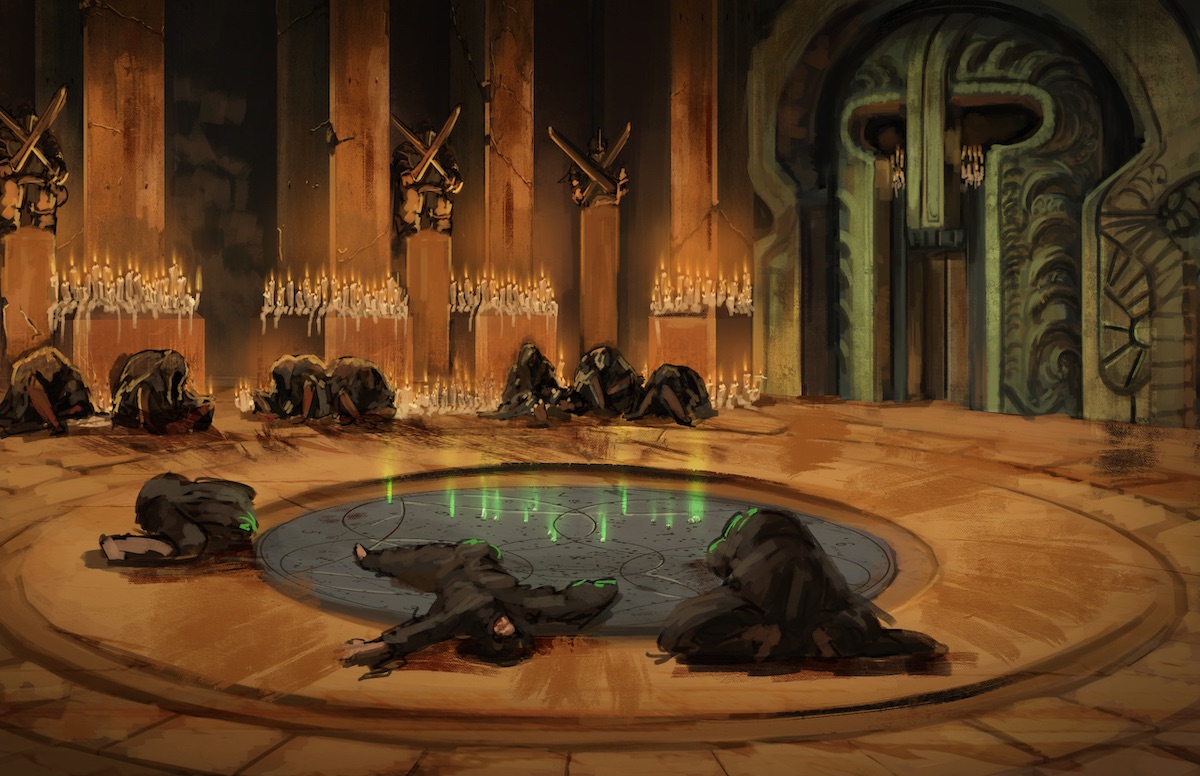 The Mechanical Flow of Trap Detection

The most useful description for trap detection appears in chapter 5 of the Dungeon Master's Guide on page 120 and 121 under the heading "Detecting and Disabling a Trap". If you're confused about how the flow of trap detection works, start with that section to understand the rules-as-written.

In short (and you really should read the DMG description if you haven't already) traps are first perceived (or not...), then investigated, and then disarmed.

Perceiving a trap. Perceiving a trap requires, you guessed it, perception. When a trap is perceived, the danger of the trap is noticed. According to the DMG, this means the character succeeds in noticing the trap. What they perceive depends on the situation. See What Does Passive Perception Show You? for more details on this. What they perceive depends heavily on the fiction of the game and situation in the world. Perception can either be an active roll or a passive check. Jeremy Crawford blew this topic wide open with his discussion on passive perception during a Sage Advice episode (jump to the 22 minute mark to hear about passive Perception).

Investigating a trap. Once a character notices a trap, they might need to investigate the trap to understand how it works and how to disarm it. This investigation may either take place by the player describing how they mess with the trap or might take place by rolling an Intelligence (Investigation) check. An Intelligence (Arcana) check can be used to detect and investigate magical traps as well as disarm them. The type of trap and its setup could determine how this investigation takes place and how well it works.

Disarming a trap. Disarming a trap can require a few different potential skills. Like investigation, a character might be able to foil a trap without rolling any check at all. Holding a shield up in front of a chest that fires off poison darts might be enough on its own that no check needs to be made. Other traps might require a Dexterity check using thieves' tools if they are mechanical or an Intelligence (Arcana) check if they are magical. Other abilities can likewise foil a trap such as Dispel Magic.

This all seems rather straight forward but there are some edge cases that can complicate things. First of all, how much can be detected with passive Perception? As Crawford mentions, and this RPG Stack Exchange thread clarifies, passive Perception acts as a lower floor for a Perception check. It's always on, even if a character attempts an active Wisdom (Perception) check. It's the minimum of what they see. The DMG clearly says that you can compare the DC to detect the trap with each character's passive Wisdom (Perception) score to determine whether anyone in the party notices the trap in passing. Sometimes characters have very high passive Perception scores. The observant feat can boost it even higher. Obviously we don't want to negate this bonus. Players chose these options in particular for their characters.

But we can change what they see with passive Perception. This depends on the story and the situation. A character with a passive Perception higher than the DC of a trap notices danger ahead, but they might not know what danger they see. This requires its own Intelligence (Investigation) check to learn more about what is going on with the trap. Like passive Perception, a passive Investigation likely acts as a lower floor for investigating the mechanics of traps. Again, we decide what information comes up from this. Yes, you see danger ahead (high passive Perception). Yes, you see that there are deep grooves surrounding some of the tiles in the floor ahead and believe they move or can be moved (high passive Investigation). That doesn't tell you exactly what is going on but smart characters (and smart players) will test it out and see. Maybe they back up and toss something heavy on the tile. Maybe they duck out of the way and press a torch down on it only to see a poisoned barbed dart hit the torch. They still learn things by actually investigating.

One note about passive Perception I missed until DM David brought it up in his excellent article on group ability checks — lighting matters a lot. Dim lighting for those without darkvision drops passive Perception by five. The same is true for total darkness and those with darkvision. Keeping track of the lighting tells you how easily the characters can actually perceive. We're not monsters, though. We should likely mention this difficulty before the characters start wandering into pit traps. "The total darkness in this chamber makes it difficult to see well, even for those of you with darkvision." Give them the reminder and they'll likely need to fire up some light to avoid the penalty to their passive Perception.

Maybe you want to take this a different way and use those passive scores to smooth out the description of the story. In the adventure Isle of the Abbey in the adventure hardcover book Ghosts of Saltmarsh, there is a hallway filled with traps known as the "Winding Way". Many of the traps can be detected with a passive Perception of 16; some need as high as 19. There are enough of these traps that, instead of going through the full flow of trap detection stages mentioned above, we can just describe what they see:

"As you travel through the Winding Way you notice and avoid dozens of traps designed to thwart run-of-the-mill tomb robbers; but you are no casual tomb robber. Poisoned darts drip from hidden shafts. Large overhead rocks threaten to smash intruders into thin pink paste. Illusionary floors sit atop fields of poisoned spears upon which are impaled the skulls of those less perceptive than you. You journey through the Winding Way noting these deadly traps as you make your way to the vaults of the dark priests."

Obviously you need not read something like that aloud but you can describe how the characters avoid these traps without going through every step of the process. You might mention that other more cunning traps may not be as easily discovered. The pit traps, for example, require a DC 19 passive Perception to detect which a group of characters simply may not possess.

Working With the Players, Not Against Them

Traps are one of those areas where antagonistic DMs clearly run a different kind of game than character-focused DM. Antagonistic DMs take a "you deserve what you get" approach, sitting back and giving only whatever information they have to based on the questions the players ask and the rolls of their characters. Instead, we can work with the players. Yes, we know where the traps are but there is a huge translation problem continually occurring when we run our D&D games. We're describing places that don't actually exist from images on our heads and hoping that the same images transfer intact into the heads of the players.

In the Elements of Style (a mandatory read for writers in my opinion), EB White says "most readers are in trouble about half the time." The same is true for players at our game. With any description we describe, our players are probably not understanding it about half the time. We need to work with our players, clarifying our descriptions, and giving them material to work with.

The characters in our D&D game, for the most part, are experienced adventurers. They're not going to do stupid things. We can assume that, by the time they've been through a few dungeons, they know how to stay out of the way of explosive runes when someone is trying to disarm them. They know how to duck behind a corner so as not to be in the path of poisoned darts.

We should assume that the characters are seasoned adventurers, not idiots, even if our players aren't fully grasping what is going on or spending a bit too much time on their phones. Find other ways to bring them into the game than sticking poisoned darts into the faces of their characters.

Another Tool for Tales of High Adventure

The whole flow of traps and trap detection, like all elements of our D&D games, is here to help us share a story. Traps are pieces of the world, a moment of stress and resolve, that fits in with the rest of the tales we share. It's a careful balance to ensure tension and resolution don't turn into frustration, tedium, or boredom. When we understand how traps fit into our story and keep the flow of trap detection at the right pace, we can keep the energy high and put traps in their rightful place as sinister agents of the stories we share.