A Framework for One-on-One D&D Games: Sherlock Holmes and Watson

To see some one-on-one D&D in action, watch Enrique Bertran and I play through Dragon of Icespire Peak one-on-one. The adventures of Barundar and Bing were great fun to play and taught me a whole lot about running one-on-one D&D.

More recently, while stuck at home during the pandemic, my wife and I have been playing D&D one-on-one and we've really enjoyed it. Playing D&D with someone you live with is a whole different kind of game. Instead of sitting down at a table for three to four hours in one session, you can break the game up into pieces and play out each piece in its own separate and shorter session. You can even play some of the sessions in different environments, such as while taking a walk or preparing dinner.

This has resulted in a different framework for D&D, with different phases for the different kinds of scenes taking place. Because this is a pick-up-and-go game, it's also different than a fully fleshed out campaign. Each session can be its own focused quest, maybe even from a job board similar to the one in Dragon of Icespire Peak from the D&D Essentials Kit. 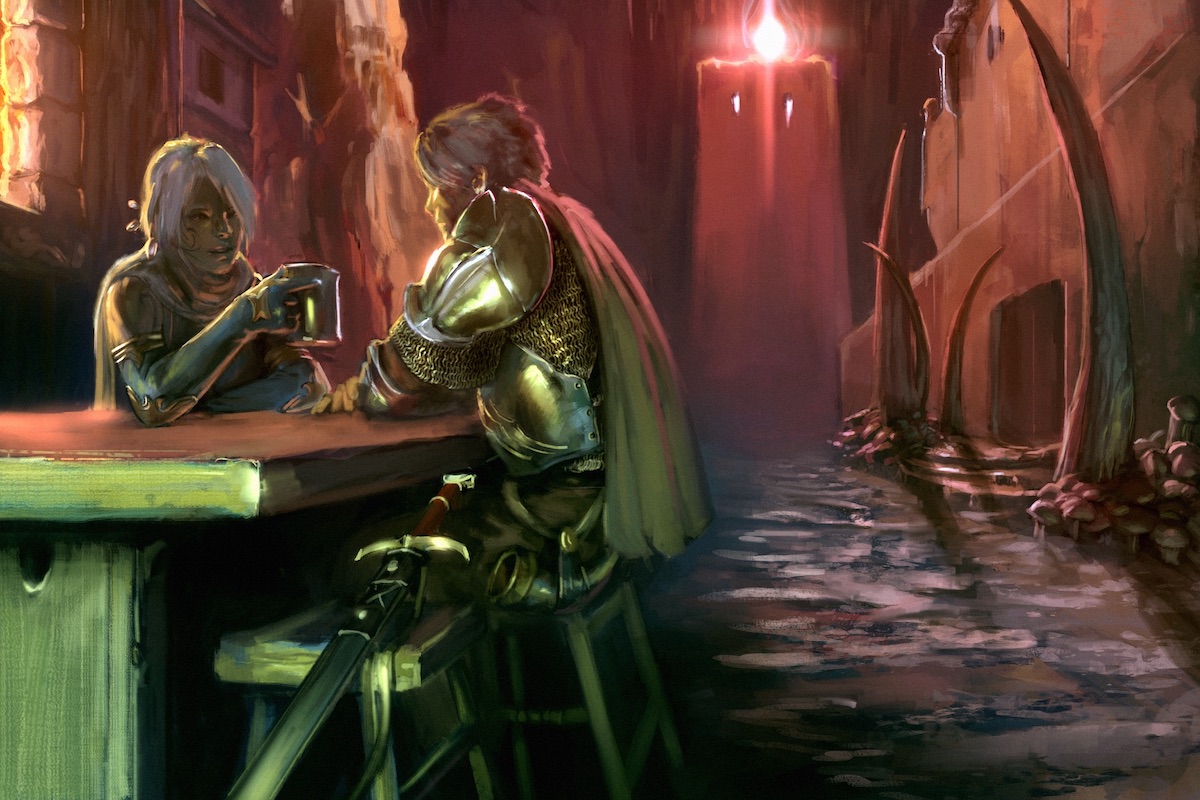 Today we're going go talk about this framework for one-on-one D&D including adventure generation and the phases of play taking place.

Now let's look at the details of this framework for one-on-one play.

This style of one-on-one play works well for a Sherlock Holmes and Watson style game in which clients come to the characters with jobs, the main character chooses the job, and then the character and sidekick go on the job itself. Sherlock is clearly the player character while Watson is the sidekick character mechanically played by the player but roleplayed by the dungeon master. The characters can have their own home and headquarters where they meet with prospective clients instead of continually hanging around a job board but you can change how this partnership works in a lot of ways.

The D&D Essentials Kit includes rules for sidekicks but you can also have the player roll up two full characters, designating one of them as their main character and the other as the sidekick. The Dungeon Master's Guide talks about this in chapter 4 under NPC Party Members.

As the DM, we begin by generating three potential jobs. We can use tables from chapters 3 and 5 from the Dungeon Master's Guide to select adventure goals, patron NPCs, villains, dungeon locations and origins, and other details. We can also mix in larger faction tables for our particular game world such as this 1d100 Factions of Eberron to tailor things closer to the game world in which you play.

We need prepare nothing more than three short job descriptions; just enough to give the player an idea what the job entails. We prepare three such jobs this way and write them down in preparation for our first gameplay session.

We now come to our first gameplay session, choosing a job. This session can be played anywhere in about fifteen minutes. The DM should have a list of the jobs somewhere. A 3x5 card or a list on our phone works just fine.

For this phase, the DM roleplays the sidekick, "Watson", and the player roleplays their character, "Sherlock". We assume the sidekick is responsible for meeting with clients around the town, city, or other spark of civilization in which the characters spend their time. The sidekick comes back to their headquarters and describes the three jobs to the character. The main character, roleplayed by the player, then chooses the job. Next up is meeting the client.

Prep Session 2: Filling out the Job

We now know which job we need to prepare. We don't have to prep the whole adventure at this point. We don't know what will come from the meeting between the main character and the patron and we should stay flexible. Instead, we expand our one or two sentence job description, particularly in filling out the details of the patron NPC. Who are they? What do they really want? We can use tables from the Dungeon Master's Guide to generate details about our patron NPC or use the Donjon random NPC generator to fill them out as well. Again, we can add in campaign-specific factions to add some world richness to the characters.

This is another roleplay session taking about 15 to 30 minutes. In this scene, the characters interview the patron, asking them about the job and learning more about what is entailed. Our prep for this session hopefully helps us answer these questions. Some rolls might take place here, particularly Intelligence (Insight) checks, and maybe some spellcasting like zone of truth. We can still play this session just about anywhere as long as the player has access to their character sheets and can roll some dice. The D&D Beyond mobile website can help here with both.

At this point our player has chosen a mission and understands the job. Now we actually prep the session. We can go through the eight steps from Return of the Lazy Dungeon Master and fill out the adventure. We can grab a map from Dysonlogos, fill in some details using the dungeon chamber tables from appendix A of the Dungeon Master's Guide, fill it in with some appropriate monsters, falling back to the random monster tables in Xanathar's Guide to Everything if we choose. For these one-on-one sessions, we don't have to go too crazy. Usually, a few rooms with some interesting secrets to uncover and a handful of monsters to fight is enough. We'll want to pay special attention to balance encounters for one-on-one play so we don't overdo it.

Finally, we actually run the main session for our adventure. This might take an hour or two depending on how big a dungeon you build. I've found four or five rooms with two or three combat encounters is enough. We can, if we want, include a travel scene as the characters go to the location or we might handwave it and start them at the beginning of the location and go from there. It's up to you.

A Different Way to Play D&D

Because we're playing D&D with just one player and one DM, we don't have to hang on to the model we use when playing with a full group. If we happen to live with the person we're playing with, we can drop in a quick scene from our game whenever we can fit it into our schedule. Playing together as a couple means sharing a world all our own and visiting it whenever we want. It's a great way to play D&D.