A while back I asked newer DMs on Twitter to describe the hard parts they encountered when running running D&D games. I got back a lot of interesting responses many of which focused on learning the rules, finding players, how to prepare for a game, and learning how to improvise. A few people brought up the difficulty in gaining the confidence to run D&D games. Since we've yet to cover this topic on Sly Flourish, I thought we would do so now.

Confidence is a hard to muster in many situations but it can be particularly hard when running Dungeons & Dragons games. We're already not necessarily confident creatures but when running a game of high fantasy in front of our friends, it can feel like we're in a room full of adults playing make-believe (which is, of course, exactly what we're doing). All our lives we're pushed to act like adults. Its hard to be confident and grab on to the imagination of a child again.

Yet DMs break past these confidence barriers and run some fantastic games every day. Today we're going to offer some tips and tricks to help muster up the confidence required to run some great D&D games. 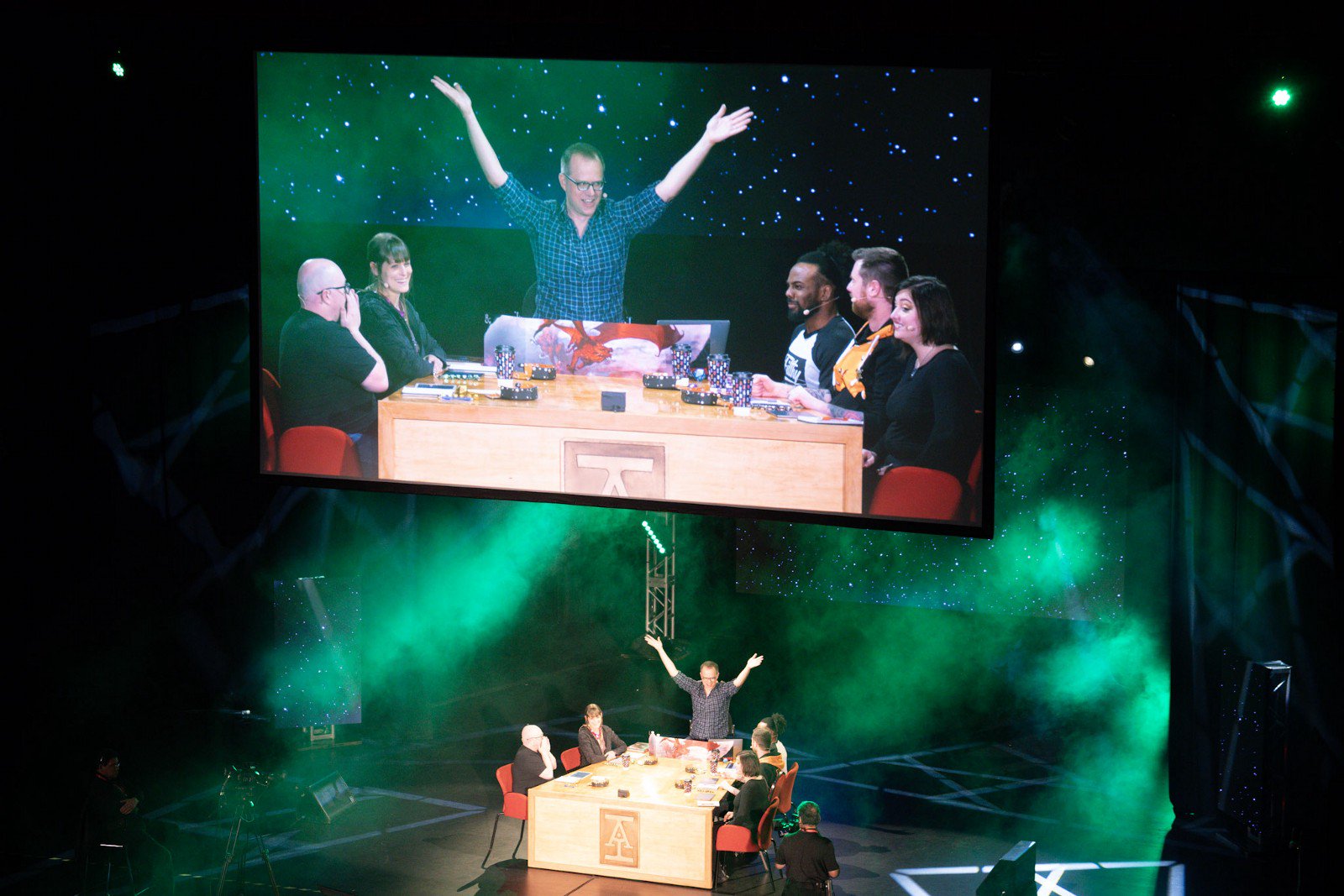 How do DMs Get the Confidence to Run Games?

Much like the question on the hard parts of running D&D games, I took to Twitter to ask how DMs got the confidence up to run D&D games. I got more than two hundred responses to this question. I took these results and categorized them into a handful of common themes. The top results included the following:

There were many other answers as well but those above got mentioned repeatedly, with the top two getting nearly five times as many responses as others.

We're not going to focus on the results above in the rest of this article but we will use them to help guide our discussion on how DMs might get the confidence they need to run great D&D games.

Surround Yourself with Allies

D&D works when everyone around the table trusts one another. This means, first and foremost, bringing the right people to the table that you trust and that want to enjoy a fun game. Assuming that you have the right people at the table, your next goal is to build an environment of trust by removing our competitive nature from the game. Everyone at our D&D table has the same goal—to witness a great story. Focusing on the story instead of worrying continually about challenge and mechanics is a good way to break down the walls. Enjoy the successes of the characters, not the monsters. Let players narrate parts of the story as it plays out. Say yes.

If we have surrounded ourselves with people supportive of our time in the DM's seat and we build an environment focused on collaborative storytelling, we'll get the support we'll need to feel confident as we run the game.

Above all, everyone we bring to the table is there to have a good time. We all want to get together and play games with our friends. Our players aren't here to make fun of us or pick holes in our understanding of the rules. They want to share a story together as people have done for tens of thousands of years. There is little greater joy in our lives beyond sharing stories with some friends and a handful of dice.

Fake It Until You Make It

Going all the way back to Aristotle, the idea that to be virtuous, we must act virtuous works just as well with the confidence we need to run our D&D games. We might not feel confident, but if we did, what would that look like? How would we act then? What if we pretended to be confident? This essentially has us diving into our games with both feet, waving our arms and trying out our silly voices even if we totally suck at them. Who cares?

I found the final sentence in the Wikipedia page on this topic particularly interesting:

In the 1920s, Alfred Adler, a disciple of Sigmund Freud, developed a therapeutic technique that he called "acting as if". This strategy gave his clients an opportunity to practice alternatives to dysfunctional behaviors. Adler's method is still used today and is often described as "role play".

Holy shit! Role playing! That's what we're trying to do already! So maybe we're nesting our roleplaying a bit, first roleplaying that we're actually fully competent and confident DMs who then roleplay the NPCs, villains, and monsters in our game. Every layer of our roleplaying, however, buries our self doubt a little more.

Author Steven Pressfield wrote a book about writing called The War of Art. In it he describes "The Resistance" as anything, real or imaginary, that gets in the way of creating art. DMing is one such form of art and the Resistance continually gets us to doubt ourselves and our ability to run a good game. If we can see this shadowy demon for what it is, we can recognize when it's sinking its claws into us and realize that it is simply getting in the way of us running great games.

When we hear voices in our head saying things like "it's too hard" or "I'm not good enough" or "I'll never be Matt Mercer", that's the voice of the Resistance and it's there to always keep us from making art. Put it aside, run a game, and then run another one.

Learn from the Best

Many people worked up the confidence to run D&D games by watching excellent dungeon masters run their own games online. This is a relatively new way to learn about this hobby, one we've only had for the past few years in the past few decades. Yet it is also likely responsible for doubling the amount of people playing D&D.

In particular, the Critical Role series by Matt Mercer and Dice, Camera, Action by Chris Perkins are excellent examples of D&D run by masterful DMs. The D&D advice videos by Matt Colville also come up often as sources for DM advice and as examples to help new DMs get into the seat. Even for veteran DMs, watching other DMs practice the craft can teach us a lot about how we might better run our own games. Will our style mimic these DMs? No. Will our games look like these? Maybe not. Can we learn from them? Hells yes.

Grab On to the Story

Losing ourselves in the fiction is an excellent way to forget about the stress of running a game. Many DMs said that they began DMing because they had stories to share. When we lose ourselves in the stories, when we go there, we'll forget how nervous we are and just run with it. When DMing goes well, we're in the flow. We lose track of time. We're fully engaged with the game. I can't speak for everyone but when I'm running a good D&D game, there isn't any other place I want to be.

Thinking Clinically About Our Games

Sometimes our games don't go well. Maybe people didn't have such a good time. Maybe we didn't have such a good time. It's easy to fall into despair, thinking we're horrible DMs and taking ourselves out of the chair. Instead, we can take a step back, look at the details of the game, and work on the specifics. Maybe we didn't suck as bad as we thought but we mis-matched the expectations we had with those of the players. Maybe we got too wound up in a battle and shut down a player's idea when we should have let it work.

Likewise, when we're playing in games, we can look at what is working well and what is going poorly. It's probably easier to do the latter. When games go well we're not likely thinking about why, we're just enjoying it. The tips and tricks we pick up from both good and bad games can help us polish our own.

We can learn from all of these experiences. If we see the path of DMing as a continual lifelong journey of learning and discovery, not a state we're going to one-day find ourselves in, these speed bumps won't turn into brick walls. We can take feedback one piece at a time and make our next game a little better than the previous.

Step back from the emotions we feel, study them, study the situation, and make small changes to your game.

Watch, Learn, and Do

When we look at what has helped DMs gain the confidence to run games along with the sorts of things that help people build confidence in all aspects of life, we can come to some simple advice. Yet many times the best advice (eat less, exercise more) is easier said than done. Still, when we focus on it and remember where it came from, such simple advice can sometimes push us in the right direction.

Watch people play D&D. Learn from other DMs. Think about their advice. Watch them run games. And then do it. Run games. Act as if. Grab on to the story and the fiction of the game. Become a kid again. Run some D&D.