Last week I discussed the advantages of a level 1 to 10 campaign but one thing such a campaign lacks is the feeling of facing truly powerful and devastating enemies. The Neverwinter Campaign Sourcebook shows good examples of powerful villains that give a heroic tier party a great sense of accomplishment. Today begins a new series of "Heroic Tier Bosses", powerful villains designed for heroic-tier PCs that still have an epic feel to them. Imagine all the fun of facing balors and demi-liches without the power creep of a level 26 game.

We're going to begin this series looking at an old friend, Graz'zt. An original creation of Gygax, this demon prince has graced D&D since the days of the 1st edition. Today we're going to design a level 13 elite Aspect of Graz'zt that gives the old-school feeling of this powerful villain for heroi-tier PCs.

Let's get right into the stat block. 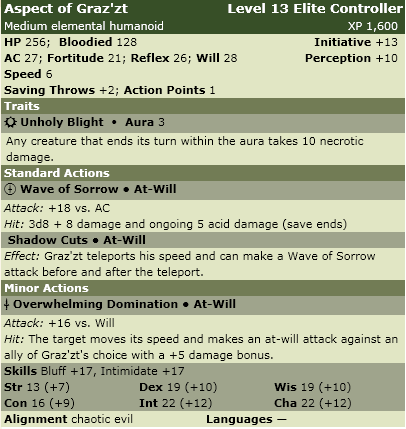 As you can see, we tried to build Graz'zt with lots of flavor in just a few powers. Like his older and more powerful versions he has a lot of teleportation and slashing with the acidic Wave of Sorrow. His dominating nature also comes through with a power that does not steal actions from PCs but still pushes them to attack one another.

The Aspect of Graz'zt may be just the thing to make your heroic-tier level 8 to 10 group feel like they just faced a true demon prince.