In a previous article, we looked at how to place Blackclaw Mountain, the primary location in Fantastic Adventures, Ruins of the Grendleroot, into Avernus, to expand the hardback adventure Descent into Avernus. Today we're going to pull up the mountain and drop it in another world entirely, the world of Eberron. How can we put this limitless mountain into the lands of Argonnessen, Khorvaire, Sarlona, or Xen'drik? Let's take a look. 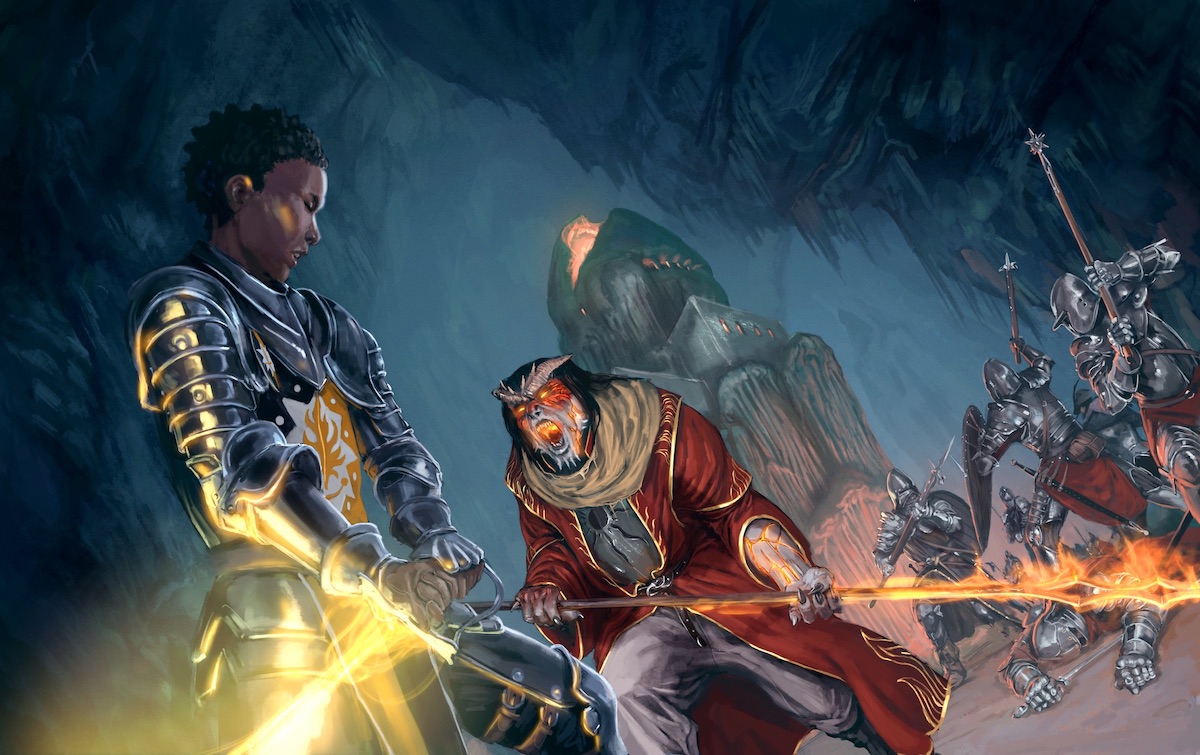 When we look at the material in Ruins of the Grendleroot we can identify the following areas where reskinning helps situate it in an existing game world. These include:

For a quick reference, here's one way you might reskin Ruins of the Grendleroot for Eberron:

The rest of this article dives deeper into these ideas and offers alternate paths you may make when reskinning Ruins of the Grendleroot for Eberron.

The Origin of the Grendleroot

The origin of the Grendleroot is one of the main elements that root Blackclaw Mountain in the world of Eberron (pun intended). Perhaps the Grendleroot is a living spell gone awry—a continually growing parasitic casting of wall of thorns or spike growth. Perhaps it is a piece of Khyber, the dark progenitor dragon who killed Siberys and formed the dragonshards. Perhaps it is the will of Xoriat, the plane of madness that has grown like cancer in the depths of Eberron.

It may even be part of the weapon or an aftereffect of the Mourning, the cataclysmic event that destroyed an entire nation. In this case, the Grendleroot wouldn't be particularly old; only a decade or so, which will change your timeline.

Of these ideas, the idea of a shard of Khyber piercing into the plane of Xoriat works well with the theme of the Grendleroot. The Black Sun the Grendleroot calls out to may be a particularly powerful daelkyr (see the bestiary in Eberron, Rising of the Last War for details).

Deepdelver's Enclave can be kept mostly as-is. Explorers from all over the lands might meet here to explore the strange depths of this mountain. House Tharashk might be the custodians of the enclave, as explorers and hunters. The Finders Guild of House Tharashk engages in dragonshard prospecting, a good match for the relic hunting found in Ruins of the Grendleroot.

The alien ways of the underworld of Khyber allow it to connect to all sorts of places across Eberron. Thus Deepdelver's Enclave could have explorers from many distant lands. This fits well with the melting-pot intention of Deepdelver's Enclave. Everyone is welcome and many diverse faces can be found there living in harmony.

The Magocracy of the Black Star

The magocracy might instead be reskinned as powerful leaders of the cult of the Dragon Below. This works well if you choose the Grendleroot to be an ancient shard of Khyber.

The Order of the White Sun

The Remaining History of the Mountain

Connecting Blackclaw Mountain to the deepest depths of Khyber lets you draw on histories from all over Eberron.

Much of the rest of the history of Blackclaw Mountain can be tied to other elements of Eberron's history. As part of Khyber, Blackclaw Mountain can have strange underworld connections to any part of the world and thus their histories. The arcane giants of Xen'drik fit in well as the strange glyph titans in Grendleroot. The aboleths can be easily replaced with the mind flayers of Xoriat. There are many hooks in Grendleroot upon which to hang the history of Eberron.

As both Eberron and Grendleroot have their roots from the original ideas behind Dungeons & Dragons, There is little to change with the adventures themselves. Sprinkling in the dragonmarked houses, criminal syndicates, cults, fiends, and otherworld entities throughout the adventure can make it feel like a rich part of Eberron. The best thing you can do is dig deep into Eberron, Rising of the Last War and let its lore flow down throughout the caves and crevasses of Grendleroot while you run it.