Note, this article contains spoilers for Descent into Avernus.

Fantastic Adventures, Ruins of the Grendleroot, my book of ten 5th edition underground adventures, is designed to fit into any fantasy RPG world. Here's a quote from the book:

Blackclaw Mountain is designed to fit into just about any fantasy world, whether of your own design or part of a published campaign setting. The mountain can be a single peak in a large range, a lonely highland in a great plain, a pocket dimension, or a splinter between worlds. Drop Blackclaw Mountain into your world wherever it makes sense and won't disturb other parts of that world.

Blackclaw Mountain is also potentially infinite in its depth. All the locations and adventures in this book are set up within the mountain, and as a self-contained fantasy environment, the mountain can be expanded however you wish. You can add in borders marking the entrances to other worlds, tunnels to vast cities, and the lairs of monsters of any type and size. If it can be found underground, you can add it to Blackclaw.

The mountain is thus both a self-contained adventure location, easy to drop into any fantasy world, and an infinite portal opening up to a lifetime of stories. Use it as best fits the stories you and your players want to share. 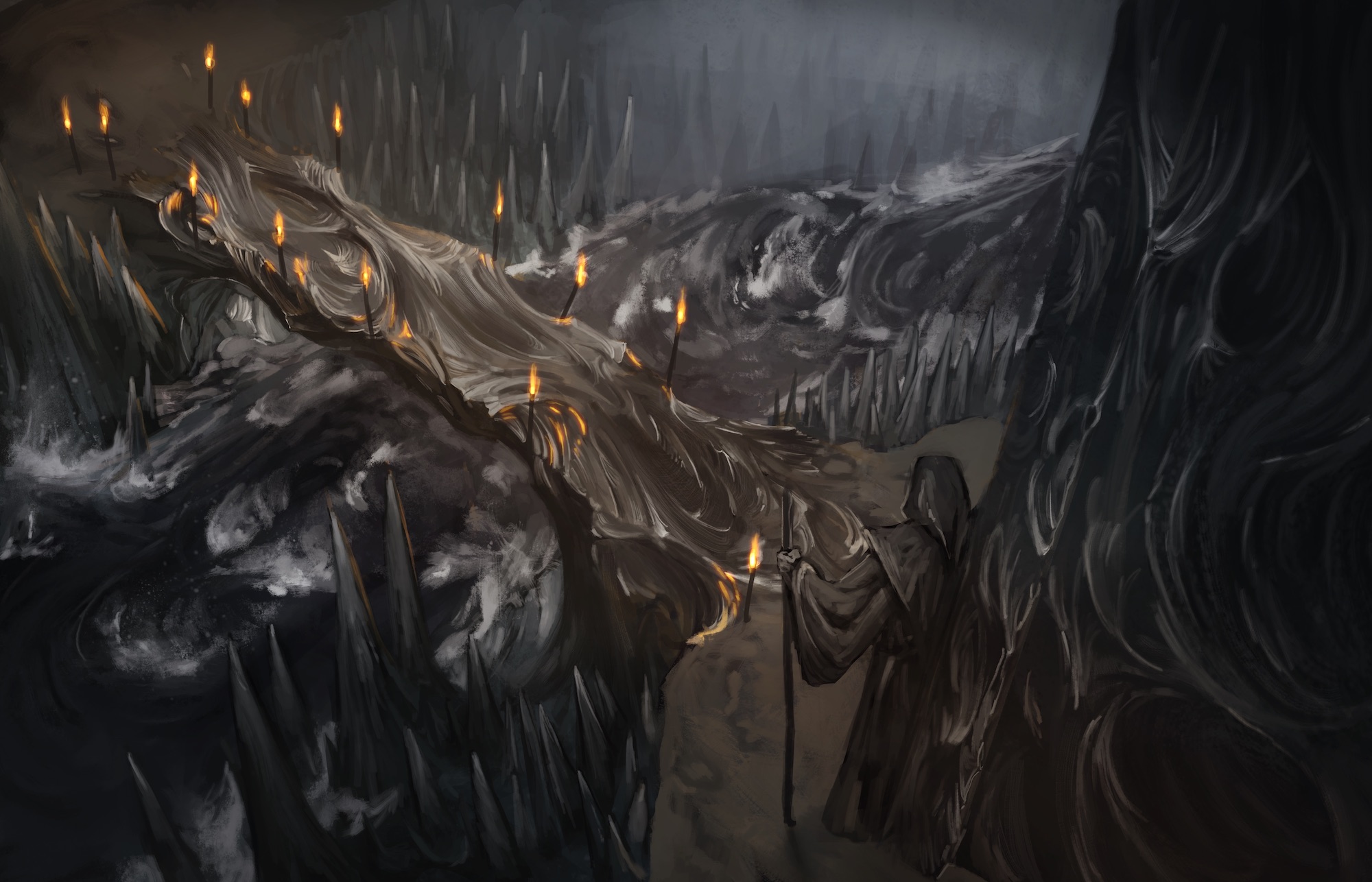 One of the Kickstarter backers of Ruins of the Grendleroot on Kickstarter asked how they could use Blackclaw Mountain in the D&D hardback adventure Descent into Avernus. This is a perfect exercise to show how flexible this mountain truly is.

As described, we can place Blackclaw Mountain just about anywhere in Avernus. It might appear as an obsidian mountain piercing out of the cracked hellish landscape. It might be part of an existing mountain range of charred rock in Avernus or an independent demonic spire piecing through the abyss and into this first layer of hell.

Blackclaw Mountain as an incursion between the Abyss and the Nine Hells puts it in a really interesting spot for our tales to come. Devils can't get rid of it and demons use the mountain as a passageway from the abyss into hell.

This pivot point can create great energy for those who can control it, and many powerful beings wish to do so. It's possible areas of Blackclaw, maybe even the city of Shadowreach itself, regularly switch hands between demons and devils. For those able to profit from the blood war, like the warlords in chapter 3 of Descent into Avernus, Blackclaw Mountain is a dangerous yet profitable location.

The Grendleroot as Demonic Incursion

The Grendleroot itself, the strange alien entity whose spires pierce through the caverns of Blackclaw, might be a demonic root, a sentient growth of the Abyss that pierced into Avernus. It may be the catalyst for the whole mountain itself and it continues to claw its way out into the hellish lands above. The Grendleroot might be the remains of a demon prince whose attempts to break through into hell from the Abyss transformed it into this sentient horror. It reaches still, though slowly, trying to claw its way free into the skies of the Abyss.

The Black Star, the entity the Grendleroot calls out to, may be a more powerful demonic presence; maybe even an elder evil from the Far Realm. It might be Tharizdun, the chained god, trapped in the lowest levels of the Abyss.

The History of Blackclaw Mountain in Avernus

The history contained in Ruins of the Grendleroot is designed to be as reskinnable as the mountain itself. We can do so here when we place the mountain in Avernus.

First, we can replace the Order of the White Sun, as described in chapter 2 of Ruins of the Grendleroot, with the Hellriders, the knights of Eltruel who followed Zariel into Avernus over a century ago. Zariel's fall works well as the moment the Hellriders abandoned Blackclaw Mountain and returned to Eltruel.

As for the Magocracy of the Black Star, these archmages might be left mostly intact but with a more fiendish connection to the lords and dukes of hell. Each of the archmages may be tied to one of the lords of hell formed into a loose alliance in the city of Shadowreach where they practiced their terrible magics supported by an entire city of the damned.

Other aspects of the history of Blackclaw Mountain can be likewise reskinned. The ancient red dragon Aravax Blackflame may instead be a demon prince who built their throne on this border between the Abyss and the Nine Hells defeated by the Magocracy.

The abolethic city described in the history of Blackclaw and found in the adventure Chuul might instead be the lair of sibriexes (see Mordenkainen's Tome of Foes). These ancient keepers of forbidden lore may fit well as the mysterious caretakers who captured the Grendleroot. In our Descent into Avernus mashup the sibriexes may replace both the aboleths and the caretakers in Ruins of the Grendleroot. They could be the creators of the Grendleroot itself, having used the twisted alien entity to tear its way across the planes.

Deepdelver's Enclave: A Protected Beacon of Hope in Hell

Deepdelver's Enclave is designed to be a shining beacon in the darkness and it can continue to be so even if that darkness lies beneath the surface of Avernus. Perhaps it is too small for the demons and devils to care. Perhaps it is a sanctuary between the warlords who rule over Avernus's surface. Perhaps some other power protects it. It seems quite likely that Ayaan of Veyr, a rakshasa merchant in the Enclave, might either know of or be part of the force that protects the enclave.

When the enclave does come under attack; as it often does in the beginning of many adventures and particularly in the adventure Fistful of Copper, we'll want to ensure that there's a logical reason for these protections to fall. Perhaps they are weakening for that time. Perhaps whoever keeps a protective eye on the Enclave has looked elsewhere for a short time. Whatever reason we create, we'll want to consider it up front and ensure it makes logical sense.

The melting pot nature of Deepdelver's Enclave fits well into Avernus. We can think of it like a miniature version of Sigil in which both demons and devils walk the streets but no violence breaks out. The residents of Deepdelver's Enclave simply find the profit of delving into the depths of Blackclaw Mountain too inviting to ignore.

As for the adventures themselves, you'll want to reskin them to fit the fiendish nature of the new realm in which Blackclaw Mountain sits. This might be as easy as reskinning some of the monsters into more fiendish varieties. Temple of the Forgotten God may show what Avernus was like when it was meant to tempt mortals into hell with grand visions of idealistic lands. A Fistful of Copper may use small attacking bands of smaller demons and devils instead of orcs and hobgoblins. Many of the rest of the adventures likely need only small tweaks to fit them into an Avernus campaign.

Setting Blackclaw Mountain in the Depths of Hell

If we can take Blackclaw Mountain and fit it into the depths of hell, there's likely no fantasy world into which it cannot fit. Drop it in the Mournland of Eberron or in the mountains of Greyhawk. Plop it into the Spine of the World in the Forgotten Realms or under the scorched lands of Dark Sun. Blackclaw Mountain is designed to be your world within a world wherever you decide to plant it.