This article offers tips for running chapter 3 from the D&D hardback adventure Descent into Avernus.

For other takes on running Descent into Avernus, see the following:

If you prefer this article in video form, take a look at my Running Avernus Chapter 3 Youtube Video.

Chapter 3 of Descent into Avernus is the big meat of this adventure and also takes the most work to wrangle into a great Avernus campaign. Lke the crawl through Chult in Tomb of Annihilation and the exploration of the Sword Coast in Storm King's Thunder, chapter 3 is what makes Descent into Avernus what my wife and I like to call a "yam-shaped adventure": narrow in the beginning and narrow at the end but wide in the middle.

Chapter 3 contains about 25 locations the characters might explore while traveling across the hellscape. As written, chapter 3 begins with the adventurers meeting Mad Maggie at Fort Knucklebone and then follows two potential paths towards the end of the adventure: the Path of Demons and the Path of Devils. This makes chapter 3 less flexible than the big exploration chapters in other published adventures. Some DMs, like Justin Alexander with his Avernus Alexandrian Remix, have worked to turn it into more of a pointcrawl exploration. In my own game, I've added a third path, one with some meaningful choices in it: the Path of the Hellriders. More on this in a minute. 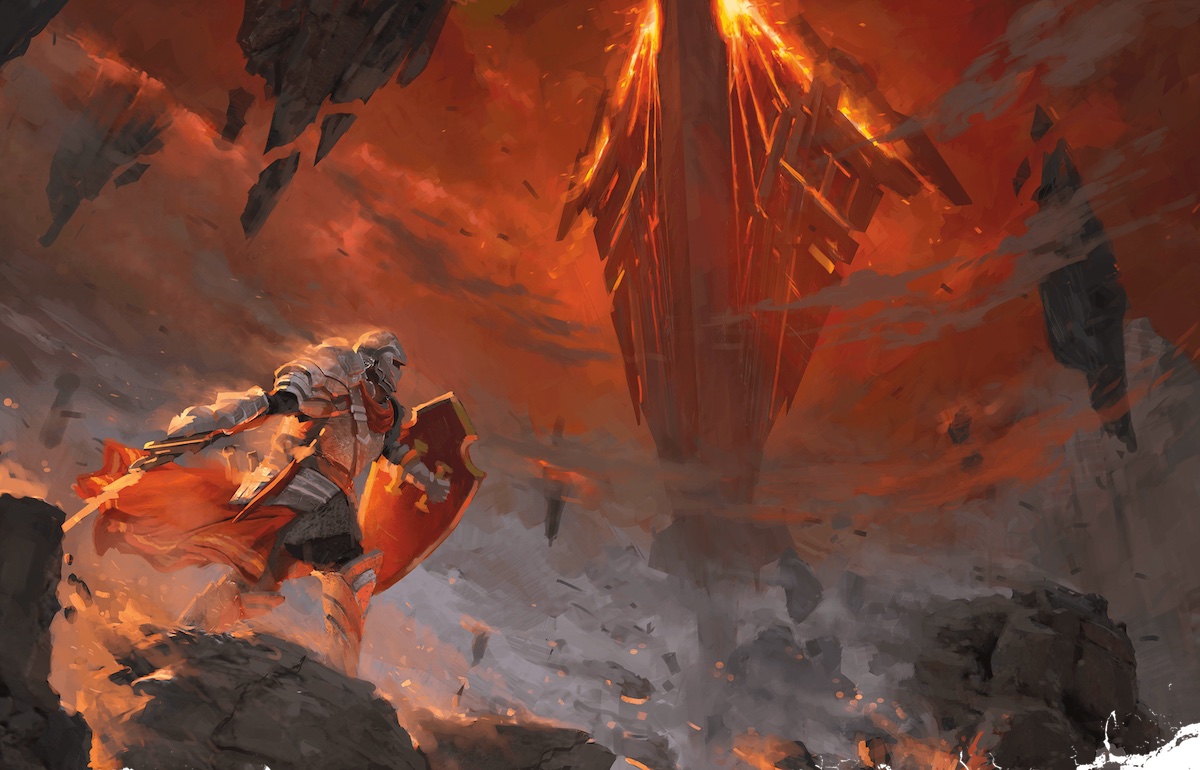 Theme of Descent into Avernus

As mentioned in previous articles on Descent into Avernus, my number one recommendation for this adventure is to tie the characters to Elturel, Reya Mantlemourn, and the Hellriders. In the beginning of the adventure, let them witness the fall of Elturel and ensuring their characters care about its return to Toril. Without this, the characters can lose their motivation for much of the adventure. Why go into hell to save a city you don't really care about?

This shift in theme away from the one in the adventure — the brooding conscripted hunters of cultists in Baldur's Gate — can result in big changes to the adventure in chapter 3. With this change in theme, the characters may not want to follow the paths laid out in the book. It's up to you to make new ones.

The Morality of Soul Coins

This thematic shift becomes clear when the characters received soul coins and realize they'd have to burn soul coins to power their infernal war machine. Think about what it means to destroy a soul permanently. It's way worse than murdering someone. Even if the soul is evil, destroying it forever is not a good act. Souls in D&D have a path they take, good or bad, and pulling one out of that path and destroying them forever is perhaps the worst act a mortal can commit. And we're doing it to move a car a few miles down the road.

In my Youtube video on Soul Coins I recommend an alternative approach to fuel war machines — demon ichor or demon essence. Demons have no souls. They're not reincarnated mortal beings like devils are. They're manifestations of chaos from the primordial sludge of the abyss. Turning them into fuel has no moral complications.

Now perhaps you and your group enjoys the moral complications of soul coins. If so, go with the Gods. If, however, your players want to continue with the theme of light in darkness and good versus evil, you can give them another option for driving around those cool war machines other than the permanent destruction of a mortal soul. Let them run on demon ichor.

All Roads Lead to the Bleeding Citadel

As big as it is, chapter 3 of Descent into Avernus has one main path running through it. Chapter 3 takes the characters from Elturel to the Bleeding Citadel. How they get there and what steps they need to take are up to you and eventually up to them. The book lays out a bunch of locations and two main paths, the Path of Demons and the Path of Devils, but you're free to break away from these paths and choose your own, as I did.

To do so, read through all of the locations in chapter 3 and make a list of locations that sound cool to you; places you're excited to run. Then tie the story and threads together between these locations to connect them from Elturel to the Bleeding Citadel.

You can also fill in your path with an interesting random Averus monuments or extend the whole area with Abyssal Incursion and Encounters in Avernus written by some of the original writers of Descent into Avernus.

Fort Knucklebone, the first stop in chapter 3, works well as written. Mad Maggie is a fun character and the jobs she puts the characters through can be a good time. Watch some Mad Max Fury Road for inspiration here. The war boys are a great model for the redcaps and madcaps surrounding Mad Maggie.

Near the end of this part of the chapter is when we lay out the first steps in the characters' quest to recover the Sword of Zariel and save Elturel. You decide what they learn from Lulu's dream and which paths become available for them to follow as they hunt down the Sword of Zariel in the Bleeding Citadel.

Path of the Hellriders

The Path of the Hellriders follows Zariel's generals. I rewrote some of the history of these generals to fit the theme I sought. These generals include:

The following outlines the clues the characters follow along the path of the Hellriders.

As the characters follow this path they may be drawn towards other alternatives as well. Krull, Arkhan's speaker, may tell the characters that Arkhan the Cruel wishes to talk to them. Arkhan offers to save Elturel if they recover a particular puzzlebox he cannot find. An ancient sibriex knows the location of the puzzlebox (choose a location for the characters to locate the puzzlebox) and the characters can recover it. Giving the puzzlebox to Arkhan lets him release Tiamat, trapped after her loss in Rise of Tiamat, back into Avernus at which point all hell breaks loose (pun intended). Tiamat, true to her word, breathes and destroy the chains binding Elturel, releasing it back into Toril.

Gargauth, the archdevil trapped in the Shield of the Hidden Lord, can play another important part in this adventure. Throughout their journeys the shield may influence the characters to seek Gargauth's release. Perhaps only two things could do this. First, it could be melted in Bel's Forge. If the characters traveled to that location for any given reason, the shield may either try to convince the character wielding the shield to throw it into Bel's molten fires or attempt to overtake the character and force them to. With Gargauth's release, more chaos ensues. Bel, subservient to Gargauth, would likely kneel to the being and join together to overthrow Zariel. The Sword of Zariel can also break the shield. Gargauth seeks an opportunity to force the wielder of the sword to smash against the shield, thus releasing the archdevil as well.

Filling Out the Crypt of the Hellriders

Unfortunately, one of the locations that works best for the path of the Hellrider, is also one of the most disappointing. The writeup for the Crypt of the Hellriders has fifteen keyed locations and only seven descriptions; offering repeated descriptions for many of the chambers. You'll want to fill out these rooms with your own details as the characters explore them. Here are a few suggested features of these otherwise empty or repeated room:

Adventuring in Avernus is almost all downward beats. It can be depressing, not just to the characters but to the players as well. How many festering blood-filled bogs, tasteless meals, and nightmare filled rests can the characters take? The Wandering Emporium offers an excellent opportunity to bring in an upward beat — a place protected from the horrors of Avernus where the characters can rest, recover, shop, and pick up rumors.

By this point, however, the characters may not trust it. So broken have they become by the horrors of Avernus that they won't trust a shining light in the darkness even when it does show up. They may want nothing to do with it. When Mahati drops a contract on them to eat and rest at the Infernal Rapture, they may decide not to sign it, ending their opportunity. Players hate contracts. They don't trust them, even when they're simple. Surely they're getting screwed.

If they choose to pass on the Emporium, be ready to drop another upward beat in the story for them. Remember, Avernus used to be a beautiful place filled with temptations. Some of these ruined places of beauty still exist; perhaps a ruined elven pavilion with a fountain of healing and respite beckon to them.

Traveling from Place to Place

As described, traveling through Avernus isn't like traveling through any real world. The world changes and shifts, elongates and contracts. For the characters to travel from place to place, they need some sort of guide — often a magical guide. Here are a few potential ways the characters can find direction in Avernus as they travel from place to place.

Building Your Own Adventure

As written, Descent into Avernus is a bit of a mess. While some may read it and find it to be a fun adventure focused on descending into darkness, others, myself included, find the theme and structure difficult to manage. Instead of looking at Descent into Avernus as a cohesive adventure, it works best to think of the adventure as a loose outline around a central theme and a toolbox of NPCs, locations, and encounters you can tie together into an adventure all your own.