Running Chapter 1 of Descent into Avernus

This article offers tips and tricks for running chapter 1 of the D&D hardback adventure Descent into Avernus and includes spoilers.

If you take nothing else from this article, heed these words: the biggest improvement you can make to your Descent into Avernus game is to ensure the characters are tied to Reya Mantlemourn, the Hellriders, and Eltruel from the beginning. Do so during your session zero and all of the motivations for the rest of the campaign flow right in. Your players will never state something like "why would we be the ones to go into hell?" or "why do we have to save Elturel?". When tied to Elturel and Reya, these motivations wire them into the whole rest of the campaign.

I covered this topic in-depth in Running Descent into Avernus: the Fall of Elturel but I believe it's worth stating again because of the huge impact it has when running this campaign. You can use this one-page Avernus session zero sheet to help get the characters connected to the adventure.

In today's article we'll look at some tips for making the most out of chapter 1 of Descent into Avernus. 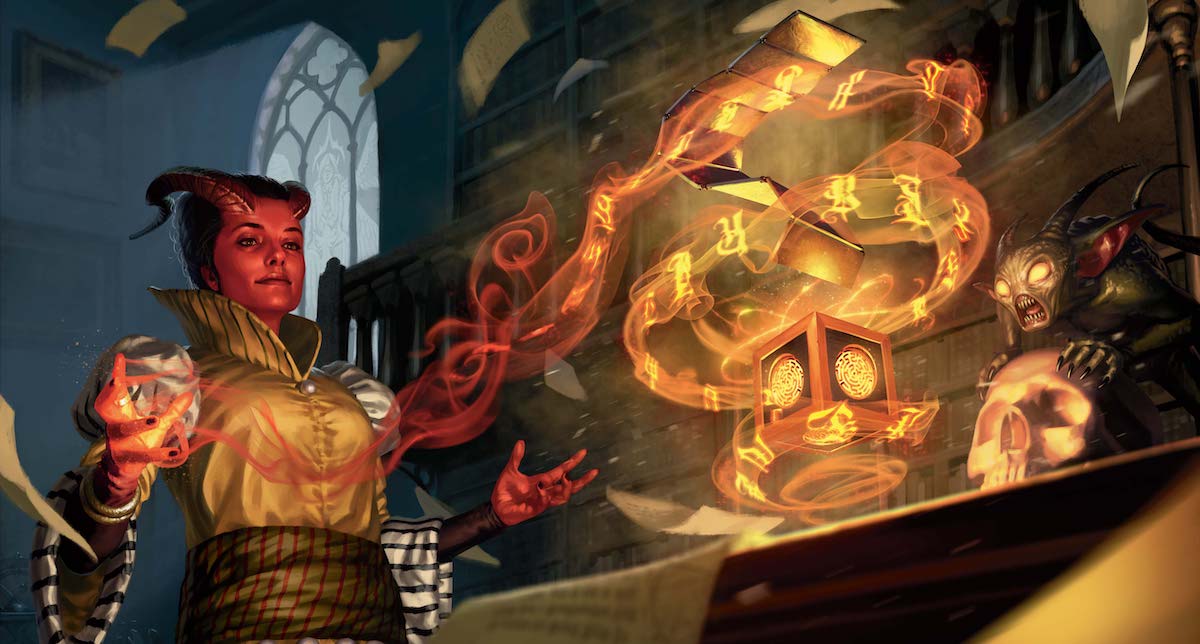 As written, Descent into Avernus begins when the Flaming Fist mercenaries recruit the characters to clear out the Cult of the Dead Three. Without their leader, High Duke Ulder Ravengard, the Flaming Fists are nearly out of control. They're brutal, threatening, unforgiving, and inconsequential to the plot.

Consider skipping the entire Flaming Fist angle to this chapter and instead have Reya Mantlemorn, the young refugee captain of the Hellriders, ask the characters to hunt down the Cult of the Dead Three. Reya is currently in hiding in the Elfsong Tavern since the disappearance of Elturel.

You can begin the first chapter with the characters meeting Reya Mantlemorn at the Elfsong Tavern along with her seedy contact, Tarina, who knows the hidden location of the Cult of the Dead Three.

Reya believes the Cult of the Dead Three is responsible for the destruction of Elturel and wants revenge. She's only partially right. The cult did help the Vanthampur family dig up the Shield of the Hidden Lord and hide Thavius Kreeg who gave up Elturel to Zariel. But Eltrurel isn't destroyed and the cult wasn't directly responsible, Kreeg was.

The characters can learn of these things as they hunt down the cult underneath the bathhouse. They can learn that Duke Thalamra Vanthampur herself has hidden Kreeg and is using him to perform a ritual using the Shield of the Hidden Lord to do the same thing to Baldur's Gate, giving her full power over the city until it too descends into hell.

Lore of the Shield of the Hidden Lord

One fun story to weave into this section is the excavation of the Shield of the Hidden Lord from the Hhune crypts beneath Baldur's Gate. As the characters question NPCs and cult members, they can learn that the Vanthampur family hired the cult of the dead three to break into the cavernous tombs of the Hhune family, the family that formed the backbone of the Knights of the Hidden Lord, and recovered the shield. Baldur's Gate's crimes and murders grew exponentially when the shield was lifted from the strange sarcophagus from which it was lifted. The sarcophagus, the characters may learn, was lined with some sort of strange warm metal that burned those who touched it and prevented the entity within the shield from telepathically reaching out. Now that it is free, the shield is like a poisoned seed in Baldur's Gate.

This whole story can be given out in a series of secrets and clues the characters discover during their investigation of the cults under the bathhouse. If you wanted to extend this section, you might look at Shield of the Hidden Lord by MT Black on the DM's Guild. Personally, I recommend moving quickly through the events of Baldur's Gate so you can get to the fun meat of this adventure in Avernus. Still, the story of this ancient shield is a fun one to weave into their exploration. Here are some secrets and clues you can weave into the adventure as the characters hunt down the cult of the dead three:

These secrets are enough to keep the story moving towards the Vanthampur villa.

The Shield, the Puzzlebox, and Kreeg

Once the cult of the dead three has been dealt with, the characters should have three main leads to follow, all of which point towards Vanthampur villa. They should learn that Thavius Kreeg, the engineer of the fall of Eltruel, is sequestered away underneath Vanthampur villa along with a strange puzzlebox he brought with him and the Shield of the Hidden Lord excavated from the Hhune crypt beneath Baldur's Gate.

With Reya Mantlemourn as their primary quest giver, the young Hellrider will send the characters to the villa with the intent to kill Kreeg (whom she believes betrayed and destroyed Elturel), acquiring this strange puzzlebox, and recovering the Shield of the Hidden Lord to remove it from Baldur's Gate. She tells the characters that she has a friend in Candlekeep, a sage of the occult, who can tell them more of the shield and the puzzlebox once they acquire it.

Laying out this primary quest so clearly helps move the whole story forward to chapter 2 but still gives the players some agency by deciding how they want to infiltrate Vanthampur Villa.

Skipping the Low Lantern and other Side Treks

If you want to move the story forward, you can skip the section on the Low Lantern and any other side treks in Baldur's Gate. If, however, you enjoyed spending time in Baldur's Gate, there are ways to extend it as well such as the Baldur's Gate: City Encounters supplement by Justice Arman, Anthony Joyce, Anne Gregersen, and Gordon McAlpin.

Otherwise we can skip a lot of what's going on in the rest of Baldur's Gate and head straight to Vanthampur Villa.

Running infiltrations of villas is a great way to enjoy the bounded sandbox playstyle of D&D. The motivations are clear: find Kreeg, find the Shield of the Hidden Lord, and find Kreeg's puzzlebox. If they saved Mortlock Vanthampur in the dungeon of the Dead Three, the estranged son of the Vanthampurs can give the characters a map of the upper villa to help them plan their caper. How the characters go about infiltrating the villa and accomplishing these goals is up to them.

Good manor heists are awesome to run. We DMs don't know what's going to happen. We set up the situation and help the characters accomplish their goals. Manor staff walk in at just the wrong time. Brothers betray brothers. All sorts of fun things can happen.

The characters will end up in the sewers and chambers below the villa and face Kreeg, Thalamra Vanthampur, or both. It's imperative that the characters deal with Kreeg, get the shield, and get the puzzlebox. If the characters aren't headed to the right place, move the maguffins.

To Candlekeep and Hell

With the puzzlebox and shield in hand, the characters and Reya Mantlemorn make their way to Candlekeep. If you want to expand Candlekeep, even if in just your description, check out the excellent Elminister's Candlekeep Companion, a supplement by Anthony Joyce, Justice Arman, Ed Greenwood, M.T. Black, Jeremy Forbing, Trevor Armstrong, and Laura Hirsbrunner. This book gives an excellent history of Candlekeep, describes locations, offers adventure ideas, and even includes a director's cut of Descent into Avernus worth checking out.

If your goal is to get the characters into chapter 2 quickly, you need not worry about filling it out too much but Candlekeep is a truly unique location in the Forgotten Realms and worth the time to describe to your players.

Sylvira's opening of the puzzlebox can be a bit passive when it comes to the characters. From the time they leave Baldur's Gate to the time they show up in Elturel in Avernus, the players don't really have many choices or many actions to take. One way to give them something to do is to have some demonic ichor drip from the cube and cause spined devils to burst fourth and attack while the cube is opening. They demand Kreeg and, when they do not get him, they attack.

Before they leave Candlekeep, it's likely time for a quick shopping expedition. Give the characters the opportunity to explore Candlekeep, look up lore, and shop for whatever they think they'll need in Avernus. Scented soaps, clean handkerchiefs, chocolate, fine wine; things people in Avernus are going to love.

Convincing the wonderfully strange Traxigor to teleport them into Avernus could also be a fun roleplay scene, even if the foregone conclusion is that he does it. Once he teleports the characters to Elturel and Avernus, he teleports right back out again.

One big question to consider is how to introduce the true voice in the Shield of the Hidden Lord, the demon lord / demigod Gargauth. You could have Sylvira herself note the fiendish nature of the shield or you could let this burn out slowly, giving the characters useful information and useful help enough so that they continue to stay with the shield. A fiendish nature to the shield can offer some foreshadowing though. Once they learn the true nature of the shield is the time when it should become indispensable to them. That's one of the first times the characters have to make bad choices for a greater good and it won't be the last.