This article offers tips for running chapter 2 of the D&D hardcover adventure Baldur's Gate: Descent into Avernus and contains spoilers for the adventure.

Most Important Tip for Running Descent into Avernus

In previous articles I described this tip but will do so again because it's the best way to make sure your players have a clear motivation to play through this motivation.

Tie the characters to Elturel, Reya Mantlemourn, and the Hellriders.

As written, the characters have little motivation to dive into hell to save Elturel, a city they may never have been to, for Reya Mantlemourn, a woman they haven't ever met. If you tie the characters to Elturel, Reya Mantlemourn, and the Hellriders, they will have a clear motivation to follow through with the main story of this adventure. You can read more about this in Running Descent into Avernus: The Fall of Elturel. 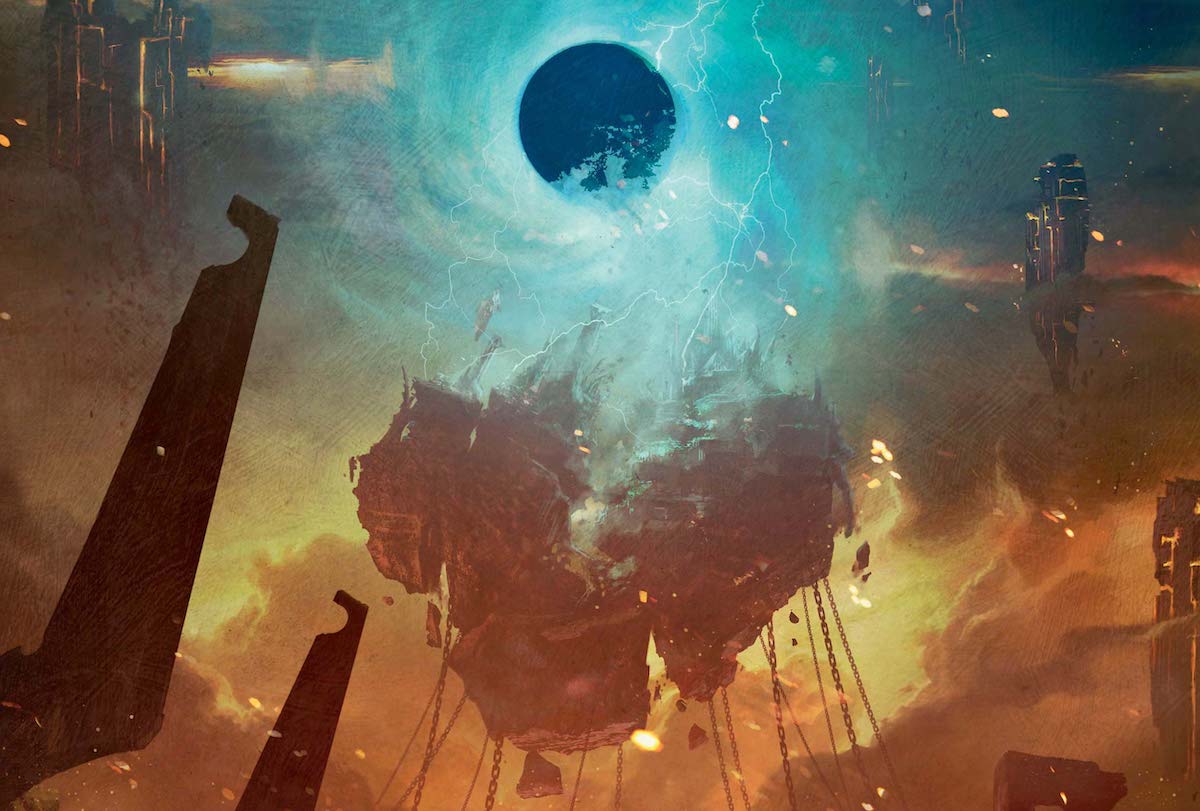 Unlike chapter 1 and chapter 3, we can largely run Descent into Avernus chapter 2 as written. It's a straight forward chapter with a clear line of quests and straight forward locations. The flowchart in the chapter shows us clearly what must be done, though its important to understand that the goal of the chapter is to lead the characters to Fort Knucklebone to meet Mad Maggie and ask about the location of the Sword of Zariel and the Bleeding Citadel that surrounds it. That is the quest sinew that connects the characters' arrival in Avernus to the main story of the adventure.

We can certainly tune parts of this chapter as we run it, tailoring it for the stories that resonate best with the characters, but mostly this chapter doesn't need modification to keep the overall thread of the adventure going.

Wildcard: Shield of the Hidden Lord

In Chapter 1 the characters likely acquired the Shield of the Hidden Lord, an artifact possessed by the arch-devil Gargauth. This is a fantastic vehicle for secrets and clues and as a fun bit of corruption in the party if you're into that sort of thing. Gargauth's motivation is to escape the shield, which he fails to do when he arrives in Avernus with the rest of the characters. At that point he likely doesn't know how to escape or who might help him do so, so he'll stick it out with the characters guiding their direction towards his escape. Whether the character sense his evil or not may come out over time. If they try to dump the shield, you may want to give them good reason to hang onto it. Perhaps the shield finds its way back to them on the arm of a horned devil or some other way. Make it clear that the power and knowledge of the shield can help them.

In particular, it's possible Gargauth knows of Fort Knucklebone and the sage Mad Maggie who can help the characters locate the Sword of Zariel.

Use the Shield of the Hidden Lord as a vehicle for secrets and clues and a guide in Avernus when you need it.

When the characters arrive and travel through Elturel reinforce the sights, sounds, and smells of hell. The sky burns and roils above them. The air smells of sulfur and brimstone. Towering black iron spikes pull the massive chains to the soul-screaming River Styx below. Don't lay it all on at once but continually reinforce the alien and damned nature of the world around them. Channel your Hellraiser.

When the characters arrive at one of the two bridges you can describe the huge drop to the wasteland below including the huge massive chains and the spikes lowering the city to the river.

Descent into Avernus has an excellent set of encounters you can run in Elturel. Shake up the encounters based on the pacing of the game. The characters shouldn't face combat encounter after combat encounter against devils and the like. There are plenty of roleplay encounters you can weave in for a change of the story. Let the characters see wars between demons and devils in the streets. Let them see a powerful narzugon riding through the streets on its nightmare with its hell lance leaking burning droplets of molten metal onto the ground. This very narzugon may be Haruman from chapter 3, one of Zariel's generals. Of course, let the characters see it, not fight it, or it will be a quick and bloody battle.

If you're looking to expand Elturel, consider the DM Guild supplement Encounters in Avernus. It's an excellent set of random encounters you can drop into Avernus, the River Styx, or Elturel itself.

Look to drop in an encounter each time the characters travel from one notable location to another. When the characters arrive they may face one interesting encounter on their way to the bridge. Than another between the bridge and High Hold.

When they reach the bridge, it's a great time to reintroduce Grace Lyn, the girl from Fall of Elturel who survived the descent of Elturel into hell. She can be an excellent emotional draw of the characters and a great motivation for the characters to save the city.

When the characters get to High Hall they fight more devils and then meet up with the remaining refugees of Elturel. Here they learn that Uldar Ravengard went to the cemetery of Elturel to recover the Helm of Torm's Sight. If you've woven Gideon Lightward in, he can be found here as well.

One bit of fun in my own campaign was changing Gideon Lightward into the leader of the Hellriders now revealed as a vampire. He recruits the characters to close the demonic gate of Baphomet but really he wants to recruit them into the Blood War. Gideon can be one of Zariels generals as well, one who followed her path to darkness and prepared Elturel for its descent. We can have a lot of fun following Zariel's generals this way including Gideon, the vampire Jandor Sundstar in chapter 3, the narzugon Harumon, and the ghost Yael who pierced the Sword of Zariel into the ground of Avernus. This can be a great line of lore to reveal throughout the adventure.

The scenes in High Hall are also great ways to reconnect with Reya and her own motivations in Elturel and discover Lulu's strange connection to the plane. Like the Shield of the Hidden Lord, Lulu is a great vehicle for secrets and clues as well as giving just the right information at the right time to help the characters move forward.

With the refugee meeting completed, the characters head to the cemetery of Elturel to save Uldar Ravengard and learn of the next leg in their quest to save Elturel.

We can run this as-is or we can add a bit of fun. In my own game, as mentioned, I turned Gideon Lightward into both a vampire and the leader of the Hellriders in Elturel. As a vampire, Zariel gave him immunity to the light shining down from the Companion for all those years, letting him hide in plain sight. Now, in Avernus, Gideon shows his true form and recruits the characters by explaining that, as allies of the Hellriders, their best course is to become devils and fight back the hordes of demons as Zariel wishes. We could have Gideon weakened by his own fight with the minions of Baphomet if we want the characters to stand a chance fighting a full-fledged vampire or he could leave disappointed when the characters turn him down, saving Gideon for a future encounter.

As for closing the gate we can spice things up by adding a couple of demonic pillars in the room that the characters must shatter to close the portal before a host of fiendish minotaurs step through the gate. On the other side the characters can see a twisted abyssal layer that looks like an endless labyrinth, the lair of Baphomet. When the characters close the gate, they can save Uldar, have any final confrontation with Gideon, and get back to High Hold.

With Uldar back at High Hold the characters can either cast a remove curse or conduct a ritual to remove the helm from Uldar. At that point Uldar describes the knight, Yael, driving Zariel's sword into the ground of Avernus and creating the Bleeding Citadel. The only question is where it is and no one seems to know. At this point, someone; maybe Gargauth, maybe Lulu, maybe a devil the characters have spoken to; lets the characters know that their next step is to find Mad Maggie at Fort Knucklebone.

Now the characters make their journey, one way or another, down the huge chains to the surface of hell and their journey across Avernus begins.