While some are quite happy designing their own maps from scratch to run in their D&D games, us lazy dungeon masters are much happier stealing maps wherever we can. The maps in Lazy DM's Workbook are designed specifically around this goal. These maps are built around the most common dungeons in D&D including the crypt, castle, dungeon, caves, sewers, temple, mines, cellars, docks, and wizards tower. These are all common staples in our fantasy RPGs. If those ten maps don't get us what we need, we can always hit up the map archive of Dyson Logos which has more than 750 maps we can choose from.

These maps alone, however, may not fit the intention we have for the dungeon in our game. What if we steal a dungeon with fifteen rooms but only need three? What if the dungeons in our game span different environments? How can we build an entirely new map without starting from scratch?

Simple, we smash two of them together. 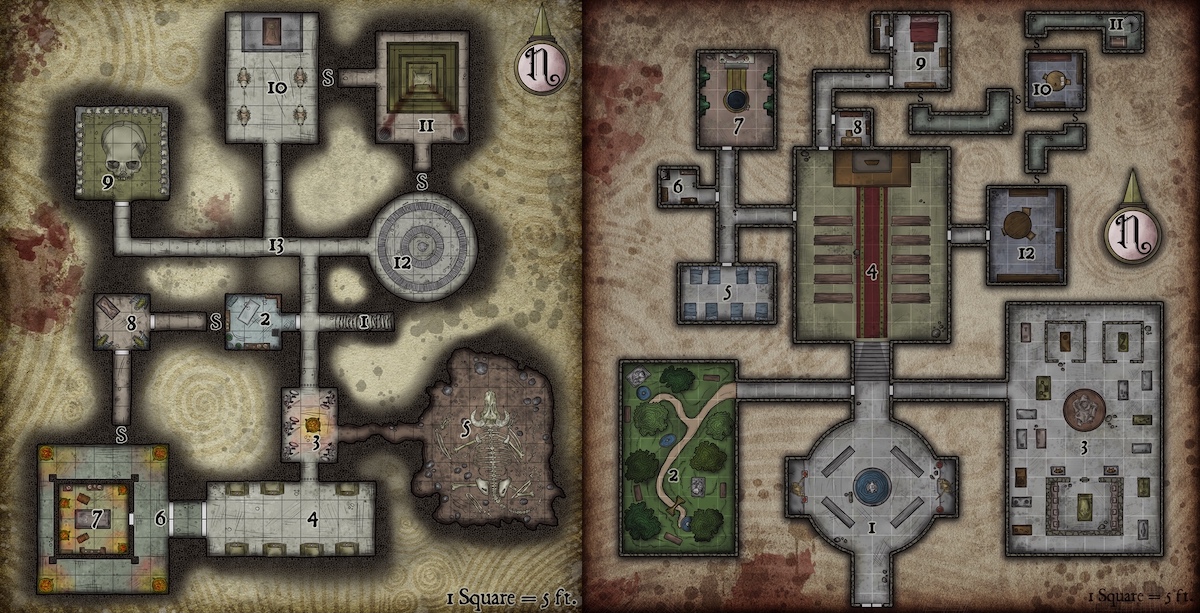 Let's say we want to run a small temple with a small catacombs beneath it. We have the above maps (drawn by Elven Tower), of course, but these might be too big for us.

Just like mixing a few traits from different monsters can make an entirely new monster (hello vampire!), we can take a few rooms from our temple map and a few rooms from our catacombs map and build something entirely new. We might, for example, only use 1, 2, 9, 10, and 11 from our cacacombs map and rooms 1, 2, 3, 4, 5, 6, and 9 from our temple map. We might add in hallways that connect rooms 2 to 5. The big pit in room 7 of the temple map might lead to the giant skull in room 9. Now that's an interesting connection!

Starting With the Rooms We Need

When we prepare for our game and go through the eight steps from Return of the Lazy Dungeon Master, step 5 has us identifying fantastic locations. Typically we need only one such location for every 45 minutes of gameplay. For a single-session four-hour adventure we might need six to eight such locations. We can start by looking at the maps we are thinking of using, selecting the rooms that fit the story, and cutting out the rest. Instead we can start with our locations and then look for generally appropriate maps to connect them together. Often one map alone won't be perfectly suited but two maps cut up and smashed together can suit the job perfectly.

Doing It All In Your Head

Some DMs might be tempted to sit down with some sort of computer program and redesign the maps, actually cutting and pasting rooms together into a new physical map. That's likely not necessary. Sometimes we can just write down the list of rooms and know, in our heads, that the others aren't accessible.

Many times we DMs build out our adventures as though someone else is going to rum them. We add flavor text; we draw beautifully designed maps; we write up large random-encounter lists; we carefully document dozens of story threads, hooks, and plot seeds. It's unlikely anyone else will ever see these notes, however. They're just for us. Thus, our notes can be much briefer than we might expect from a published work because it's all in our head already. We don't need carefully written read-aloud text; we just need a couple of words to remind us what's in a chamber so we can describe it to our players when the game comes around.

The same is true for maps. Some might want to spend an hours drawing a beautiful Dyson-quality maps but sometimes a stick figure is all we need to know how a bunch of rooms are connected. Some square blocks and interconnecting lines are all we really need to run such a location.