Of all of the spells in the 5th Edition of Dungeons & Dragons, there are few that suck the fun out of the story more than counterspell. Counterspell pulls the flames out of fireballs. It sucks the air out of a cone of cold. It turns the game into an arms race where spell levels start disappearing on both sides with no real results either way.

The way we're used to running counterspell is to simply say "nope". Is the mage about to drop a 10d6 fireball on a pack of enemies? Counterspell says "nope"! You can almost hear the squeaky farting sound in the air—a sound that is anything but fantastic.

Let's talk about Harry Potter for a moment. Remember all those wizard duels between Potter, Voldemort, and Dumbledore? Those are filled with counterspells. Remember when their wands connect and bolts of green and red flame burst around dripping molten arcane energy onto the ground? That's counterspell. 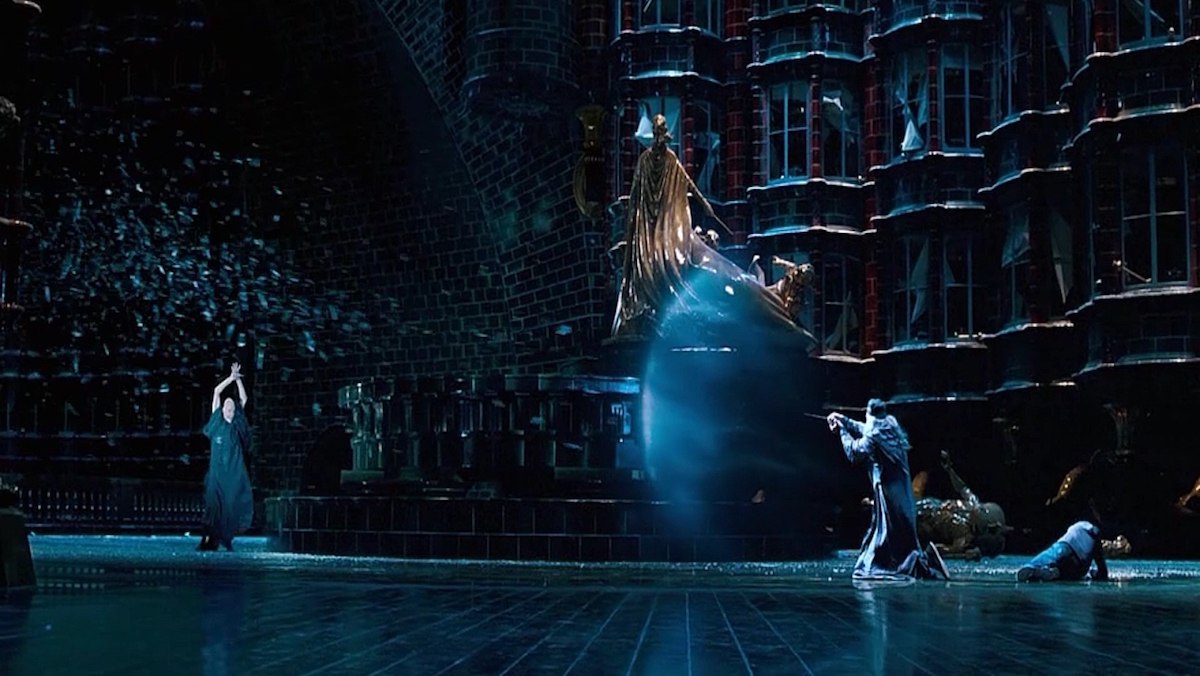 In the final battle where Harry and Voldemort lock wands and Harry finally pushes him back and disintegrates him, think how many spell levels they had to spend before Harry finally got through. That's what a layered set of counterspells looks like.

The Harry Potter movies are our model for how to make counterspell awesome and that's how we should describe it when counterspell is cast.

Counterspell feels like such a flavorless "nope" spell only because we don't think of it as the antithesis of the spell it's countering. When a PC casts fireball and the mercenary mage casts counterspell, describe it as a whirling windstorm that pulls the fireball into an inferno and launches the vortex up into the clouds. When a PC casts lightning bolt, describe the bolts of red light cast by the enemy lich that smash into it, leaving puddles of molten arcane energy burning on the floor. When a PC casts banishment on your favorite pit fiend, describe the angelic hand that reaches for it through the rift between worlds and then the twisted tentacles that tear into the angelic hand, pulling its skin down to the bone before the hand retreats into the rift with no pit fiend in its grasp.

The question comes up on whether or not this violates the rule that a spellcaster can only cast two spells on a turn unless one of them is a cantrip. That rule, however, only applies to bonus action spells. There is no such rule for casting spells as a reaction.

A spell cast with a bonus action is especially swift. You must use a bonus action on your turn to cast the spell, provided that you haven't already taken a bonus action this turn. You can't cast another spell during the same turn, except for a cantrip with a casting time of 1 action.

The section on casting spells as a reaction has no such limitation.

Some spells can be cast as reactions. These spells take a fraction of a second to bring about and are cast in response to some event. If a spell can be cast as a reaction, the spell description tells you exactly when you can do so.

Another argument against being able to cast counterspell to counter a counterspell comes up when discussing whether or not a spellcaster can use a reaction during their turn. While it wasn't allowed in the 4th edition of D&D, it IS allowed in 5th edition and is specifically spelled out in the rules.

Certain special abilities, spells, and situations allow you to take a special action called a reaction. A reaction is an instant response to a trigger of some kind, which can occur on your turn or on someone else's. The opportunity attack is the most common type of reaction.

Finally, this very example is directly addressed in the sage advice compendium:

Can you also cast a reaction spell on your turn? You sure can! Here's a common way for it to happen: Cornelius the wizard is casting fireball on his turn, and his foe casts counterspell on him. Cornelius has counterspell prepared, so he uses his reaction to cast it and break his foe's counterspell before it can stop fireball.

But really, we should ignore all that nonsense and remember how and when to make counterspell awesome. Too much counterfuckery on the side of the DM can really ruin the fun for players. Thus, we should only consider using counterspell on the DM's side if it will truly make the game more fun. Don't do it to save your favorite bad guy. Don't do it because you didn't plan on a fireball and all your bad guys are going to get killed in a single blast. Only do it if the players are short-circuiting the game by casting big-ass game-breaking spells over and over again. Breaking the game once or twice is awesome. When it becomes routine, then it might be time to make things a little more interesting with some well-placed counterspells.

When the counterspell battles start to explode, we should pour flavor out of every orifice of our bodies while this is happening. We should be standing up. We should be pantomiming what is going on. We should be making so many sound effects that we have to wipe our spit off the table when we're done.

Every counterspell is another beam of huge and powerful energy pouring out of arcane casters. It's sucking the life out of them to keep these counterspells going. People can see the cracks of magic smashing into one another for miles around. Purple veins are popping out of their foreheads and their eyes are going black. A counter to a counter to a counter is like smashing three high powered microphones together hooked up to a 10,000 watt amplifier. No one should be able to hear for a week when it's done.