This is the first in a new series of articles that focuses on how particular spells in D&D can tell stories all by themselves. The core D&D books are full of fantastic ideas for stories but sometimes its easy for us DMs to focus too much on the mechanics to think about what they mean in the worlds we share.

Each spell has its own particular story to it, it's own way that it alters the universe in some way that might have effects both small and profound. Consider the humble prestidigitation spell, a cantrip that keeps things clean. Imagine a whole business built by hedge mages, failed wizards, and sorcerer outcasts who make a living keeping things clean with this spell on its own. It's the world's best dry cleaning service. This simple spell can lead to a whole place ("Percy's Palace of Prestidigitation") that might find its way as a storefront in a game we run. We might even tie another story into it. Maybe that aged wizard who supposedly failed out of the academy isn't as frail as he appears, he's just been in hiding for the last two hundred years.

Spells can each tell an interesting story and we're going to explore this idea in articles to come where we look at a particular spell and the stories that might evolve from it when we look at them under a new lens.

Today we'll do so with the spell fireball. 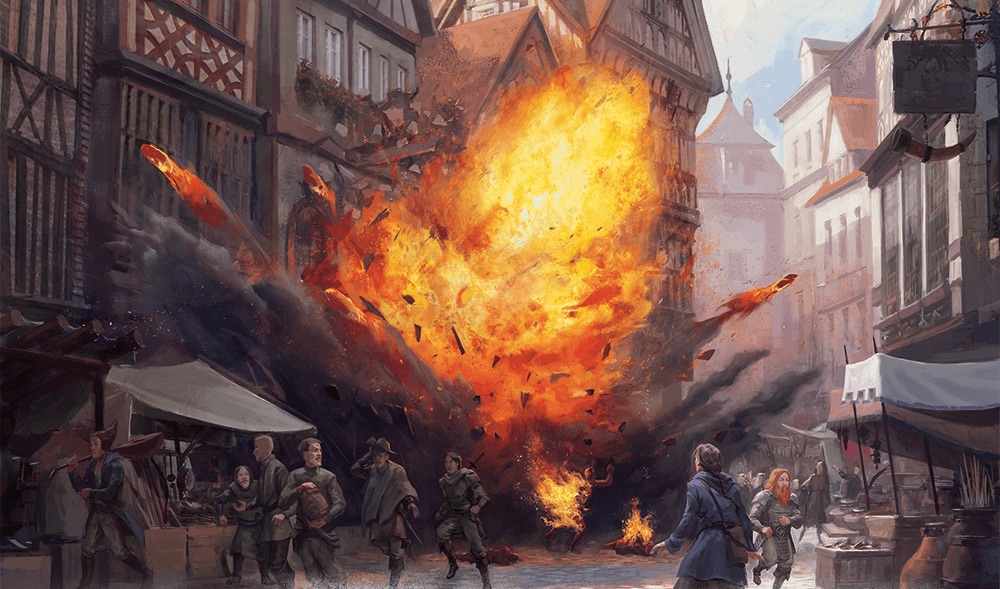 Fireball is an incredibly common and popular spell. It's been in every edition of D&D since the 1970s. Fireball is one of the most basic spells we can imagine too. Players love it because it's so simple. You point a finger and things explode. But there's a story in there too. A story with many facets.

A Story Driven by a Fireball

The D&D adventure Waterdeep Dragon Heist has a whole chapter built around a fireball. The chapter is actually called "Fireball". Things are perfectly smooth in Trollskull alley, everyone's going about their business, and then boom. The world is in chaos.

We don't think much about a fireball but such an explosive spell can change lives in a city setting. A fireball in a crowded street is an event of great note, as it is in this adventure. It begins a great mystery. Who cast it? Who was in it? What did people see? Will it happen again? A single fireball like this can drive a whole story forward, bringing danger and mystery to an otherwise peaceful day.

Imagine a royal ball in which the characters are trying to uncover the assassin who plots to kill the local lord. What if that very assassin, to cover her escape, draws a bead from her necklace of fireballs and blows up half of the ball. Now the characters have to make a hard choice of chasing their quarry or saving the people who remain alive in the burning ballroom.

We can use fireballs in other ways in our story as well. If the characters are exploring a chamber and find a room with singed walls and dozens of dead charred goblins, they'll know what might have done it and they know what sort of being they might face. Not everyone can cast a fireball in the first place. Such a sign is a clear indicator that a wizard is near, and not just an apprentice but a seasoned mage.

The fact that fireballs are third-level spells cast by fifth-level NPCs means something important on its own. If we assume a rarity to wizards the higher they go up in level, fireball-casting wizards are not all that common. Even cult fanatics can't typically cast them. These are the spells of true and powerful villains.

Fireballs can also do more than just blow up rooms full of kobolds too. We often forget how these spells can change the environment. A fireball cast inside a building or tavern will likely set it ablaze or blow it apart. We might watch buildings explode outward from a mage battle taking place within it. A fireball in a sealed area might suck out all of the oxygen and make the whole area difficult to breathe in or difficult to see through. In the right environment, fireballs can completely change a situation.

We can't forget about the noise either. Fireballs aren't quiet. Spellcasters who cast it are going to be heard and those who hear it may come running or might run away. The noise created by a fireball can dramatically change a situation in many ways.

An Explosive Shift in the World

Though a common, popular, and relatively simple spell, when used as a vehicle for the story, a fireball can cause a dramatic shift in a campaign. As we saw in Dragon Heist, it can be the catalyst for an entire arc of a campaign. The more we think beyond the mechanics; the more we look at how spells affect the world, the more those stories can drive the direction of our shared stories.