Of all of the monsters in the 5th edition of Dungeons and Dragons, few are as complex as the mage. The bulk of the mage's capabilities lie in their spells. Use the right spells and the mage can be a powerful and fearful villain. Use the wrong ones and the mage will be a small red streak on the dungeon floor half-way through round one.

Unfortunately, the description block for the mage doesn't give us any good ideas for how best to run it. We're here today to solve that problem. In this article we're going to take the mage, tweak it, study it, and turn it into a spell-laced killer, a being the PCs will fear and one of whom they will tell tales when they sit comfortably in creaking darkwood chairs in front of a burning hearth, assuming they survive at all.

Note, for this article, we're going to look at the NPC mage on page 347 of the D&D Monster Manual and also available in the D&D Basic Rules. Many of these techniques will work for higher-level mages and for spellcasting monsters as well.

Now start by taking a look at an updated stat block for our powerful war mage. 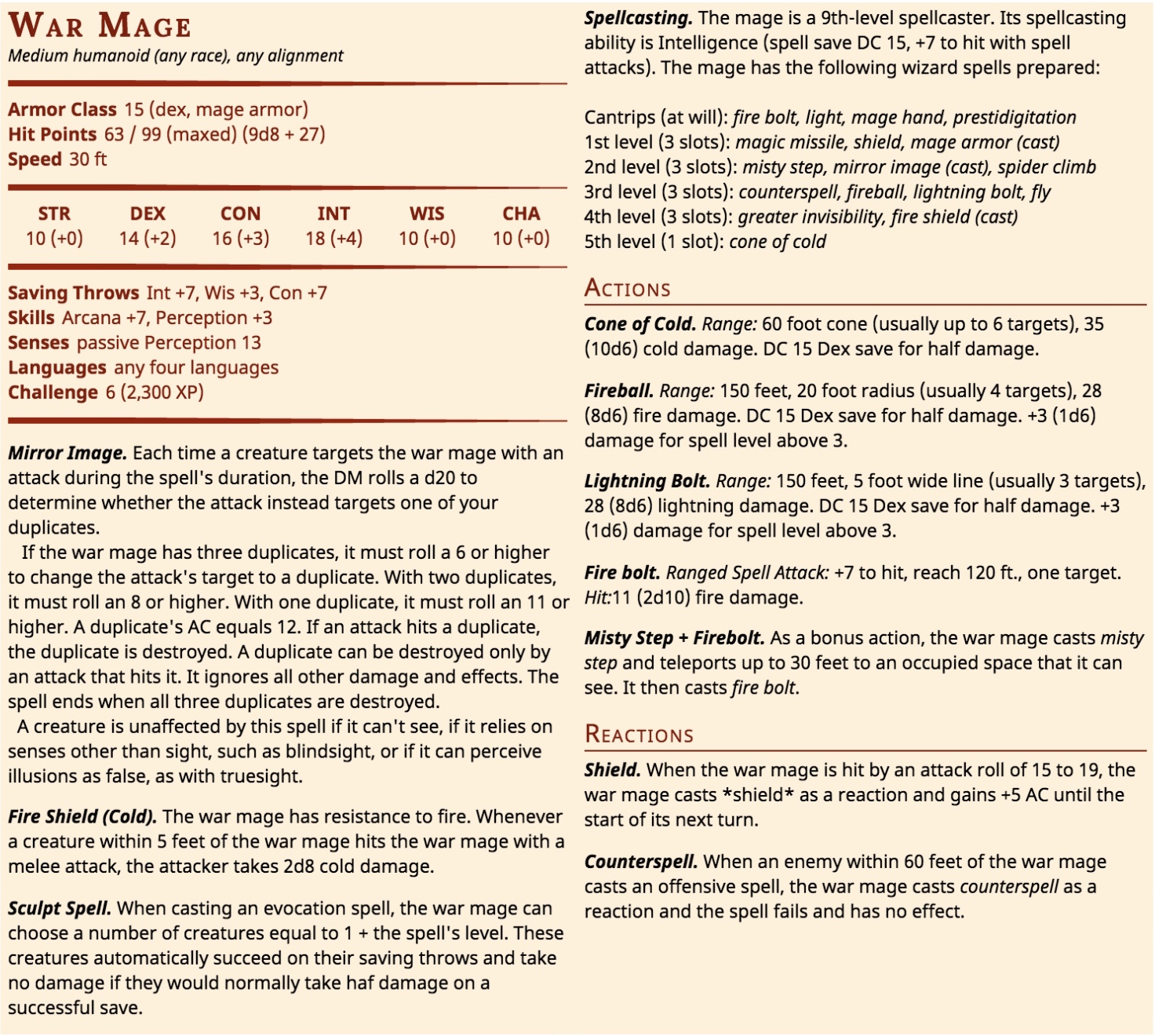 How did we get here? Let's dig in.

We begin by tweak the mage's attributes. As published, the mage has a spread of moderate attributes. Instead, we beef it up by boosting three vital stats: intelligence, dexterity, and constitution. The mage's intelligence at level 9 really should be 18, so let's bump that up. This puts the mage's spell attack bonus at +7 and it's DC at 15.

Second, let's increase constitution up to 16. This will be one healthy mage, but, more importantly, it will be one with an extra 18 hit points. This takes the average to 63 hit points but, if you really want to be mean, max out the hit points to 99.

Lastly, giving the mage a dexterity of 14 will boost up it's AC to a base of 12 and a total of 15 with mage armor.

With these three stats modified, we have a much tougher mage.

To arm our war mage, we're also going to modify its spell lineup. Here are a few changes:

If the mage has a chance to prepare before a battle, it can protect itself with the following spells:

Mage Armor. Every mage should have this going since it lasts nearly all day.

Fire Shield. If it looks like your mage is going to get attacked with melee attacks, dishing out 2d8 damage when hit with a melee attack can really add up. Imagine a dual-wielding fighter dishing out six attacks and taking 12d8 cold damage in return!

Bonus Tip: Draconic Fire Shields! Fire shield is a fantastic spell to give powerful dragons. Since dragons are stuffed with hit points, they'll dish out tons of damage as they're hit with melee over and over again. It's a nice way to beef up the challenge of a dragon and yet can still be dispelled by a crafty mage to overcome that challenge.

Greater Invisibility. An excellent concentration spell that prevents most direct targeting and imposes a big penalty when being attacked. You probably don't want to use both this and fire shield at the same time so choose one or the other.

Another Option: Blink. Blink is another powerful protection spell you might consider instead of fire shield. It doesn't require concentration but it can be a bit boring for players to fight. Blink lets your war mage pop out of the battle field 50% of the time, which helps them a lot but can make for a frustrating encounter. You might consider it for some encounters or if you have more than one wizard in a fight. One might be a beefy mage with 99 hit points and fireshield going while the smaller 63 hit point one is using blink to stay out of the fight.

Lightning bolt, fireball, and cone of cold are the main offensive spells of the war mage. They don't require concentration, usually hit more than one target, and deal a huge amount of damage. The war mage should cast lightning bolts and fireballs as level 4 spells saving its level 3 slots for counterspells should it need them. Cone of cold is a hell of an opener if you really want the PCs to feel the burn.

The mage has two important reactions it can take: shield and counterspell. If it had a chance to cast the protection spells above, the mage is particularly susceptible to dispel magic and will want to save counterspells for that. If it is well defended with mage armor and mirror image, it isn't likely to need shield but it's always nice to have on hand.

If the mage gets pinned down, it can use misty step to teleport to a safe spot and then follow up with a 2d10 firebolt. Since misty step is a bonus action, you can't cast a full spell right afterwards. If you don't think misty step is going to see much use, switch it out for scorching ray, a nice multi-target attack spell.

Some wizard spells are definitely better than others. If you run a lot of NPC mages, it's possible one mage will feel very much like another. Reflavoring your mages is a great way to make each mage feel unique. Changing the elemental nature of spells will certainly get attention. We can create an acid mage that fires huge blasts of acid instead of fireballs and sprays acid out of its wounds for it's fire shield or a shadow mage who casts nightmarish stampedes instead of cones of cold and shadowblasts instead of lightning bolts.

The best way to ensure mages don't all feel the same is to change things up. Maybe some of your mages choose blink and invisibility while others choose mirror image and spider climb. Not every mage has to use the same defensive spells in every fight. Changing it up will give players a wide variety of different challenges to overcome.

Above all, however, play your mages smart. Mages didn't reach 9th level by letting a pack of fighters kick their ass every day. Empower your mage and watch the PCs squirm.