I love the roleplaying game 13th Age by Rob Heinsoo and Jonathan Tweet. Written as a love-letter to D&D by two designers who worked on two different editions of D&D, 13th Age has some of my favorite rules for running great roleplaying games. Like Dungeon World, it's a RPG that often gets pilfered for great ideas DMs can bring into our own games like the "one unique thing", the escalation Die, and their method of abstract combat.

I also love the monster design of 13th Age. As a simplified version of 4th Edition D&D's monster design, monsters in 13th Age are easy to use and are some of the most well-balanced monsters in any d20 game I've played.

It also has a really cool feature that, like the others mentioned above, we might pilfer and use in our 5th edition D&D games: the nastier special.

Many monsters in 13th Age include a way to beef them up to build a really tough challenge if the GM wants one. Here's an example for the Hezrou: 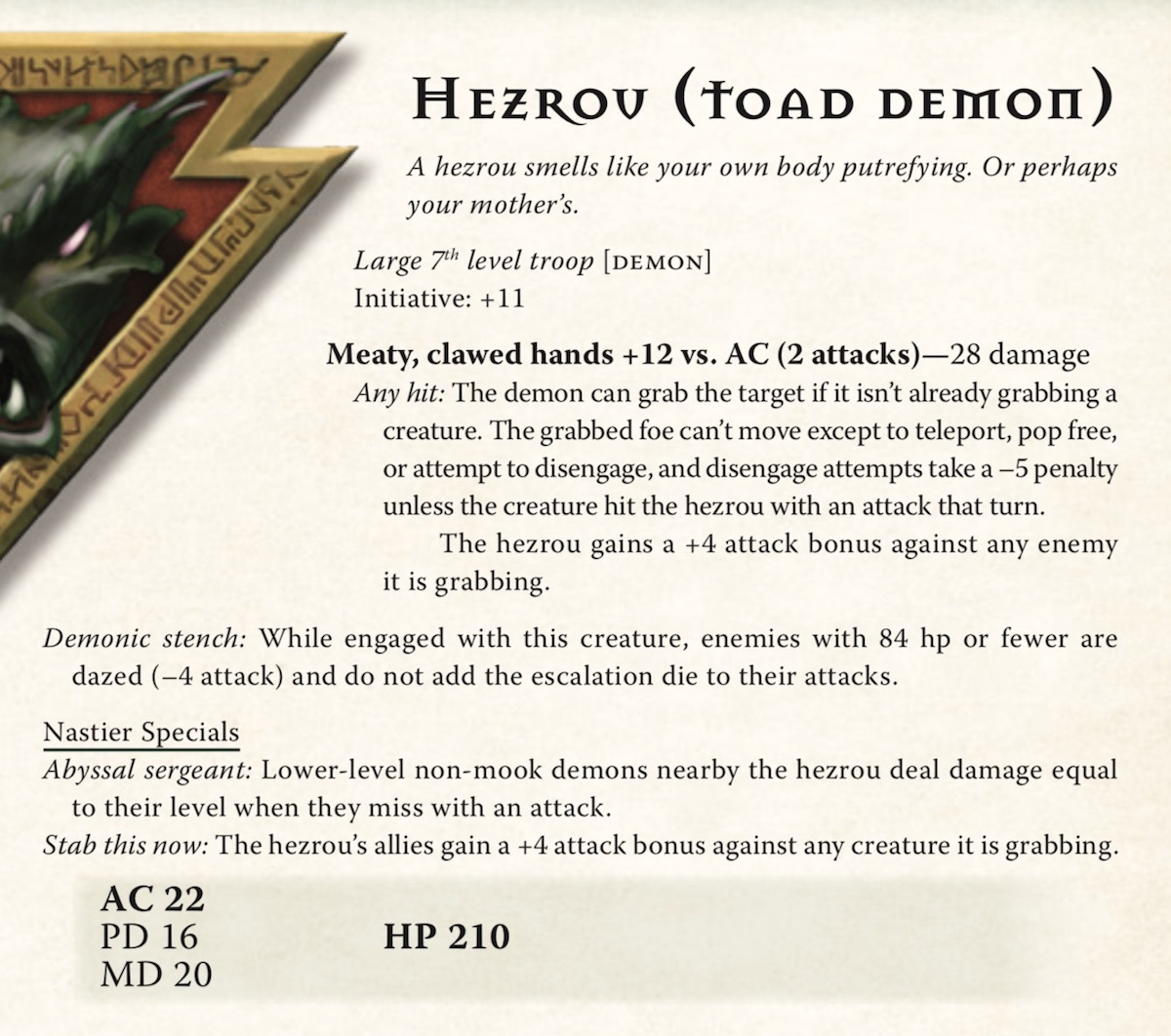 The fifth edition of D&D doesn't have clear dials like this we can use to change the threat of a monster. The system, however, is flexible enough that we can come up with our own, often improvising them right on the spot if we want. Once we have some experience built up, if something feels right, we can drop in our nastier specials without any work at all.

We've talked before about building stronger encounters and how to improve boss fights. This article goes hand-in-hand with both of those.

The following is a list of a few potential nastier specials we might add to our monsters. My hope is that these are simple enough that we can keep them in our head and use them when the time feels right for it. We shouldn't need to write them down. Above all, these specials need to make sense within the story. Why are these specials in place? We're not doing it to be mean to our players, we're doing it to add fuel to the fire of the story.

Maximize damage. One of the easiest ways to dramatically increase the threat of a monster is to maximize its damage output. Monsters suddenly start hitting for a lot more, sometimes nearly twice as hard, when their damage is maximized. Are you worried that your high level characters are going to kill Tiamat when they face her? Not if she's breathing for 156 damage as a legendary action! Ok, that's an extreme example, but you get the idea. If you really want a monster to be dangerous bordering on lethal, max it's damage output.

Add extra attacks. Along with or instead of increasing damage, we can give a monster extra attacks. Maybe it attacks faster than others of its ilk. Maybe it's hastened. Maybe it has more appendages available for such attacks. More attacks increases the number of times a monster will hit so you can spread its damage around to multiple targets instead of hammering on one target all the time. This is a good nastier special when a creature is fighting by itself against a full party of adventurers.

Maximize or double its hit points. Bigger nastier versions of a monster could have significantly more hit points than the average listed in the Monster Manual. We are free to change these hit points as much as we think fits the story within the range of the hit dice. We can also just ignore it and double a monster's hit points if there's a good reason. One dirty trick that helps us maintain pacing is to keep in mind the maximum hit points a monster might have and, if it fits the story and the pacing, change those hit points during the fight so a monster sticks around a little longer or drops at the right moment. Yes, it's cheating, but it's for the good of the pace of the game.

Add Legendary Actions and Resistances. We can make any monster a legendary foe by giving it legendary actions and resistances. Typically legendary actions will let a monster attack or move up to three times between its opponents turns. Keep in mind that the power of a legendary version of a monster will be much stronger than it otherwise would be. Legendary resistances also help monsters, particularly monsters fighting alone, to break out of nasty save or suck effects like hypnotic pattern or dominate monster. Again, these should be used sparingly and only when they make sense within the fiction of the story. Why are these monsters legendary?

Damage shields. The spell fire shield is powerful on its own but it's really powerful if it's on a monster that everyone is going to hit. Put it on a dragon and that dragon becomes a lot more dangerous. We don't need to stick to fire or cold either. We can add any element we want to the damage shield. A lich might have a necrotic damage shield or a demon might excrete poison or acid. We can also increase the damage on this, maximizing it to 16 or more if we think it's right. Note that this is particularly hard on monks who attack about seventy times a round and will take damage every time.

Give Monsters Spell-Like Abilities. If you're looking for a nastier special, look no further than the hundreds of spells at our disposal in the Player's Handbook. These spells aren't just for player characters. We DMs can build entire stories around the spells found in that book. And they make fantastic ways to customize monsters. Spiritual weapon, shield, misty step, wall of fire; the list of useful spells for monsters goes on and on. We can reskin and reflavor these spells to fit the theme of the monster as well. A powerful devil might invoke a wall of screaming souls that acts very much like a wall of fire except it does psychic damage instead of fire damage.

We can make these spells more useful by making them part of a monster's attack action instead of using up a whole action for the spell. A drow spellblade might be able to hurl a lightning bolt right after slashing with its own lightning-enhanced scimitar, for example.

We can also give monsters spells that might not otherwise be in our game, like spells from third-party publishers. Unlike giving them to characters and potentially changing the face of our game permanently, a monster with a spell like this will only hit the table once and then be gone. My current favorite monsterous spells are the Blasphemies of Bor Bwalsch by D&D writer and creator of Shadow of the Demon Lord Rob Schwalb. They're awful spells that are perfect for lichs, vampires, demons, devils, hags, and any other hideous spell casters.

Give Monsters Exotic Potions. Monsters don't always have to have access to spells to gain some interesting new abilities. Instead we can give intelligent monsters access to potions or scrolls with some interesting and dangerous abilities. Potions of displacement could give a monster the same trait as a displacer beast. Potions of greater invisibility could give an assassin a seriously dangerous edge. Potions of giant strength can turn monsters or NPCs into mountain-crushing horrors. It makes sense that powerful NPCs like the gladiator or champion would have access to a potion like this. A champion with a potion of storm giant strength is a true foe to be feared. It doesn't hurt if the characters get access to reserve potions like this so they can gain the same benefit even if it's only for a few minutes.

Building Your Toolkit of Nastier Specials

All of these are just examples of the sorts of ways you can tune monsters to be something interesting and unique. New armor, magic weapons, potions, scrolls, and spell-like-abilities are ways to change monsters within the fiction. Simple mechanical effects like increasing it points, increasing damage, and adding attacks are easy to implement and turn a normal monster into a brute.