The Lazy Approach to Stronger Encounters

Sometimes, though, we find that the characters seem to be walking through encounters that should challenge the characters more than they did. While letting the game play out as it will is often the best choice, it's useful to have some tools on hand that can help us bring a greater threat to the characters so they're getting the right frequency of upward and downward beats. We also want using these tricks to be easy so we don't have to prepare them ahead of time and can implement them right at the table with as little work as possible. Let's take a look at some tricks for making encounters more dangerous. 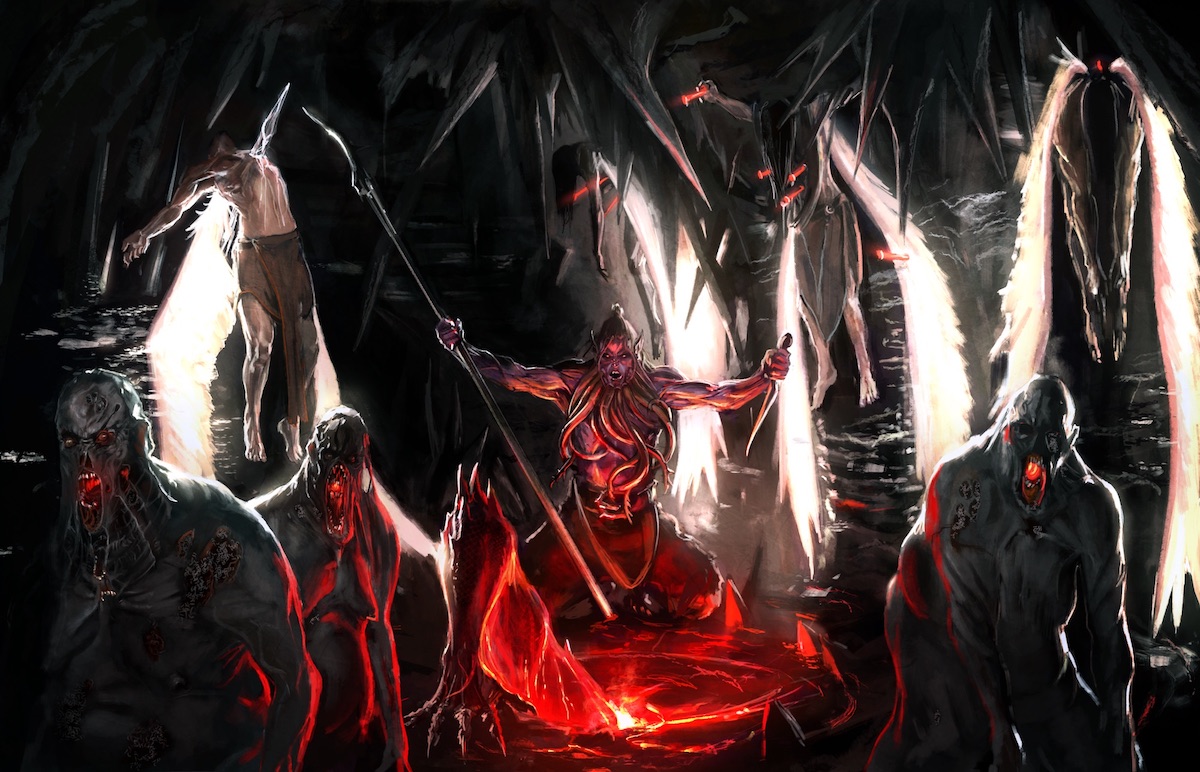 Like it or not, the challenge ratings and encounter balance in D&D 5e is a mess. Xanathar's Guide to Everything gives us much improved tools for building balanced encounters, although it can be even simpler if we keep just a loose gauge of what a "balanced" encounter looks like in our head and then let the situation and story determine the monsters.

If we find that our characters are having an easy time with encounters that should be challenging, we can treat the characters as though they are one or more levels higher than the stated level and see how it goes. Choosing a higher challenge rating threshold will result in more monsters, bigger monsters, or both.

Instead of worrying about balanced encounters using the guidelines, we can just throw more monsters at the characters to increase the challenge. This pushes the action economy in favor of the monsters which will definitely increase the difficulty on the characters. There are few groups who can survive eight angry storm giants.

Adding monsters to a fight was also the number one most mentioned tactic for improving boss fights.

If you're considering a combat encounter and want to increase the difficulty, you can't go wrong by adding more monsters.

Some characters can put out a tremendous amount of damage for their level. If we have particular monsters we want to last past a great weapon champion's action surge or a rogue's assassinate, we might need to give their hit points a boost. We can, for example, increase the hit points of a monster up to the maximum allowed for its hit dice equation. For example, the standard fire giant has 162 hit points but it could have up to 234 if we maximize its hit points from its hit dice (13d12 + 78).

If we don't want to bother with the math, we can simply double the hit points of a monster and consider it an "elite" version. Many published D&D adventures do this for "named" versions of monsters. Doubling hit points is a quick trick to make a more powerful version of any single monster.

Many DMs have made the good point that increasing hit points can turn a battle into a slog. If we increase hit points, we shouldn't require that every hit point be knocked off if the game is getting boring. If we think a monster is going to get killed too early and decide to increase its hit points, we can just as easily reduce its hit points if that turns out to be too much.

It's nice to have a story-based reason for such a boost in damage. Maybe they are surrounded by a powerful necrotic aura that makes them more lethal. Maybe their blade or claws are on fire. Maybe they are blessed by a dark god or demon prince. If you can find a flavorful way to increase their damage, all the better. It's not always necessary but its helpful.

Instead of boosting damage, we might give a monster an additional attack. This works well when we want to spread the threat of a monster to more than one character. A fire giant champion may get three attacks instead of two so it can hit all three of the melee characters piled up on it. Giving a monster another attack requires no up-front math or planning. We just do it when we feel it adds a fun challenge to the monster.

If a monster is a boss of some sort, we can easily give it legendary attacks. This creature gets three legendary actions it can take between at the end of other creatures' turns and these actions can either be a move or a single attack. This isn't a perfectly balanced option. A Chasme would benefit much more from this extra attack (since it only has one attack and it's huge) than a creature with three small attacks that do significantly less damage. Still, its an easy approach for boss monsters.

Likewise we can also give boss monsters a version of legendary resistances to help them avoid being banished or hypnotic patterned into uselessness. It would be nice of us to telegraph this resistance by saying something like "you feel like you are facing a legendary foe". Of course, to apply such a label, a foe like this must really be legendary. Errtu the balor, for example, is not just any balor but a real legendary demon.

Feel Free to Ignore These Ideas

Manipulating monsters in the ways described above can easily be considered dirty pool. An orc is an orc, so why would one orc hit harder, stand taller, and become legendary just because we DMs think the characters need a harder challenge? There is nothing wrong with running D&D as it is, without modifying monsters at all and letting the story get built from what happens.

Manipulating hit points, damage, and adding legendary features to monsters is a form of DM manipulation of the story we may not necessarily want. Still, given our desire to drop in both hopeful and fearful beats, improvising encounters by increasing their difficulty is one way to get us closer to a fearful beat when we need it.

Like everything here at Sly Flourish, we might keep these ideas in our toolbox and use them when they make the game more fun.