The Case for Static Monster Damage

This article has been updated from the original written in November 2015.

The Dungeons & Dragons fifth edition Monster Manual includes static damage as the default in every monsters' stat block and yet 90% of us still roll for damage. The 40 year tradition of rolling for monster damage is a hard habit to break and many have no intention of doing so. This is, of course, perfectly fine. In this article, however, I'll make the case for using static damage values for monster attacks. 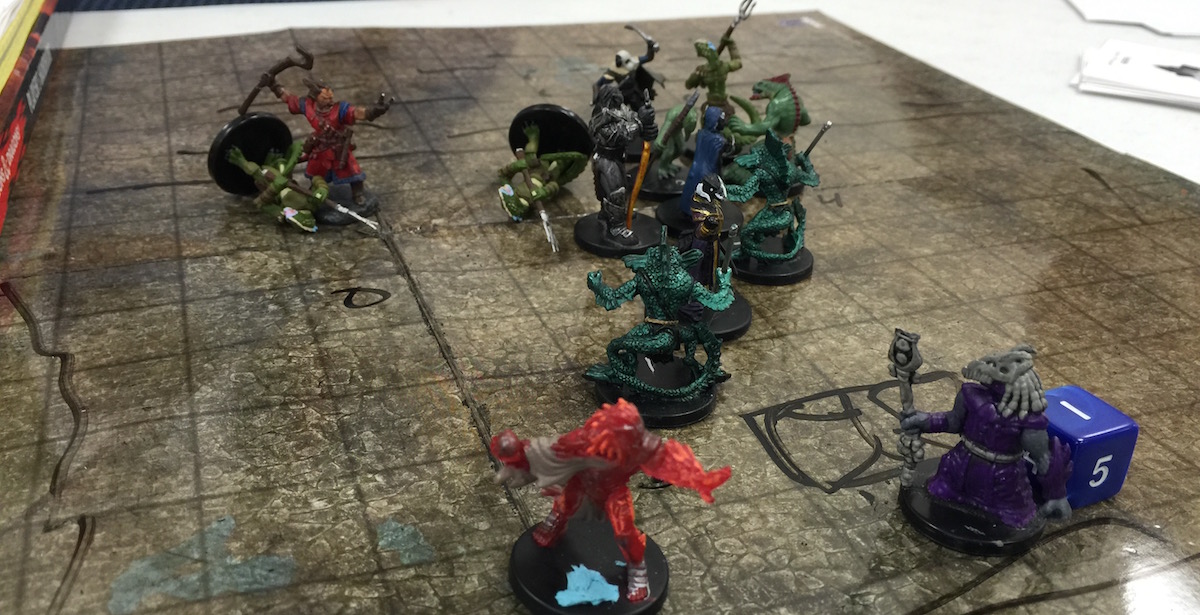 Combat speed isn't a critical factor in the fifth edition of D&D like it was with the fourth edition but we can always trim out parts of our game that aren't as vital to the story unfolding at our table. Rolling for monster damage may be one of those parts. Rolling only attack rolls, even when compared to rolling attacks and damage together, is much faster than rolling both attack and damage rolls. It isn't just about the roll, it's also about the math. Some of us are really good at doing quick addition in our head but its still not as fast as reciting a number we already have in front of us.

Other independent RPGs such as 13th Age and Numenera have moved to static monster damage not only as the default but as the only method of quantifying monster damage. Those of us who have played these games have seen it work well.

There's also an advantage in needing less dice. I've carried a small set of Easy Roller metal dice in my on-the-go DM bag for a while now and I've never need more dice than the seven in that little box (I replaced the percentile die with another d20 for advantage and disadvantage). A simple kit means I can spend more time thinking about the world and less time fumbling around with a giant bag of dice. Blasphemy for some, I am sure, but sometimes we must let old gods die.

While combat length is no longer the problem it once was, using static monster damage is a quick and easy way to speed up our game and put our minds where it belongs—in the story.

It's Within the Rules

Take a look at Monster Manual stat block and you'll notice that the static damage is outside the parentheses with the dice equation on the inside of the parentheses. The implication is that the static damage number is the default rule but, of course, you can roll the equation if you want. Most do. You'll notice that hit points are the same way. How many people roll for a monster's hit points? I'd bet hardly any. How many roll for monster damage? Nine in ten. Why? Because it's what we're used to.

The easiest argument to make for using static monster damage is that, generally, no one really cares. Players love to see the variance in their own damage but they tend not to pay much attention to how well a monster's damage roll went. If things are really down to the wire they might pay attention to how many hits they have left but unless its right on the edge, it still doesn't matter.

"My players will metagame" is a common argument I've heard as I proselytize the use of static monster damage but I don't think it happens that often and, when it does, I don't think it matters that much. If you do see your players continually metagaming monster damage, ask yourself if it really matters that much. They can guess the average amount of damage anyway if they're already paying attention. If the metagaming gets bad, you might have a bigger problem going on. Why aren't the players drawn into the story? And, of course, you can always switch back to dice damage if you want to.

Rolling attack rolls matters a lot. There's a whole lot of variance in that 1d20 roll. There's far less variance in that 6d6 + 7 that a fire giant rolls for damage. Make your life easier and stick to the 28. Focus more of your attention on the story going in on the game and the descriptions of the world as it unfolds and less on the math.

How do you handle critical hits when using static damage? Given its infrequency, this isn't a bad time to pull out the dice. If a monster has a static damage score of "9 (1d8 + 4)" and rolls a critical hit, just roll the extra 1d8 you would have rolled on a hit. On a crit, roll whatever dice are listed in the equation. If you happen to know the average of each die (rounded down), you can use that instead but only if it is actually faster than rolling. It's probably easiest is just to roll the die.

If you want to add a little bit of variance to your damage rolls, you can use the Chris Perkins trick of subtracting 3 from the static damage amount and adding the results of a single 1d6 roll. A fire giant's attack might do 25 + 1d6 instead of the static 27. Honestly, I'm not sure that matters very much and at that point we're back to rolling dice which defeats much of the advantage we had with static damage in the first place. Its one option, however, if we're worried about too little variance.

Tune Monster Damage On the Fly

One other huge advantage of static damage is that we can tune monster damage on the fly based on the story and pacing. We can use the listed average but we don't have to. When I spoke with Jeremy Crawford on the DM's Deep Dive he mentioned that we are free to tune monster damage within the listed dice range, including maxing it out if we desire. This lets us tune monsters as we're running the game to hit the right level of danger when needed. That fire giant's 27 points of damage seems scary. You know what's scarier? A fire giant hitting for 43 damage every hit. That's scary.

In my experience, many of the higher challenge rating monsters don't hit nearly hard enough to threaten higher level characters. Maxing out their damage is an easy trick to increase their threat where it should be.

Sure, you can add more dice to a damage roll to get the same effect but players will notice and the swing is going to change a lot. Adding another 6d6 onto a fire giant's attack gives you the same general average damage but now the fire giant is hitting for 12d6 + 7 and that might have too high an upper threshold.

Give It A Try

Even after reading this you might still be apprehensive about using static damage for monsters. It might not feel right to you after all those years rolling monster damage. If you really don't want to use it, you certainly don't have to. You might give it a try. Maybe use it on a battle with a lot of enemies whose damage variance is largely inconsequential. See how it feels.