Boss fights in any edition of Dungeons & Dragons haven't been easy to run well. Only until the fourth edition of D&D were boss monsters designed differently from other monsters, referred to as "solos" in that version of the game. In D&D 5th edition we now have "legendary" monsters designed to pose a greater challenge when faced by multiple opponents.

Even with these improvements, running a single boss monster against an experienced group of players with powerful and capable characters doesn't always give the boss much of a chance to pose an appropriate challenge to the characters. 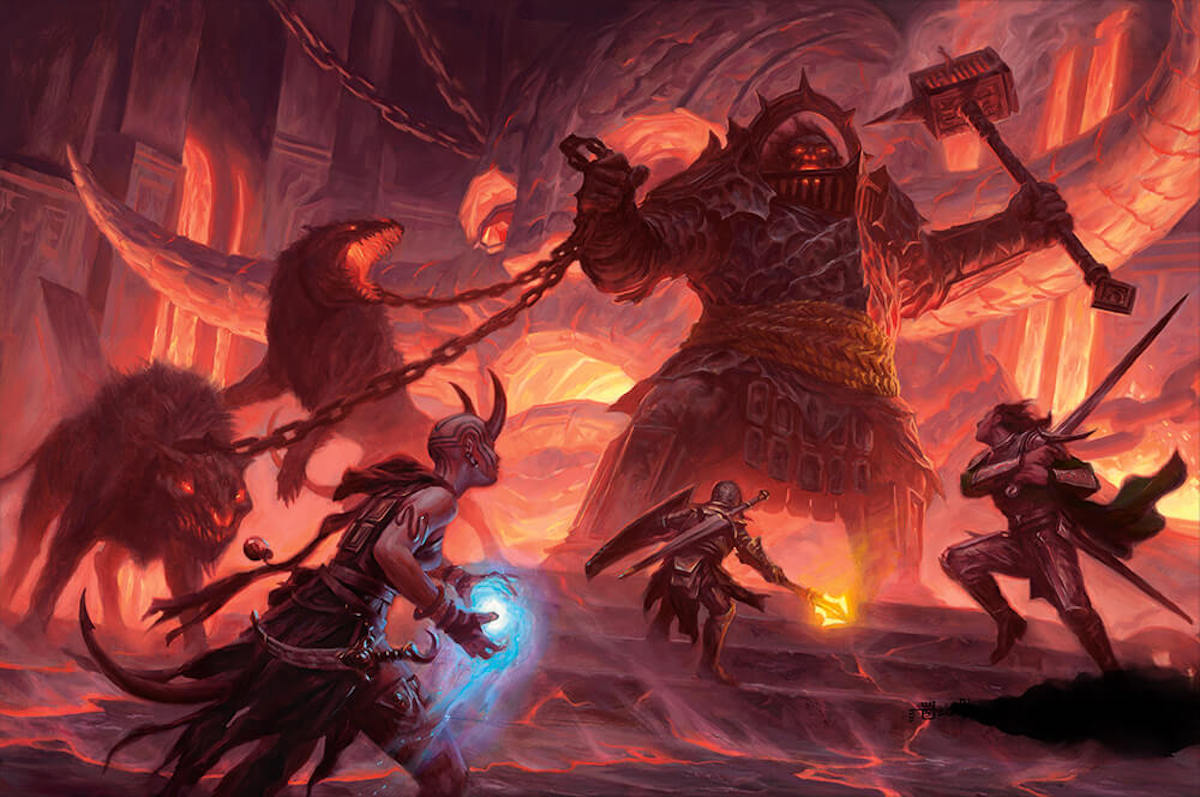 Rather than share one person's experiences and opinions on improving boss battles, I collected commonly mentioned methods to improve boss fights from a number of Twitter, Facebook, and Reddit discussions on the topic (also sometimes known as a meta-analysis). These threads included the following:

From these threads, I identified seven commonly mentioned approaches to improve D&D boss fights. Here is a summary of common trends and the number of times they were mentioned.

There are certainly other methods to improve boss fights beyond these seven but the methods above came up most often in these discussions.

We're going to take a look at each of these, going in-depth on some and just touching upon others. Each method is worthy of consideration when we look at how best to run boss encounters in our D&D games.

Add Monsters to the Fight

Let's take a moment to talk about the action economy. It isn't described anywhere in the rulebooks but it is as powerful a resource for characters and monsters as spells, hit points, attack scores, and damage values. Experienced DMs understand the importance of the economy of actions but newer DMs might not.

Each side in D&D combat has an overall number of actions they can take. If we have five characters in combat, that group has five full actions it can take. If the other side has ten orcs, those orcs have ten actions to the characters' five. That puts the action economy clearly in favor of the orcs. Even if the orcs are weaker, they have more actions which means they can do more stuff. That's the action economy.

When we think about boss encounters, we often focus on a single monster—like a dragon. In 5e, powerful monsters identified as legendary monsters have legendary actions which improve their action economy, often giving them the equivalent of maybe two to three full actions per round. Yet we sometimes assume that legendary monsters can stand off against four characters or more. If so, even with legendary actions, these monsters are still going to lose the action economy.

The easiest way we lazy dungeon masters can boost the action economy for bosses is to throw more monsters into the battle. This was the most commonly mentioned tactic for improving boss battles in D&D 5e.

Bosses don't fight alone. They have bodyguards who off-set their disadvantages. Beholders have muscle-bound thralls. Lichs have iron golems. Dragons have armies of minions and powerful constructs. Even the Tarrasque probablly has some doomsday cult following it around making sure wizards can't just fly around and kill it. When we're thinking about our boss, we can think about what bodyguards make sense for the boss and the situation.

When we're designing a boss fight, we can make sure the action economy is in order, or even against the characters, by throwing more monsters on the side of the boss.

Drain Character Resources Before the Fight

Characters entering a boss fight with all of their resources available stand a much better chance of nuking the boss before it can do anything cool. We're all about giving the characters agency and not forcing the story, but no one wants to see a beholder get cut down on the second turn of combat.

We can do this a couple of ways. First we can run characters through a full range of battles, easy and difficult, as they reach the boss. Second, we can run waves of monsters in the boss fight before the boss even shows up. The first method drains spells, hit dice, and per-long-rest effects. The second burns out per-battle effects like action surges. Now when the boss shows up the characters can't nuke it into oblivion before it gets a chance to do anything.

Savvy players will know to hold back resources during these initial encounters—which is a fine strategy. Regardless of what they choose to hold back, they'll give up something on the way. If they don't kill monsters quickly, they will suffer more damage and require more healing.

The character's don't face bosses in huge featureless rooms. They can face them on the sides of volcanos or in rooms full of ancient animated statues to which the boss can leap. Bosses might very well set up the environment to favor their own tactics and reduce the effectiveness of the characters. We must be careful, however, not to remove too much agency from the characters or it becomes no fun to play. Even in the deadliest boss battles, our job is to run a fun game. We should never forget that.

5e's recent focus on building situations instead of defined encounters leads us to the idea that the story of the boss fight is more important than the mechanics.

If things do turn into a big scrape, we can make our boss fights more challenging by improving on our boss's tactics. This isn't a very lazy technique. Understanding the exact capabilities of the boss and turning those into tactics they can turn on the characters takes some work. At the very least we should give the stat block a good review to make sure we understand how best to apply it to the battle to come.

Understand the Capabilities of the Characters

Every group and every character in that group becomes a unique challenge when they reach higher levels in D&D. This is one of the reasons why the traditional encounter balancing rules don't work in later levels. The variables are just too great.

The only way to know how to balance a boss encounter is to know the unique capabilities that the characters bring to that fight. Are they caster-heavy with a wide range of ways to limit the battlefield like wall of force? Are they a melee heavy group that can drop about 300 damage in a round of combat through rages, power attacks, haste, and action surges?

What are the ways that your particular group slices through tough boss battles? High damage output? Battlefield control? Save-or-suck effects?

We can identify these capabilities by running test battles. Savvy bosses like Iymrith and Strahd know how to test the characters either by sending in sub-bosses just like themselves or going in themselves with a way to survive even if defeated. Strahd can return to his coffin when defeated. Iymrith might send a simulacrum that acts just like she does. Our bosses can learn of the capabilities of the characters just as we can and prepare for them when they inevitably face them.

Another easy and lazy way to improve boss battles is simply to increase the hit points of the boss. If you want to stay within the rules, you can increase hit points up to the maximum for the monster. Strahd, for example, can go from his average of 144 to his max of 204. Iymrith can go from 481 to a whopping 728. We should feel free to adjust the hit points of our bosses depending on the capabilities of the characters. I'd even go so far as to say we can change them to whatever amount we wish to build a challenging encounter for the characters.

There are other dirty tricks we can play to increase the survivability of our bosses as well. Our deadly lich can have a pair of iron golems bound to it the same way a shield guardian is, dividing any damage it takes among itself and the guardians. It might even drink a potion of invulnerability before a known fight, giving it resistance to all damage.

Imagine Iymrith bound to a pair of stone golems shaped like monstrous gargoyles, a potion of invulnerability, and maximized hit points. That's the equivalent of nearly eighteen hundred hit points. Clearly unfair and likely disastrously un-fun, but it gives us an idea of the upper limits of a bosses capability to withstand damage.

Another similar hack to improve boss fights is to increase their damage output. This one was suggested by Chris Perkins when asked how to improve boss fights. If you use static monster damage, you can take the maximum damage instead of the average. If you roll for damage, add 50% more dice or so. It feels like cheating but our goal isn't to be fair, it's to provide a good challenge.

A Focus on Fun

All of this talk about improving boss monsters might actually work against the fun of the game. We might be losing our perspective. We might forget that we're fans of the characters, not our bosses. Our bosses exist not to kick the characters' asses but to make the characters look awesome. Sometimes this means cutting down a mastermind in a single hit.

If we're going to take the lazy approach, we don't spend a lot of time figuring out how to balance a boss encounter and we just drop the boss on the table and see what happens. We can also use just one or two of the ideas above, particularly in tweaking hit points or dropping in extra monsters, to up the stakes a bit.

However we approach our boss encounters, we should always remember that the goal of our game is fun. With each tweak we should ask ourselves whether that tweak is bringing fun to the game. Fun is what it's all about.