While not required to run a great Dungeons & Dragons game, great handouts can really draw players into the story of the game. They give the game a tactile feel. They show the players what the world looks like. When made well, they give players an artifact that looks like the thing their character would see. That's a whole other level of immersion into this wonderful game of ours.

Handouts are also a great way to frame the game and steer its direction. It's a way to reinforce the important points of the game to the players, remind them of important NPCs, and show them how their actions can affect the world.

There are many different types of handouts. Today we'll talk about three of them. Artwork, maps, and letters. We'll also talk about the best way to construct such handouts and how we might do so with relative ease and lower cost.

Here's a list of the types of things for which you may want to make a handout. You can read through this list while thinking about your game to figure out which handouts might make sense.

This Twitter thread had many wonderful suggestions on the types of handouts one can make and how to make them.

There are many overused metaphors for the importance of great artwork. "Show don't tell" and "a picture is worth a thousand words" leap easily to mind. There's truth to these metaphors. If we're visual people, seeing a picture of a person, place, or thing will have a bigger impact than a simple verbal description. When possible we can show art to our players of the things their characters might see. Maybe it's a monster, maybe it's a location, maybe it's an NPC, maybe it's a magic item. Whatever it is, they'll be more likely to place it and remember it if they can see it.

Making a legal physical handout of art is tricky. In the US, it's illegal to print and display a piece of art without permission. You can search for Creative Commons artwork that gives you more permissions to print yourself.

You can also save artwork to a digital photo album and use an iPad or a TV screen if you happen to have one in your gaming room to show artwork to your players during a game.

If you don't have access to a color printer, you can put together a PDF of the images you want and send them to your local Fedex print center. You can print two nice big pieces of color art for about a buck a page, a little more if you want nicer paper quality. With two to four pieces of art per page you can slice them up with a paper cutter and have some excellent art handouts for your players.

For monster art, my friend Joe at Inkwell Ideas sells a bunch of decks of monster cards with statistics on one side and artwork on the other. These cards not only help you keep track of which monster you might use in a game but can also give you a piece of artwork to show your players when the monster hits the table. 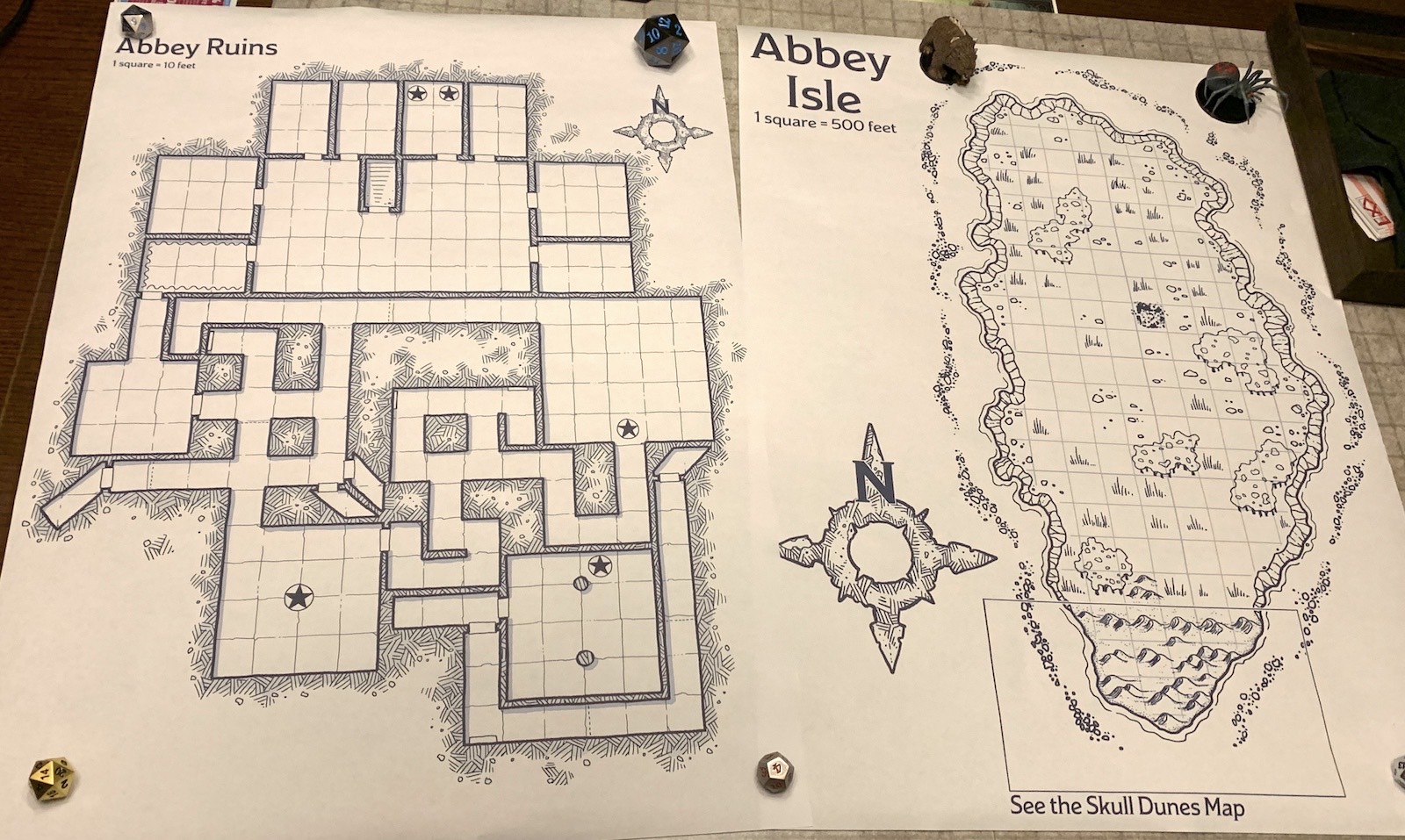 Maps of all sizes; whether it's regional maps, dungeon maps, or encounter maps; can draw your players into the world. Like Bilbo Baggins planning his journey back to Rivendell, maps capture and recapture the imagination. They take ethereal worlds and make them real. Even better are maps your players can draw on. Good maps of Chult and Omu for Tomb of Annihilation sold by Mike Schley run about $2 for a digital version and can then be printed on 11x17 paper at Fedex for about $3. A big regional map can be used for an entire campaign. Each location the characters discover can be marked on the map. At the end of the campaign you'll have a nice artifact of the journey you and your players took through the lands of Chult.

James Haeck has an excellent article about printing the maps available on D&D Beyond if you happen to buy your material there.

Dyson Logos, a true hero in this hobby, offers a huge amount of royalty-free maps you can print and use in your game. They print well on normal black and white printers or you can have them printed in larger formats at your print shop of choice. For larger dungeons, they're hard to beat.

Black and white line-art maps print very well at Staples or Fedex using theirblueprint printing services. This was nearly ten times cheaper than printing full-color maps. The Staples blueprint printing service can produce an 18x24 map for under two bucks and a 24x36 map for under four. You may be tempted to print 36x48 inch maps but they're really too big to be useful. Stick to no larger than 24x36. Using this service I was able to print every map from Ghosts of Saltmarsh for under $40.

In-world handouts can include any sort of letters, pictures, diagrams, codes, or anything else that anyone in-world might have written down on a piece of paper.

Letters are likely the most common. Letters might be secret notes sent between villains or cyphers kept by crazy old wizards. They might be notes secretly sent by sadistic vampire lords to trap adventurers in their realm of shadow.

One great way to make handouts is to use parchment resume paper and write notes using strange fonts. You can dig through your own selection of fonts or download some relevant fantasy fonts from dafont.com.

Print your notes on the resume paper, tear off the edges, and crumple them up a bit and you have a wonderful in-world note for not a lot of effort or money. Throw some red paint on there and you have the last note of the Burgomeister's agent clutched in the poor fellow's wolf-torn hand.

If you don't want to drop the money for special paper you can print on normal paper, tear the edges, and soak it in tea or coffee to give it a rustic feel.

Instead of writing your own handouts, you can find excellent handouts published by others in the DM's Guild. Creators on the guild have published handbills, notice boards, legal documents, treasure maps, and more for many published D&D adventures. These may not have the same value as a customized handout built for your own campaign but their production value may make up for it.

Beyond building a nice tactile prop to help draw your players into the game, making handouts helps you get a better grasp on what's happening in the world. Letters between villains and henchmen can tell you what a villain is thinking and what they're doing in the world. Journals can help you keep important plot points down. Secret messages and maps reinforce the important places in the world. Building handouts helps you reinforce the main beats in your campaign for both you and your players.

Drawing Your Players into the World

Building handouts as part of game prep is often overlooked yet it provides a tremendous value in bringing a whole new physical sense into our game. It's one thing to read a letter aloud or describe the contents of a journal and something else entirely to hold a letter written by Strahd von Zarovich himself in your own hands. While not a critical component of game prep, when we have the time, building great handouts can take our game to a new dimension.