When I think about D&D game prep, often I think about how to streamline it and reduce it to the elements that bring the best value to our game. This is the core idea behind Return of the Lazy Dungeon Master. How can you get more out of your game by preparing less?

In Return we boil down game preparation into eight optional steps including the following:

You don't have to use the steps if they aren't needed. We talked before about choosing the right steps given various gaming situations. We can reduce this checklist when we let other products, like published adventures, do some of the heavy lifting for us.

All of this is to help streamline game prep. We're all busy. We all have a lot of demands on our time. We don't often have more than 30 minutes to an hour to prepare for our D&D game.

But what if we did?

What if we had a full day to prepare for our D&D game? What if, on one magical day, we had no other commitments. We had no other demands on our time. And, on this ideal day, what if we managed to avoid the temptations to spend our time on video games, TV, movies, or the internet?

If we were able to spend a whole day preparing for our D&D game, where would we spend it? 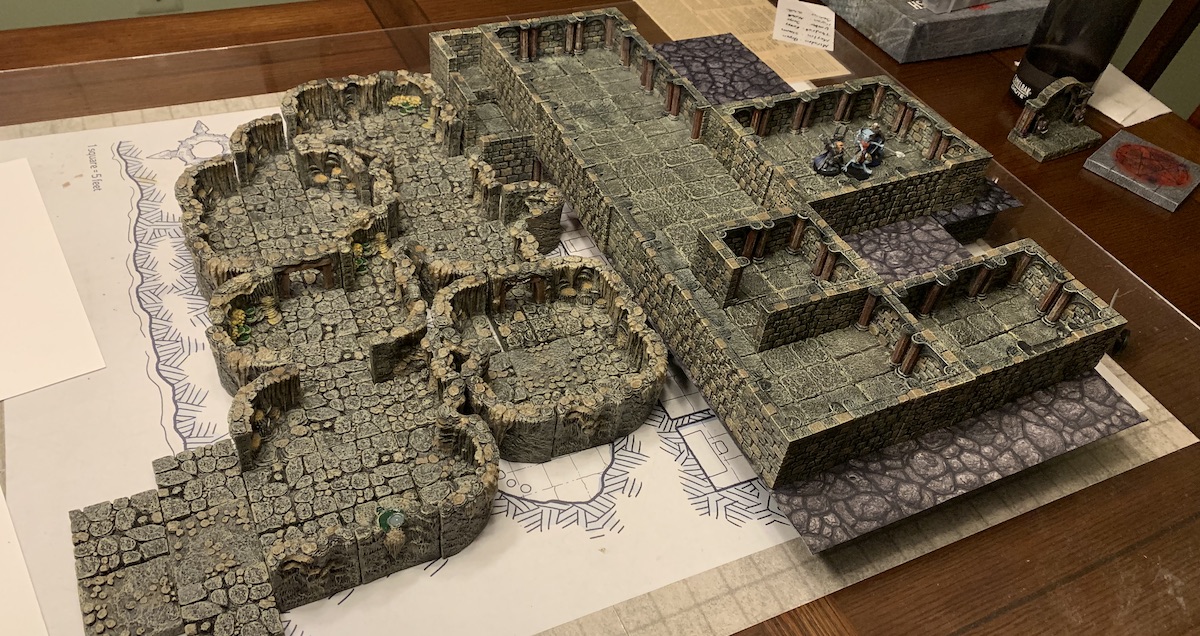 This feels like an unrealistic question to ask and some might not understand why it's valuable at all to ask it.

It matters because it helps us take a step back from the continual refinement of game prep that boils it down to 30 minutes and lets us ask ourselves what else might matter. If we had the time, what else might we bring to the game that can make a big difference?

This new angle on game prep—what if we had a full day uninterrupted to prepare for D&D—helps us look at the whole topic in a new way. We don't know what we'll find there. What other useful D&D prep activities might we discover? That's why it matters.

The most common single response was working on maps, which I thought was interesting. NPCs, encounters, characters, all were high on the list too. Props, music, handouts, terrain, puzzles; all great ideas. If we had the time, we know where we might put it.

On a particular Sunday, when I might otherwise be busy writing D&D stuff or running my regular D&D game, I found myself with this hypothetical day in reality. My game got canceled. My other commitments were taken care of. I had a full day with nothing on the agenda that I had to do. I could have easily filled it up with things, but this was the perfect chance to actually see what it would be like to spend a whole day on a D&D game.

It also came at a very good time. I had just finished up two campaigns and a bunch of Ruins of the Grendleroot playtests and both of my groups were about to start Ghosts of Saltmarsh. There seemed like no better time to spend a day preparing for D&D like at the beginning of a pair of new D&D campaigns. So I cleared off the rest of the schedule and wrote out a checklist. On Sunday, I began my day of D&D prep for Ghosts of Saltmarsh.

Other than taking an hour to talk about my full day of D&D prep on my Twitch show and spending some time wiring some power cables under my gaming table, I spent the whole day doing stuff related to Ghosts of Saltmarsh.

Here was the checklist I followed:

So how did it work out? Not so bad and I did learn a few things. Some of the things on the checklist I never got around to. I never got a prop lantern. I stuck to the Assassin's Creed Black Flag soundtrack for my campaign soundtrack but never actually used it. I only picked out miniatures for the first full adventure but they're were all nice and organized.

One of the biggest things I did during the day was get all of the Ghosts of Saltmarsh maps printed at Staples using their blueprint printing service. I was able to get about fourteen maps for $50. Some of them are obnoxiously huge, 36" by 48" and still only cost $7.50. If I had to do it again I wouldn't get any map bigger than 24" x 36" which ran about $3.75. I'd also print the 10 foot per square maps using 18" x 24" because they aren't battlemap scale anyway and the smaller format is easier to handle on a table. 18" x 24" maps ran under two bucks a piece; an amazing deal.

Getting all of the files off of D&D Beyond and into the Staples print center web page took about an hour and driving there and back took another hour. So that was a good piece of time spent on something that my players will definitely notice.

In the end, though, I barely used these maps. I tended to use them for the first couple of adventures but by the time I ran the Final Enemy, I stopped using them. I was customizing the dungeons too much to bother with a large fixed map. While blueprint mapping worked great, particularly for Dysonlogo maps, I don't know that I'd bother with it again. I can just draw them out on a dry-erase map when I want them.

Reading the Adventure with the Characters in Mind (three hours)

I think the most valuable thing we can do when we have a lot of time is to read the adventure we're running (assuming we're running a published adventure) while thinking about how we can tie the characters into those adventures. This means spending time reading over our characters' backgrounds and then reading through the adventure thoroughly to see how those backgrounds can tie back in. While we read it we can jot down some possible character connections. Here are some examples:

These interconnections between the characters and the adventures can have a strong impact in the game. When the players see why their characters would get involved in an adventure they have a much stronger connection with the story than if their characters is essentially running independently from the plotline.

These days I'm much more of a theater of the mind DM. I'll occasionally ask a player to grab one of my miniature boxes and fish out some minis for a fight but I find that the flexibility of theater-of-the-mind combat frees up the story to go in any direction it wants to go.

My players still love miniatures, though, so spending some time to grab up all of the potential miniatures I'd need to run the first chapter of Saltmarsh seemed like a good use of time. That took about an hour. That includes digging out multiple miniatures for each of the characters so the players can choose the one they like.

If time weren't a factor, where might we spend the time? Given my own experiences, here's the list I'd choose:

The Eight Steps. Going through the eight steps from Return of the Lazy Dungeon Master is still the most useful way to spend time that I can offer. With more time available we can expand some of these steps out into longer activities. We can expand out on our character reviews, NPC development, and secrets and clues. We can dig deep into our villains, their goals, and the things they'll do to reach those goals. We can map out potential treasure rewards for each of the characters over the course of a campaign. We can take each of the eight steps that apply to the type of game we're running and expand on them as much as we wish.

Handouts. Great handouts bring the players into the story of the game. It's one thing to describe a letter one of the characters finds. It's something else to hold that letter in your hand. Great handouts take time. We need to write them and edit them down so they're the kind of thing our players will actually read. Secret maps, clues to puzzles, cyphers between villains; great handouts hit new senses and wake up new parts of the brains of our players. Printing out notes on copper resume paper with cool fantasy fonts is an easy way to make a handout look great. Making handouts takes time but if we happen to have the time, they're worth it.

Maps. Who am I to argue with all of the Twitter responses talking about preparing maps? Maybe this means gathering a bunch of Dyson maps and printing them out using the Staples blueprint print center or maybe it means drawing maps. Maps help bring players into the world. They help make the world more real. That's a valuable use of time.

Miniatures. Finding the right miniatures and preparing them ahead of time can also make a nice difference. It's one thing to describe a monster and show a picture of it in the Monster Manual and something else to drop the right miniature on the table. For most people, getting the right miniature can be too costly, regardless of time. Printing out paper miniatures or digging up artwork and building tokens is more cost effective, though still requires some time. Buying and painting miniatures to represent the characters takes time but is a worthwhile activity given how long those minis will sit on the table. Using painted miniatures for player characters and tokens for monsters is a good cost-effective mix.

Terrain. I'm a huge fan of Dwarven Forge. When the situation calls for it, building out cool Dwarven Forge layouts makes the game world even more solid. As cool as it is, building out wonderful 3d dioramas won't make as much of a difference as spending time thinking about the characters and how to better integrate them into the story but if one has the means and the time, they definitely make a great game even better.

Music. I like to have some background music going while I run my games. Instead of spending a lot of time on specific tracks and playlists, I set up three general playlists: D&D Relaxed, D&D Sinister, and D&D Combat. I pick songs from a variety of video game soundtracks including Darkest Dungeon, the Witcher 3, Skyrim, Horizon Zero Dawn, Divinity Original Sin 2, and various Assassin's Creed soundtracks. I'll split the songs up among those three playlists and play them out during the game. It takes about an hour initially but one can use the same playlists for years.

The Diminishing Returns of D&D Prep

Having spent an entire day prepping for D&D I found that such time led to diminishing returns. This isn't a surprise. The whole philosophy of Return of the Lazy Dungeon Master is that less prep can lead to a better game. It was still interesting to see it in practice. I got some value out of the time I spent preparing for my Ghosts of Saltmarsh campaign but much of the value comes from spending thirty minutes on the checklist. It's worth the time to think about where our time is best spent preparing for our D&D games. We may never have a full day to prepare for our D&D game and that's just fine. Really, all we need is thirty minutes.