There's a wide range of ways we can change up or create new monsters in D&D. We might simply call one monster by another name and description, called reskinning monsters. We might change a monster's type, such as creating a fire giant wight by giving the fire giant the undead type. We might change a handful of mechanics, giving our fire giant wight necrotic damage instead of the fire damage it might do. On the very far end of this spectrum we might create an entirely new monster from scratch. Frankly, as a proponent of lazy DMing, that's not a process I recommend.

The "Modifying a Monster" section in Chapter 9 of the Dungeon Master's Guide offers excellent advice for modifying monsters to suit the story we have in mind:

Need a fiery phoenix? Take the giant eagle or roc, give it immunity to fire, and allow it to deal fire damage with its attacks. Need a flying monkey? Consider a baboon with wings and a flying speed.

In many cases, this advice alone is enough to serve as a monster template. Such small reskins are often all we need.

The Monster Manual has a few monster templates like this we can examine. Shadow dragons, dracolichs, and half-dragons all have templates.

We can extend the use of the Monster Manual by essentially using any monster stat block as a template to apply for another monster.

Ideally we can make these changes without writing anything down. We don't have to make up a new stat block. Instead, we flip between two existing stat blocks and build a new variant monster on the fly. This helps us improvise such strange monsters right at the table. 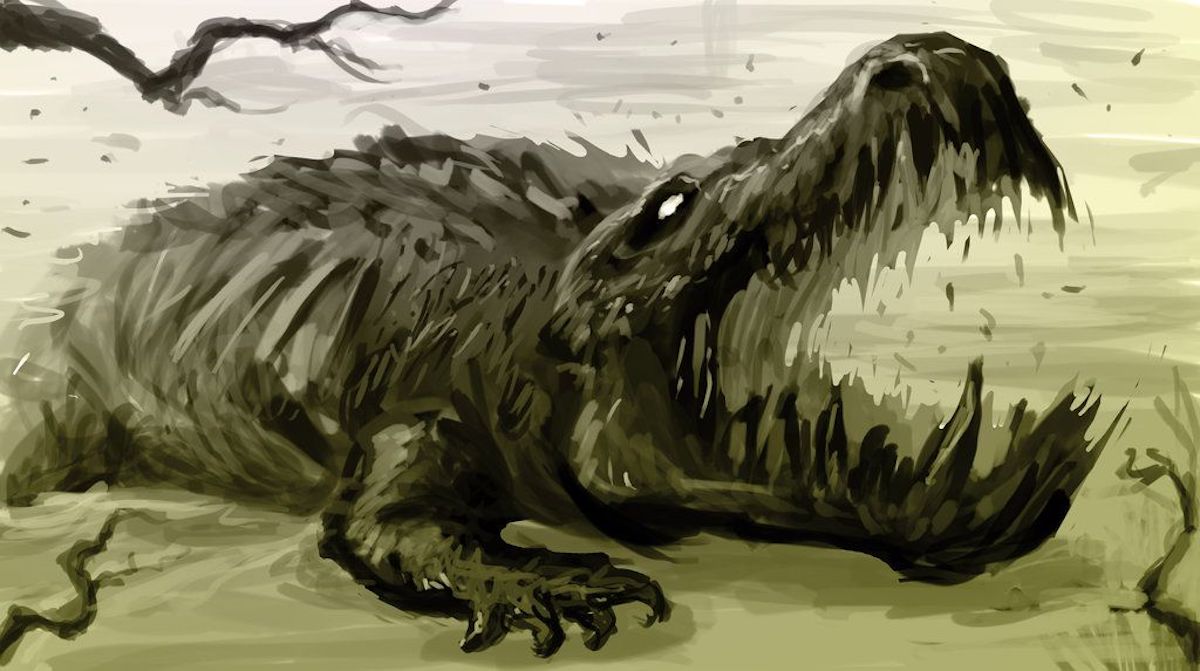 What is this terrible creature? The ghoul crocodile is an undead crocodile, created by hags, with a fiendish taste for mortal flesh. They feed off of the refuse that the hags discard or, if they get the chance, they feast on mortals they come across.

Let's go to the stats. First, we choose the stat block to which we're going to add the template. We choose this baseline stat block by picking the one that has the most attributes of our new monster. In our case it's the crocodile. We use most of the stats of this primary creature including hit points, armor class, attributes, and the like. We then apply traits from the Ghoul stat block to the crocodile, including giving it the type of "undead".

When it comes to attacks, our ghoulish crocodile has its normal bite attack but gains the paralysis of the ghoul's claw attack. That's easy to add and fun to see in practice when the crocodile bites someone, grapples them, and tries to paralyze them at the same time. Ouch!

And that's it! Our very own ghoulish crocodile without any real work. When we're running it we flip between the two stat blocks when we need to reference its abilities. No need to write anything down.

This mashup was pretty easy, but what about a harder one?

In my Storm King's Thunder game, I replaced the stone giant leader Kayalithica with a more villainous stone giant lich dug up from old Forgotten Realms lore called the Dodkong or Death King. This stone giant lich ruled over his land of Dodheim and attempted to tear open a rift between the world and the negative material plane. He was even in league with a particularly vile archlich who, like the Dodkong, sought to bring death to Faerun but that is another story.

When we look at both the stone giant and the lich stat blocks, we see that, in just about every way, the lich is the more meaningful of the two. Only its size makes a stone giant lich different than a lich. The stone giant's hit die is bigger (a d12 instead of a d8) so its hit points will be higher (18d12+90 hit points with an average of 207 and a potential max of 306). For just about everything else, we stick to the lich stat block.

Thus, the fast way to make a stone giant lich is to take a lich, increase its size, and give it a bunch of extra hit points (200 to 300 is an easy round number).

We might be tempted to spend a lot of time getting the details just right but, honestly, it doesn't matter that much when it comes to the game itself. Our time is likely better spent elsewhere like thinking about the villain's motivations, its goals, and what the characters will witness if those goals begin to get met.

Embedding Fast Modifications Into Our Head

Tricks like this bring a great value to our game. When we're able to quickly modify an element of the game in our head right at the table, we have flexibility to help us continually move the story into a fun direction. We can certainly spend an hour or two building a custom monster for our D&D games, and many DMs likely do this. Instead, however, we can recognize what matters most and wire in quick tools in our head to let the story take whatever turn it takes.