Good puzzles are a great way to keep your games fresh and interesting from week to week. A good set of puzzles on hand helps you stay away from simple and continual skill checks. As puzzle games go, the code-breaking in Mastermind is a good metaphor to apply to the fantasy world of Dungeons and Dragons. Today we're going to look at a simple way to add a mastermind puzzle to your D&D game. 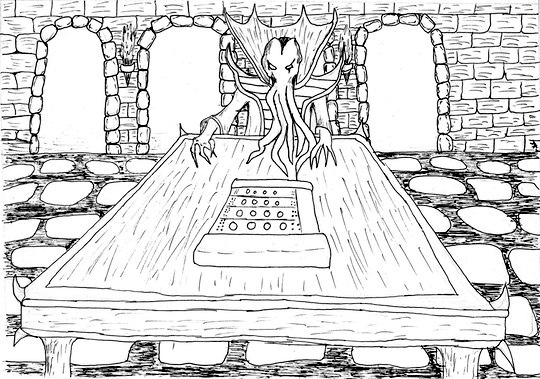 (The Mastermind Mastermind by Jay Wojciechowski, used with permission)

How to use this puzzle

This puzzle's concept is a relatively simple bit of code breaking. We will start with the simpler three-column, three-symbol version of the puzzle. As it begins, the DM chooses a secret code of three characters made from the three symbols at the top of the sheet. The DM should write the code on a 3x5 card and keep it hidden. The DM may use any of the symbols for each character even if he or she has already used it. For example, if we call the symbols H, V, and O, the DM might have OOV as the secret code.

Each correct character in the RIGHT spot results in a circle in one of the DM check cells on the right.

Every correct character in a WRONG spot results in a dot in one of the DM check cells on the right.

The DM leaves a cell blank if the player chose a symbol that is not used at all.

The DM should mix up the dots and circles as the DM check cells do NOT correlate to the attempted code columns. A symbol can only count once, so if you have one symbol in your key and the challenge puts two of that symbol in their attempt, you only mark it as correct once. If it was in the right spot for one of these guesses, you mark it as being in the right spot.

Using deduction, the PCs can try again with a new row, each time better identifying right and wrong.

If you're still confused, take a look at these instructions for Mastermind.

The three symbol, three column puzzle is the much simpler version of the puzzle. Players should be able to get the correct code after two or three attempts if they're smart about it. This sort of puzzle works well for a short puzzle or a puzzle for a single player in the middle of a battle. The four column four symbol challenge is a bit more difficult and requires more attempts to deduce the answer. It is roughly the equivalent of a level 3 skill challenge.

Incorporating the puzzle to your game

This puzzle can represent a number of in-game challenges. Most of the time, it fits well with simple arcane codes for things like magical locks, magically protected treasure chests, rune traps, or encounter terrain effects. The more simple of the two might be a simple code that a wizard has used to lock his door. The three column code might be used on a pair of lightning pillars in a battle. The code must be unlocked to disable the lighting pillar. As a minor action, a character adjacent to the pillar can attempt a code once per round.

An option along with skill checks

Puzzles like this are a nice option to offer players along with a skill challenge or set of skill checks. For example, if a PC has to disable an arcane pillar to remove the evil wizard's fire shield, the player might have a choice of either disabling it by manipulating the strange runes on the pillar (the Mastermind puzzle) or simply pouring his own arcane energy into the pillar to disrupt it (skill checks). This gives players the option to either try out the puzzle or bypass it and just go for skill checks. It lets players choose the option that is the most fun, or least annoying, to them.